How to pick the perfect moisturizer

Once the furnace kicks in, our skin starts to crave moisture. Choose the cream that'll work for you 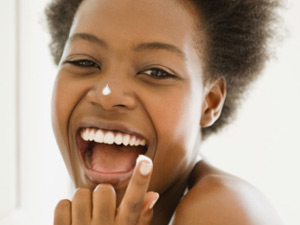 1. For parched skin
For dry and cracked skin, choose a thick, oil-based moisturizer with urea or propylene glycol, says Benjamin Barankin, a Toronto-based dermatologist. “These last longer than water-based lotions because they prevent water from evaporating off the skin.”

2. For oily skin
Even if you tend to have an oily complexion, your skin still needs moisture. If breaking out is a concern, make sure your moisturizer is non-comedogenic, meaning it won’t clog pores. Go for a light, oil-free, water-based lotion with lactic or glycolic acid as well as alpha-hydroxy acid, which has a mild peeling effect, to help clean up blackheads and smooth skin texture. “If brown spots are starting to develop from sun damage, alpha-hydroxy acid will help lift them before they set in,” Barankin says.

3. For irritated skin
Redness and itchiness indicate a sensitive skin type. Stay away from creams that are loaded with fragrances and dyes.
“The more chemicals you’re exposed to, the more likely you are to develop an allergy,” says Barankin. Look for a moisturizer that’s made specifically for sensitive skin. “Most will find that Cetaphil [with dimethicone, an emollient, organic silicone] works for them,” he says.

4. For ageing skin
Helen Mirren and Miley Cyrus wouldn’t share the same moisturizer any more than they’d wear the same jeans.
Dry skin is more common as a woman ages because the skin’s oil-producing glands slow down. Try oil-based moisturizers that resemble a thick, buttercream frosting, namely ones with shea butter, glycerine and petrolatum. Barankin says that vitamin B3; is gathering buzz because it helps moisturize, improves blotchiness and reduces fine lines. Soy-based moisturizers are also reliable hydrators and help clear sallow complexions.

5. For a glow from within
“Skin is a reflection of what you’re eating,” says Elena Krasnov, a naturopathic doctor in Toronto. “If you’re eating junk, your skin will look like it.” Consuming foods rich in omega-3 fatty acids can combat dry, dull skin because these fats lubricate all of the body’s cells. “Eating salmon, flaxseeds and soybeans will help reduce inflammation and keep scaly skin at bay,” says Krasnov.
Kiwis, papayas and tomatoes are high in vitamin C, which helps in the synthesis of collagen – a protein that keeps skin taut and elastic. High in collagen-supporting zinc, pumpkin seeds, chicken and lentils strengthen skin’s elasticity and can prevent dandruff, too. Krasnov recommends splurging on organic food because it has more nutrients than regular food does.