Man about town and fashion journalist David Livingstone travels the world interviewing designers, models and famous editors. For our 85th anniversary he gives us a backstage pass to this ever-changing industry. 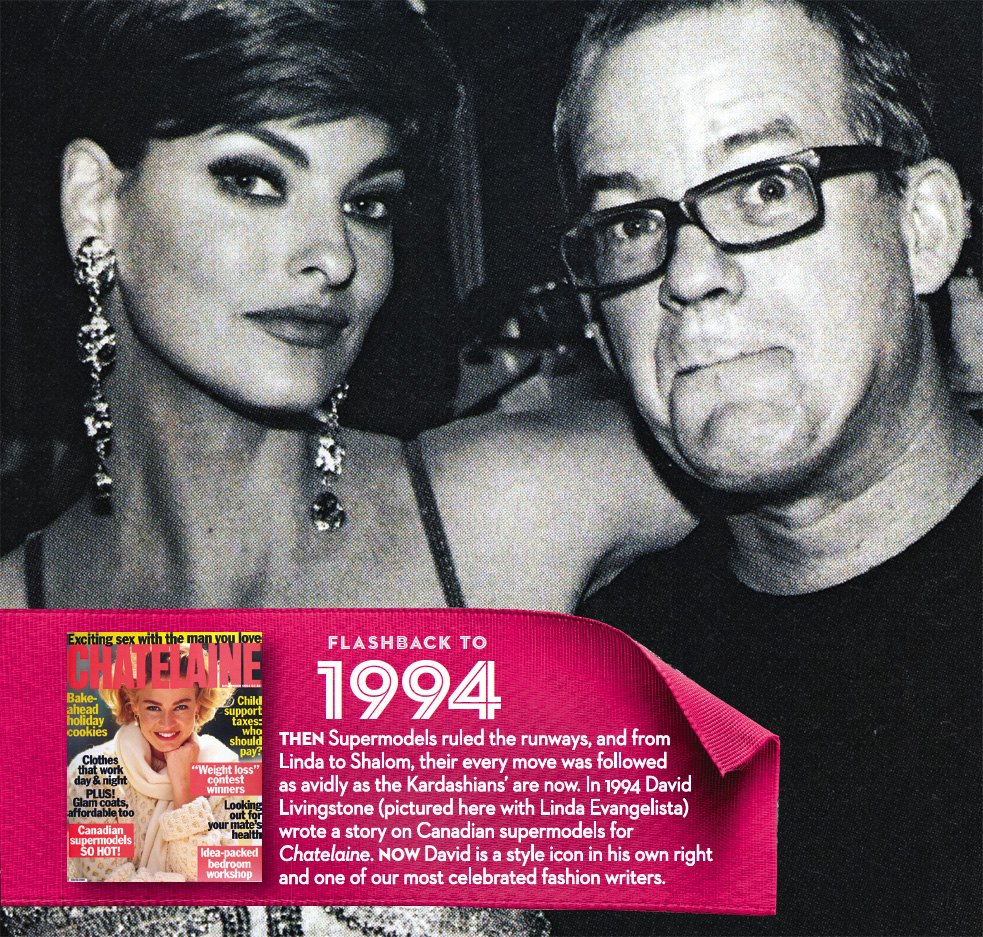 Photo from the Chatelaine Archives

In the very first issue of Chatelaine, March 1928, there’s a photograph of a frock made of jersey that’s described (in a caption) as being “increasingly one of the most favoured of the sports and informal fabrics” and coming from “among Billie Burke dresses.”

Maybe it’s just because I’m a fashion writer with a talent to be amused by trivial matters, but I get my kicks from such a cutline. Somehow, it makes real the legend of jersey and how that kind of knit material was considered lowly until Coco Chanel got her hands on it and turned it into the stuff of modern womanhood.

Then there’s the fun of thinking that Victoria Beckham is the new Billie Burke. The warbly-voiced actress who won immortality as Glinda, the Good Witch of the North, was an early example of celebrity as commodity. Her name attached not only to dresses but also to hair extensions. “Billie Burke curls,” which could be clipped to the back of your head, were sold in every department store in America.

Burke wrote all about them in her autobiography, With a Feather on My Nose. It tickles me to have a library copy of the book at my feet as, hunched over the keyboard, I try to convey the joy I get from fashion.

Don’t get me wrong. There are some other times you’ll find me ranting and raving about the snobbery, shameless promotion, unembarrassed consumerism and ill-informed commentary that can make you turn against the very idea of style itself. But when Chatelaine’s current fashion and beauty director, Catherine Franklin—who, like me, had the privilege of travelling to New York and Paris to cover the shows when only a handful of other Canadians were invited — asked me to celebrate the magazine’s 85th anniversary, I could hardly bring such sour thoughts to the party. And I have memories that are candy.

Some are memories of cloth. The weight of a Galliano gown removed from its hanger and collapsed in your arms, a body of satin. The impossibility of figuring out — even when you held them in your hands — pieces by Rei Kawakubo of such strange beauty that they laugh at words and say what they have to say on the body. And I can tell you that, even on this body, they are like nothing else, proving the inexhaustible pleasure that clothes can bring.

It seems like old-school lingo to speak of clothes as “creations,” but you know they are to the designers who create them . I’ve met some swell ones, many of them on these shores. Alfred Sung has never failed to impress me with his discretion, consistency and appreciation for the fine art of laundry. Lida Baday is a hostess with the mostest . I’ve never visited her showroom without being grateful for her fine art of hospitality. Marie Saint Pierre from Montreal as well as Joyce Gunhouse and Judy Cornish, the Toronto-based designers behind the Comrags label, must count — out of the whole wide world of fashion — as among the most honest and unpretentious talkers.

In the course of covering the fashion beat, which can feel like a narrow path between the mirror and the cash register, a rock and a hard place, I’ve met engaging personalities and borne witness to amazing productions. I remember my first Armani show. It still hangs in my mind, a storybook picture of perfection: flaming candles leading to an old Milanese building — let’s call it a castle — wherein unfolded a graceful procession of rags, unimaginably delicate and fine.

Ripping the doors of perception from their hinges, the theatrics of Alexander McQueen were of a sublime order all their own. He threw politics, religion and sex into a witches’ brew that gave off steaming visions. His themes were Hitchcockian, Gothic, inspired by pulp fiction and sometimes drawn from his own private hell.

We all know that kind of inferno. But, as a man who has often reported on women’s fashion, I’ve had glimpses of paradise, encounters with some extraordinary women.

I’ll always treasure the way the iconic magazine editor Diana Vreeland validated my nosiness. When I interviewed the late, great editrix, she was working at the Costume Institute at the Metropolitan Museum of Art in New York. When conversation turned to the subject of shoes, she immediately ducked beneath her desk and resurfaced with her shoes, which she proceeded to plunk in front of me. After that, I have never been embarrassed about asking, “What are you wearing?”

Perhaps I should be. I learned that from another sort of fashion journalist. When I interviewed Kennedy Fraser, she was writing about fashion for the New Yorker. She forbade personal questions of any kind.

And I have chinwagged with great cheekbones. Try going face to face with Linda Evangelista and not being mesmerized by the glorious sweep of her countenance. In going through old issues of Chatelaine, I encountered other remarkable women. Some — Billie Burke — I never met. One I knew. She was Vivian Wilcox, a fashion journalist who spent many years editing the fashion section of this magazine. 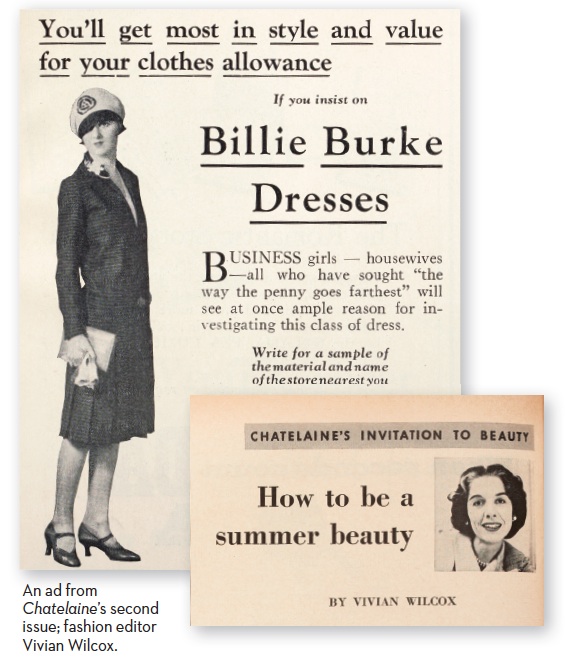 I would see Wilcox at fashion functions. Hers was an understated elegance, marked not so much by what she wore but by her manner, always polite and gracious, impatient with gossipy remarks. She also knew how to mix a cocktail. I interviewed her once at her home. There, she offered a choice of drinks, displaying an authority and sophistication that was an unexpected benefit of the pleasure of her company.

Wilcox and I also lived in the same Toronto neighbourhood. In recent years, I’d run into her, and she would talk excitedly about being a volunteer at the Art Gallery of Ontario.

When I encountered her name in the Chatelaine archives, I realized I hadn’t seen her for a while. Working with me on this piece, Franklin — no slouch in the understated elegance department — found the obituary online: Vivian Wilcox, 1918– 2011. But hey, let’s get this party started. Here, Vivian, a sidecar? Old-fashioned? Whisky sour? Whatever cocktail you made for me — this one’s to you!