How to find a pretty bra that fits large boobs

If you have an ample chest, you might think you have to go for a support bra over a pretty bra. But you can have both. 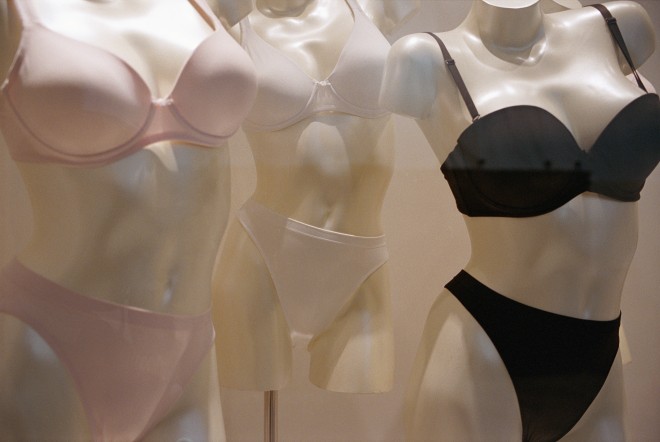 I had not been fitted for a bra since the eighth grade and let me tell you, at 24, my bust looks a lot different than it did a decade ago. I’ve matured in the last ten years , and my body has seen a few changes (losing the fight against the Freshman 15 being one of them).

I am now a busty, D-cup-wearing woman. At least I think I am. That’s the problem – I’ve adjusted for my size over the years, but I haven’t been professionally sized since that first fitting. I think it’s because I’m scared they’ll tell me I’m a DD, and I really don’t want to be any bigger!

Every time I go bra shopping, or even pass by a display of pretty, unpadded, lacy brassieres in a store, I dream of having perfect B-cup breasts. I imagine I would look better in every bra, and every outfit in general, if my boobs weren’t quite so big. I daydream about quickly throwing on a shirt without a bra, or going for a run without donning my ‘Ta Ta Tamer’ sports bra (actual name). I hate that my bra collection is all large, lightly padded bras with thick shoulder straps and 3×3 clasps.

And so, 10 years later, I decided it was time to get over it and have a professional fitting, just in case I am a DD and wearing the completely wrong size (80 percent of women are!). Recalling my only other bra fitting, though, is when my nerves kick in. It was awkward, to say the least. In the face of puberty, a girl’s confidence isn’t exactly skyrocketing, and to be in the change room with a fully developed saleswoman can be, well, intimidating. She wasn’t exactly sensitive either. All I remember is that she charged in to the change room, asking me, “Are you shy?” Standing there in my sports bra, red in the face, I wanted to scream, “Yes!” But it turns out I was too shy to say I was shy.

That previous trauma was forgotten last week when I walked into La Vie en Rose. To start, instead of asking me to de-robe, the woman doing the fitting introduced herself and told me she could either measure on top of my shirt, or if I was comfortable, in just my bra. (My prior experience prepared me, and I wore a camisole under my shirt). She made me feel comfortable and confident about my size.

After taking two quick measurements, she declared my size and it turns out I’d been wearing exactly the right one! What a relief. We then walked around the store and she recommended styles for my size. I spotted a pretty, unpadded, lacy brassiere – just like the ones I fantasize about, but assumed I needed smaller boobs to wear and next thing I know, she’s recommending this exact style to me! Turns out I’d been wrong all along. I thought padding was a big part of the support, but it’s not. Bigger-busted women can wear these lacy, unpadded bras, as the majority of the support comes from the torso band, not the straps or cups.

Trying it on immediately, I was thrilled when the salesperson told me it fit perfectly. As a result of getting over my fear of being professionally fitted, I discovered I could actually wear my dream bra.

Later I spoke with Sarah Giroux, the design and product development supervisor for La Vie En Rose, who answered some of my busty-bra-buying questions:

Q: Are there certain styles that are better suited to bustier women?

A: The majority of full-busted women want a lightweight pad that moves with their breast. I would recommend a fuller cup with a slightly wider shoulder strap, and slightly wider hook and eye at the back. You really want a bra that provides support. It’s important to feel pretty obviously, but you want the support.

Q: I was under the impression that a little bit of padding was good support for fuller-busted women, but that doesn’t always seem to be the case .

A: Some people do not want their headlights to show, ever, and that is true for everyone from small-busted women to large-busted women – I think that’s really a personal debate. The padding does not necessarily always mean more support. You can have an unlined, unpadded bra that provides perfect support because you’ve chosen the right size and the torso band fits you properly. The torso band provides almost 80 percent of the support of your bra – if it fits properly, the cups are really just holding your breasts in place and the shoulder straps are attaching the cups to the back of the bra. It’s not necessary that you have an old-style, rigid bra with panels and seaming for support; you can get away with a lightweight, very breathable bra. There are a lot of newer fabrics that give you support without the padding.

Q: How can a properly fitted bra affect the way a fuller-busted woman looks and feels?

A: The first thing it will do is put your breasts where they’re supposed to be to help out your silhouette, this will help you look thinner instantly. Boobs that are down to your waist are not advantageous to your shape, nor are ones that bulge out the top of your bra and create four boobs. A properly fitted bra can also improve posture. If your breasts are not supported properly by the torso band you tend to slouch forward, your shoulders curve and your back and body weight is not distributed properly through your spine. It really does have a function to keep you standing up right and to help ease the weight off of your back from your bust.