I Tried The Hot New Alternative To Microblading. Here’s What You Need to Know 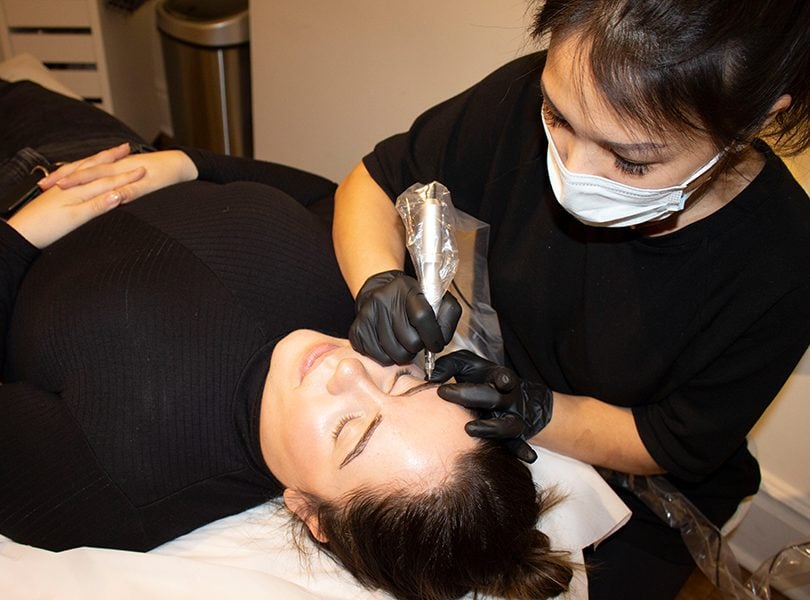 My mom taught me many things, but there were three takeaways that reigned supreme: the importance of investing in RRSPs, the life-changing magic of therapy and to never—under any circumstances—mess with my eyebrows. But since not one woman from my generation heeded their mother’s advice on the brow front, in recent years we’ve leaned into beauty innovations like microblading to correct our sorry over-tweezing.

The semi-permanent solution offered thin- and sparse-browed babes a natural-looking, long-lasting filled-in effect that wouldn’t have to be drawn on every dang morning. So naturally thousands of us rushed to get the procedure done. Unfortunately, the results varied.

If you’re heard about microblading, you’ve probably also heard a million and one horror stories about women ending up with Sharpie scribbles for brows, discoloured fading or worse. Veronica Tran of Pretty In The City knows this pain all too well. It took a decade (a *decade*) for her botched job to completely fade away—and it’s the reason she now considers eyebrows her passion. The expert esthetician understands facial tattooing better than most, and she’s become the go-to for corrections with clients flocking from across Canada.

Tran uses a combination of traditional microblading with a newer technique that is gaining in popularity—ombre powder brow—which she tailors to the client’s natural brow shape, skin type and desired results.

Turns out, my overzealous waxing and plucking made me the perfect candidate for the powder brow technique; so, I decided to test it out and report back on whether this latest, greatest brow saver actually lives up to the hype.

What is the difference between microblading and powder brows?

According to Tran, the biggest difference between the two techniques is how the pigment is deposited into the skin. Unlike microblading, which uses a pen-like hand tool to carve small cuts into the skin, the powder brow technique is achieved using a machine, not unlike one your tattoo artist would use. With the confidence of someone who has at least one fugly body tattoo and lived to tell the tale, I took a seat in her chair to begin the process.

Using a single needle, Tran deposited pigment into the skin in hundreds of tiny dots that create an overall powder-like effect—which is unlike microblading, where additional pigment is deposited after the cuts are made. The result is a less harsh, more controllable colour that she can tailor to her client’s wishes. “I can stop at just a few layers and it’d be nice and light, but sometimes people like it a little bit darker,” she explains.

Which technique is right for you?

For the unfortunates who have basically zero natural brows, the powder technique is the way to go. “If someone doesn’t have a lot of hair, or if someone has no hair, I would never do microblading on them because it just ends up looking like lines on their face,” Tran explains, adding that she would also opt for powder on someone with dense front brows and little hair in the tail end—a common brow woe.

Similarly, someone with thin, oily skin (like myself) wouldn’t be a good candidate for traditional microblading because the oil would cause the lines to blur in a matter of months. You know how you have to dry out a wound for it to heal? Same goes for tattooed brows, where natural oils from the skin can prevent the cuts from healing properly.

Powder brows also age and fade well—a concern lots of would-be microblade clients have. “It’s diffused powder, so when it fades it just gets lighter, and lighter, and lighter,” Tran says. “It looks good longer, so it doesn’t require a touch up quite as soon as you would for microblading.”

In my non-expert experience, it’s a great option for people who have decent natural brows and minor imperfections. Or for people who are lazy and want to shave off five minutes of their morning routine by skipping the brow pencil. (No judgment, it me.)

How does the powder brows technique work? 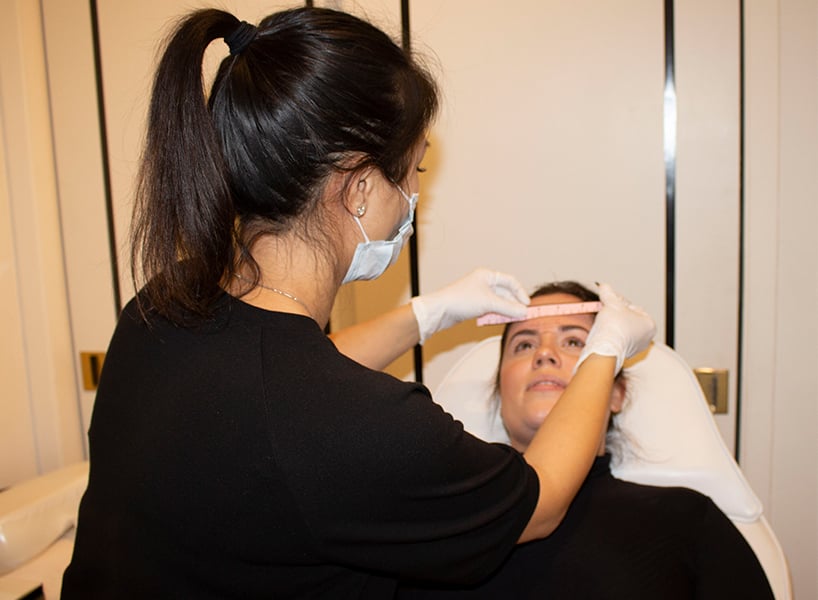 For my first visit to Tran, we spent about 15 minutes laying out where she would tattoo my brows with her own mapping technique using wax-covered strings for accuracy, as well as hand-drawn lines. Though my brows have a nice natural shape, our goal was to fill in bald spots and even them out.

If you’ve never been tattooed before, the process can feel a little scary. After all, having a stranger with a tattoo gun near your eyeballs isn’t exactly comfortable. (Was I going to end up looking like Post Malone?) But after chatting for a while with Tran—and given my own experience with tattoos on other parts of my body—I felt at ease.

Next, Tran applied a numbing cream that helped with the slight sting as she got to work. It did begin to wear off during the procedure, but the pain was bearable. While the full process—including mapping, waiting for the numbing to kick in and the actual tattooing—took three hours, it really didn’t feel that long. Though I couldn’t talk (and had my eyes closed) through most of the tattooing, Tran kept me entertained by sharing her own brow story, and kept me up-to-date on my brow’s progress the entire time.

I left that day with very defined brows and a bit of redness that was gone by the next morning. I made sure, per Tran’s instructions, to sleep on my back, so as not to disturb the tattoo or remove the scabbing as it healed. This is super important, because the colour is not fully vested until the wound is healed—disturbing it by scratching, harsh washing or applying pressure can remove colour in those critical first two weeks.

Over the following few weeks, the tattoo began to shed slightly, which is a completely normal part of the healing process. Tran advised me to clean the area with an unscented soap morning and night, and apply an antiseptic ointment. After about two weeks, my brows were completely healed and looking like I’d lightly filled them in with a pencil.

Like for every other client, a one-hour follow-up was booked at the end of my initial visit for about a month later. During this appointment, I asked Tran to fill my brows in a bit darker and add just a few strokes of traditional microblading where I had more noticeable bald spots and to give my brows a slightly more feathery effect. Using a hybrid technique, Tran explained, lets her create the perfect brow for her clients based on their individual needs.

These are the kinds of tweaks Tran says are done during the second appointment. Not everything can be accomplished in the first sitting, which wholly depends on the client’s skin type and how well it responds to the tattooing.

What are the results? 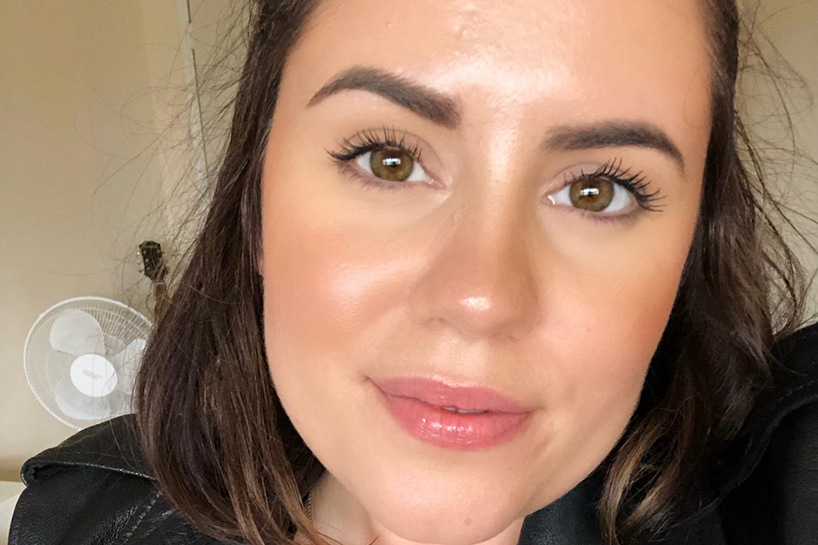 Now, nearly two months after the first appointment, I never have to fill in my brows. On nights I’m going out and want a bolder look, I’ll outline them with concealer and throw on a light layer of brow gel. But that is it.

The small imperfections—like uneven brows, bald spots and thin ends—I once noticed are virtually gone—and the slight lift in my brow shape effectively lifted up my entire face. Going into a soon-to-be sweaty summer, I’m feeling #blessed that I won’t have to fill in my brows before hitting the club or going to the beach. There’s been absolutely zero fading, and I shouldn’t notice it for a few years, Tran says.

As for downsides? They’re minimal. You have to avoid exercise (sweating) for two weeks and tanning for a month after the procedure. Sleeping on your back can take some getting used to. For me, it was worth it.

How much does it cost?

Tran’s eyebrow tattooing services, including traditional microblading and ombre powder brows, start at $625, and a combination procedure, like mine, costs $675. For this review, Tran provided me with a complimentary procedure.