Everything You Need To Know About Rosacea

Experts weigh in on how to treat and manage the chronic skin condition. 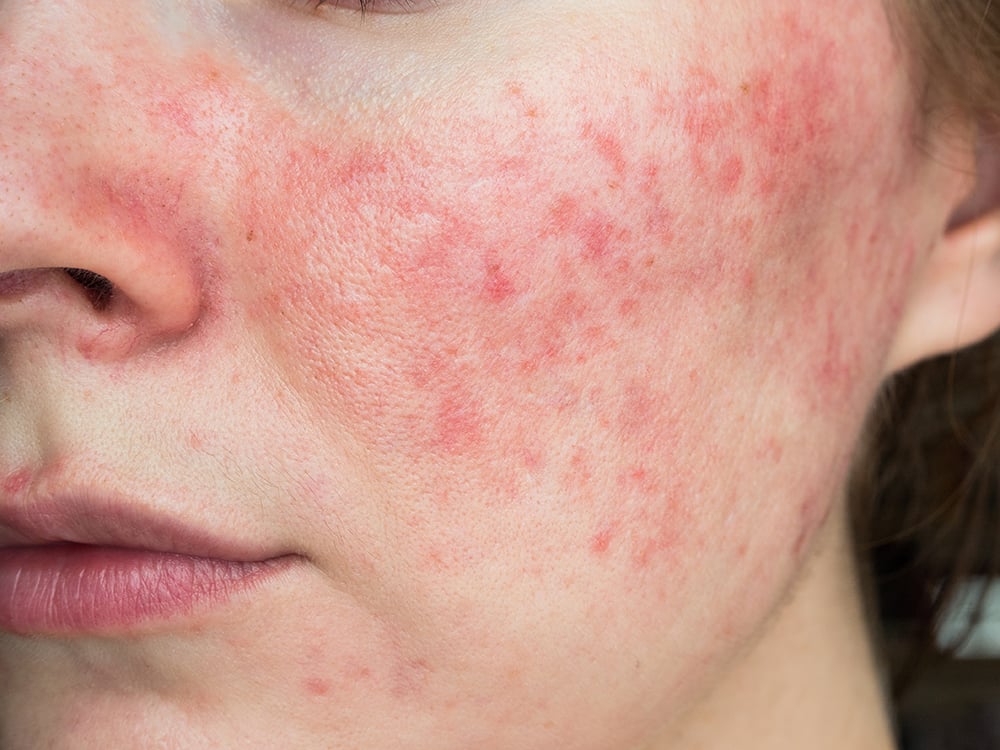 If you suffer from persistent patches of inflamed red skin, you’re not alone. According to the Acne and Rosacea Society of Canada, more than three million Canadians live with rosacea, a chronic skin condition that causes excessive redness, swelling and uncomfortable sensations around the cheek, nose, chin and forehead.

We asked Dr. Renita Ahluwalia, a dermatologist at the Canadian Dermatology Clinic, and Dr. Julia Carroll, co-founder of Compass Dermatology in Toronto, for the lowdown on the condition, as well as their best advice for how to treat and manage it.

Rosacea—pronounced row-zay-sha—is a chronic skin condition that is most often visible on the cheeks and nose (though the chin, ears, scalp, forehead and chest can also be affected). Its symptoms include redness, flushing, excessive blushing, swelling, dilated blood vessels, as well as papules (swollen red bumps) and pustules (swollen bumps filled with pus). While rosacea often looks like acne at first glance, the condition doesn’t produce whiteheads or blackheads. In more advanced cases, it can also cause thickening of the skin, and sometimes affect the eyes (a condition called ocular rosacea), making them red, itchy and gritty.

Rosacea also comes with a slew of invisible symptoms, like sensitive skin that’s easily irritated, as well as burning or tingling sensations around the affected areas. Although it isn’t a life-threatening condition, rosacea causes inflammation (which activates your immune system to fight off foreign invaders), and chronic inflammation can damage your tissues and organs in the long run. This means that managing symptoms of rosacea is important for maintaining overall health.

Anyone can experience rosacea, though it most often presents in women with fair skin between the ages of 30 and 50. When men develop it, they tend to suffer more severe symptoms than women, notes Carroll.

Rosacea also takes a mental health toll that can, in turn, make the condition worse. Patients are often self-conscious about their skin, says Ahluwalia, and stress is a common trigger for rosacea flare-ups. A flare-up occurs when rosacea symptoms worsen for a period of time—typically one to three months—and even patients whose rosacea is under control are likely to experience them a few times a year.

The exact cause of rosacea is unknown. The condition is believed to have a hereditary component—people with a family history are more likely to develop it. If rosacea runs in your family but you’re not currently experiencing it, Carroll still recommends wearing sunscreen every day and using gentle skincare products, as this can help delay the onset of symptoms. Ahluwalia also notes that people with rosacea tend to have frequent migraines or a family history of migraines, though the link isn’t yet understood by the medical community.

Common triggers include stress, alcohol, spicy foods, hot drinks and excessive heat or sun exposure. What causes a flare-up varies from person to person. “Each trigger doesn’t affect each rosacea patient the same,” says Carroll. “Some are more triggered by one thing and less by another.” Part of the journey is figuring out what triggers—and doesn’t trigger—you.

How is rosacea treated?

Rosacea is a chronic skin condition, which means it can’t be cured. However, it’s important to seek medical help—flare-ups and symptoms can be managed with the help of a dermatologist, who will create an individualized treatment plan. “Someone with rosacea will always be on some type of treatment program,” says Carroll. Some people are able to take “holidays” from their treatment plan when their symptoms are under control (a decision that should be made with the advice of a medical professional) and return to their dermatologist only when needed, while others continue their treatment long-term.

Treatments vary based on the type and severity of rosacea the patient has, but overall relies on topical creams, oral medication and laser treatments, as well as figuring out (and avoiding) your individual triggers. Determining what factors might trigger your rosacea can take time, but it’s crucial to devising an effective treatment plan. If you’re unsure what your triggers are, Ahluwalia recommends avoiding the common culprits at all times and working with your dermatologist to come up with a skincare routine and medication plan (if needed) to manage symptoms.

Topical creams use active ingredients such as azelaic acid (which helps with hyperpigmentation caused by papules and pustules), ivermectin and metronidazole (both of which are known for their anti-inflammatory properties). Oral medication typically involves antibiotics derived from a class of chemicals called tetracyclines that also fight inflammation. Laser treatments and broadband light also help treat rosacea symptoms, but the cost is steep: one treatment session costs around $500, and a minimum of three to six sessions is needed to notice improvements, says Ahluwalia. (In some instances, these treatments are covered by insurance.) “Through a multitiered approach with skincare, medical prescriptions and in-office procedures, people often get great results,” she says.

What should my skincare routine look like if I have rosacea?

A simple skincare routine is key. “You don’t want to use too many harsh active ingredients,  [like retinol or chemical exfoliators],” warns Ahluwalia. A soothing cleanser, a gentle vitamin C serum to reduce redness, a lightweight moisturizer and a daily mineral sunscreen (one that contains mineral-based filters like titanium dioxide and zinc oxide and reflects UV rays off the skin, as opposed to chemical filters that absorb UV radiation and convert it to heat) are staples for those with rosacea.

Rosacea-prone skin is sensitive, and certain ingredients are likely to irritate it further. Products with alpha-hydroxy acid or beta-hydroxy acids (which include popular actives like salicylic, glycolic or lactic acids) should be used with caution. If you want to incorporate these into your skincare routine, do so gradually and work with small amounts at a time, says Ahluwalia. The same goes for exfoliating scrubs, which can irritate or strip the skin of much-needed moisture. She also recommends avoiding the use of retinol, as well as products that contain fragrance.

What is the best way to cover it up without exacerbating the symptoms?

Ahluwalia recommends using mineral-based makeup [from brands like BareMinerals and Ilia, for example], adding that products with a green tint can help counteract the redness that comes with rosacea. If you wear makeup, it’s important to remove it properly—opt for micellar water to melt the makeup instead of harsher facial wipes, then cleanse your face with a gentle hydrating cleanser and cold water. Ahluwalia recommends choosing cleansers with a pH of 5.5 [such as Fresh’s cult Soy Face Cleanser or La Roche-Posay Toleriane Dermo-Cleanser], which is similar to that of your skin.

Below, we’ve rounded up a few products that may help keep rosacea in check. 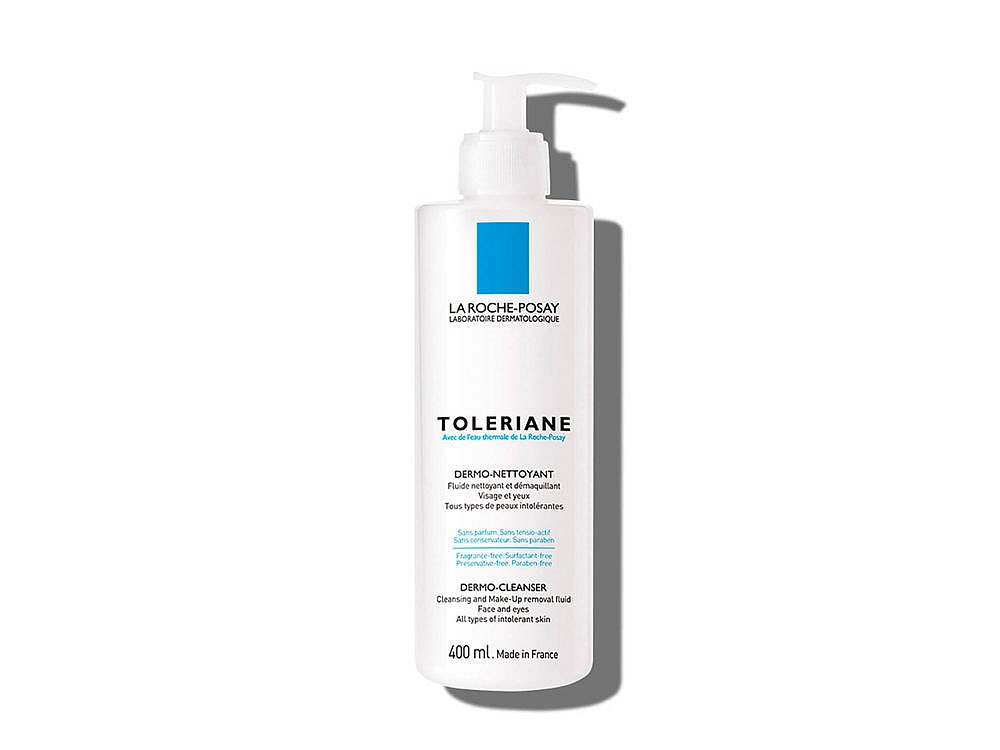