Accepting My Grey Hair Made Me Happy In My Own Skin

'As I drained my hair of its colour,' says 43-year-old editor Christina Vardanis, 'I was also slowly draining the power it held over me.' 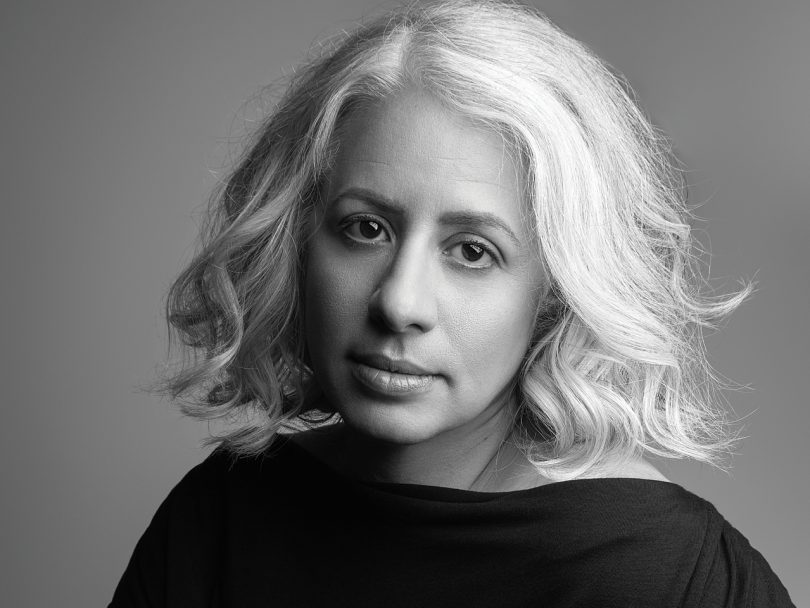 I started going grey in 2002, when I was 26 years old—or, put another way, about four decades ahead of schedule. So I did what any other brunette who lived through the Rachel Green hair era would do: poured litre after litre of dye onto my head, along with hundreds of dollars down the drain.

Back then, I saw it as a small price to pay to show the world that I was, in fact, young. It didn’t matter that other than my hair colour, I looked exactly how you’d expect someone in their mid-20s to look. Back then, the game was played from the forehead up. “There’s a reason why 40, 50 and 60 don’t look the way they used to, and it’s not because of feminism or better living through exercise. It’s because of hair dye,” Nora Ephron wrote in her incisive memoir, I Feel Bad About My Neck. This was certainly true in my world. The only grey-haired women in my cultural orbit were grandmas, the Queen and three out of four Golden Girls. Even my mother had refused to accept her grey.

I’d bought into the idea that going grey would mean I was no longer relevant; giving into it was like raising a white flag on life. It didn’t help that I’d always had a tortured relationship with my hair. I never learned how to properly wield a blow-dryer or straight iron. I couldn’t French braid or even execute a decent ponytail. It sounds insignificant now, but my lack of ability to “do” my hair stoked a deep-seated insecurity that I was bad at being a girl. As actor Zendaya Coleman once profoundly told The Cut: “It’s not just hair…. It’s never just hair.”

So I held on tight to what I could control: the colour. Every eight weeks I’d blow three hours at the salon, waiting for the dye to restore my confidence and reflect my rightful age. As I got older, the grey became more aggressive and eight weeks turned to five. By the time I hit 40, I was seeing a colourist once a month, to almost no effect. My roots seemed to grow longer by the day, like some kind of achromatic army steadily advancing its front line in a march toward middle age.

As my grey was speeding up, other things, like my metabolism, were slowing down. I started to feel vulnerable about wrinkles, the fact that my boobs seemed to be magnetically attracted to my toes and a whole host of other indignities. My hold on the dye bottle became more of a death grip. So when a younger colleague pointed to my roots one day and asked why in the world I’d dye my hair—“Don’t you know people are paying big bucks to get your shade of white?”—I just about laughed her out of the room. She pulled up pictures of Jenners and Hadids and their trendy “granny hair,” which only made me laugh harder. But she didn’t back down. “Your dye job looks desperate,” she said. (She was known for being…direct.) “Just own it, and you’ll be a fox.”

I was pretty sure the difference between “fox” and “wizard” was razor-thin. Still, she got me thinking. Why, when I had consciously refused to buy into so many other ideals of beauty, could I not let go of this one? Then I did the math: 14 years of near-monthly salon appointments meant I’d already spent about $20,000 to keep my grey at bay. The thought of pocketing the next $20,000 sealed the deal.

I decided to stop cold turkey— no highlights or bleach—and accept that while I might not like the outcome, I couldn’t keep outrunning destiny.

It wasn’t easy—and nearly every assumption I had about how the world viewed grey was confirmed along the way. Like a ring in a tree trunk, the sharp line between my natural roots and dyed ends showed exactly how long it’d been since I’d coloured my hair. When the line crested the top of my head and made for my ears, people I barely knew started asking if everything was “okay.” My mom would steal a worried glance at my hairline, forget what she was saying and shake her head. The real question on everyone’s minds came through loud and clear: “Why are you giving up?”

I went through many levels of self-loathing, but something about facing my hair demons made me determined to see it through. As I drained my hair of its colour, I was also slowly draining the power it held over me. A year later, the last of my dyed ends lay on the salon floor. When I looked in the mirror, I saw someone who looked and felt wholly like me.

Something else very odd happened: Strangers started stopping me on the street to tell me how much they loved my hair. Women, men, young, old, medium-old, all going out of their way to compliment a part of me I’d spent most of my life trying to hide. It took me a while to realize it wasn’t just my hair people were drawn to. I felt different. I was walking taller. When I stopped hiding my grey, other things started to fall into place. For the first time in years, I was happy in my own skin—and that, instead of my age, was what my hair was projecting into the world.

In her book, Ephron goes on to write: “Sometimes, I think that not having to worry about your hair anymore is the secret upside of death.” She’s right. But I highly recommend trying it out much, much earlier.