Own Your Individual Style: Reitmans Celebrates Canada's Diversity With Their New Collection 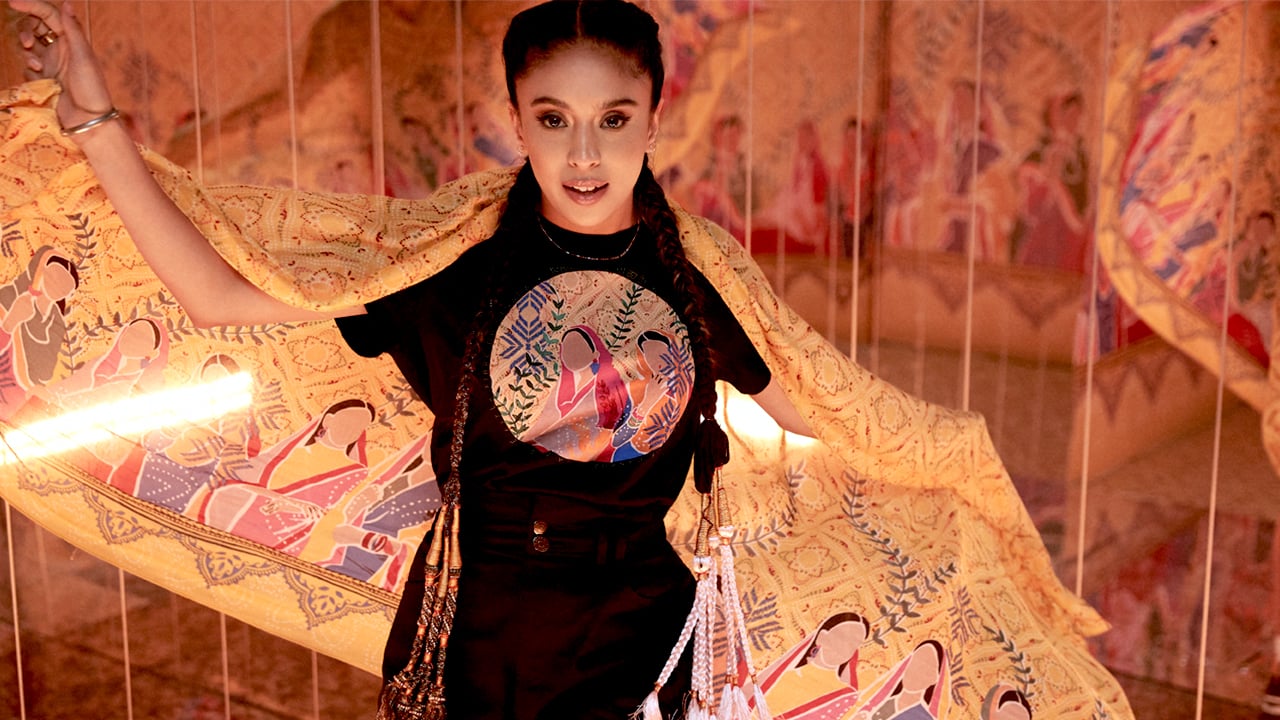 Every Canadian has their own unique story to share. From tales of immigration and struggle to success and bittersweet victories—diversity is the fabric of this nation. Each thread weaves together roots from far and wide. This diverse fabric is one that Reitmans is currently honouring with a new line that pays tribute to women who contribute to this rich culture. Seven women came together and helped design their own patterns for a line of T-shirts and scarves which reflect their cultural roots. Additionally, this collection also includes a tote bag which features the phrase “Diversity is the fabric of Canada” in the ambassadors’ mother tongues. For every item sold, the retailer has promised to give $2 to a charity of each woman’s choice (up to $10,000). From East to West, the stories below are a slice of life and a glimpse into Canada’s diverse cultural landscape. 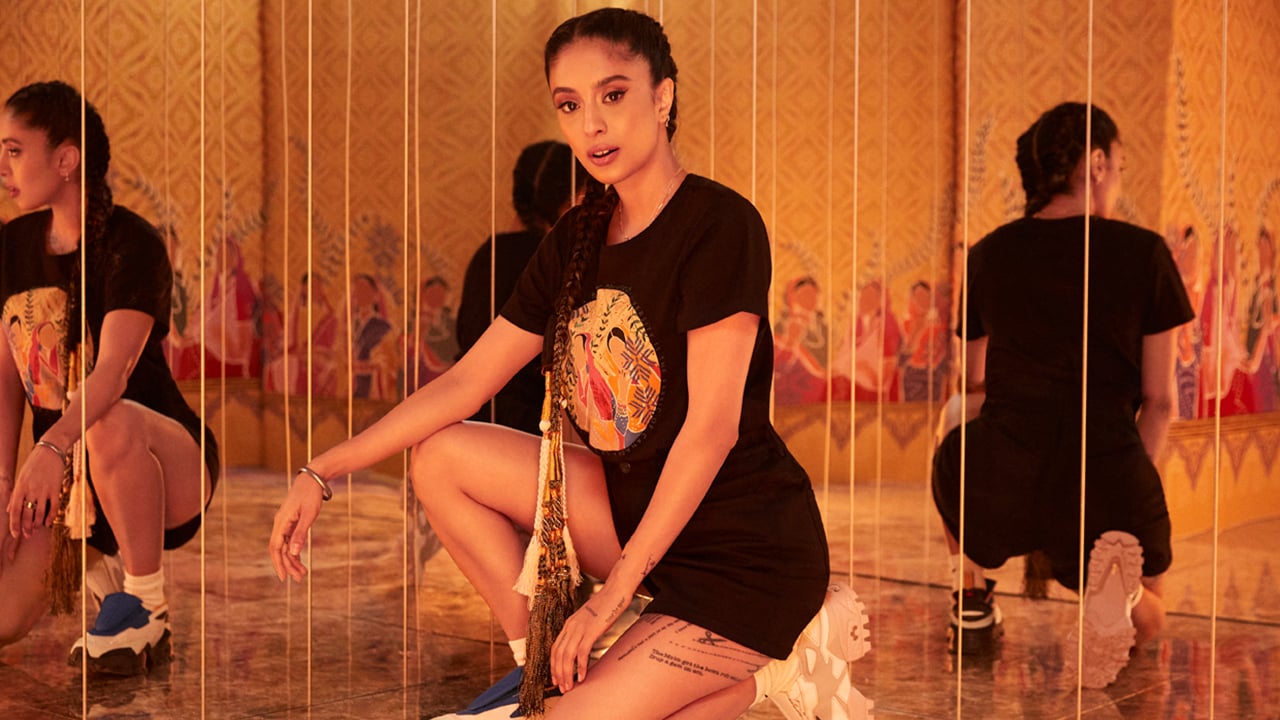 Teacher, stylist and fashion creative Sandy Kaur Gill grew up navigating the cultural norms of Canada’s western society and her parents’ home of Punjab, India—a well-known first-generational experience. Today, Kaur Gill is grateful for how communities have grown and evolved since her parents’ arrival.

By incorporating colours and patterns that reflect her Punjabi heritage, she hopes other Punjabi women are able to connect with it and feel represented.

“I don’t think my parents ever could have imagined the level of diversity we have now,” says Kaur Gill. “We have a lot of work to do still and I think this project is a great step in that direction.” 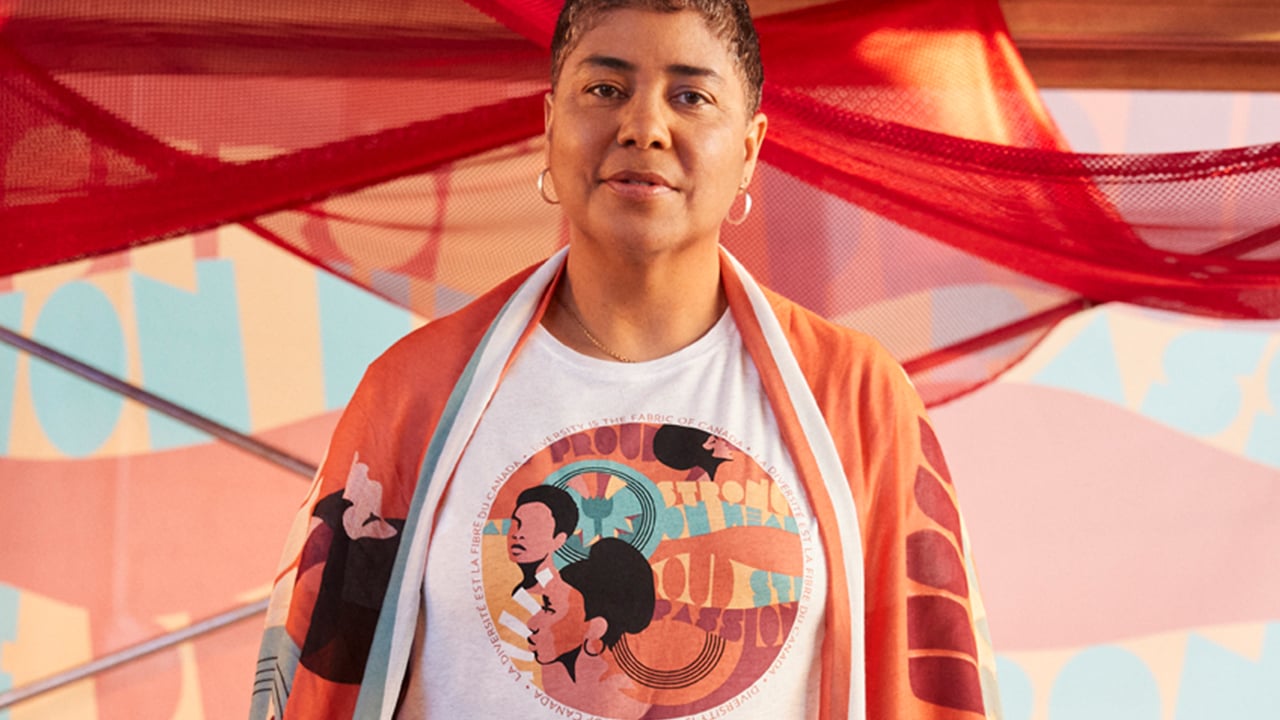 Angela James is a renowned former ice hockey player, and one of two first women inducted into the hockey hall of fame in 2010. She also remains to be the only Black player to captain Canada at a senior level.

“For many years, people have been excluded because of their race or sexual orientation and I’m not saying that Canada doesn’t have it, but I’ve been very fortunate that I didn’t have a lot of discrimination in my lifetime,” says Angela James. “My pattern is as diverse as I am. Inspired by Motown, which played a big role in my upbringing, it also pays homage to my Scottish heritage.”

As she wears that shirt, James suggests leading by example and refers to a next-generation doing the work “so people can feel the way they want to feel by being who they are.” 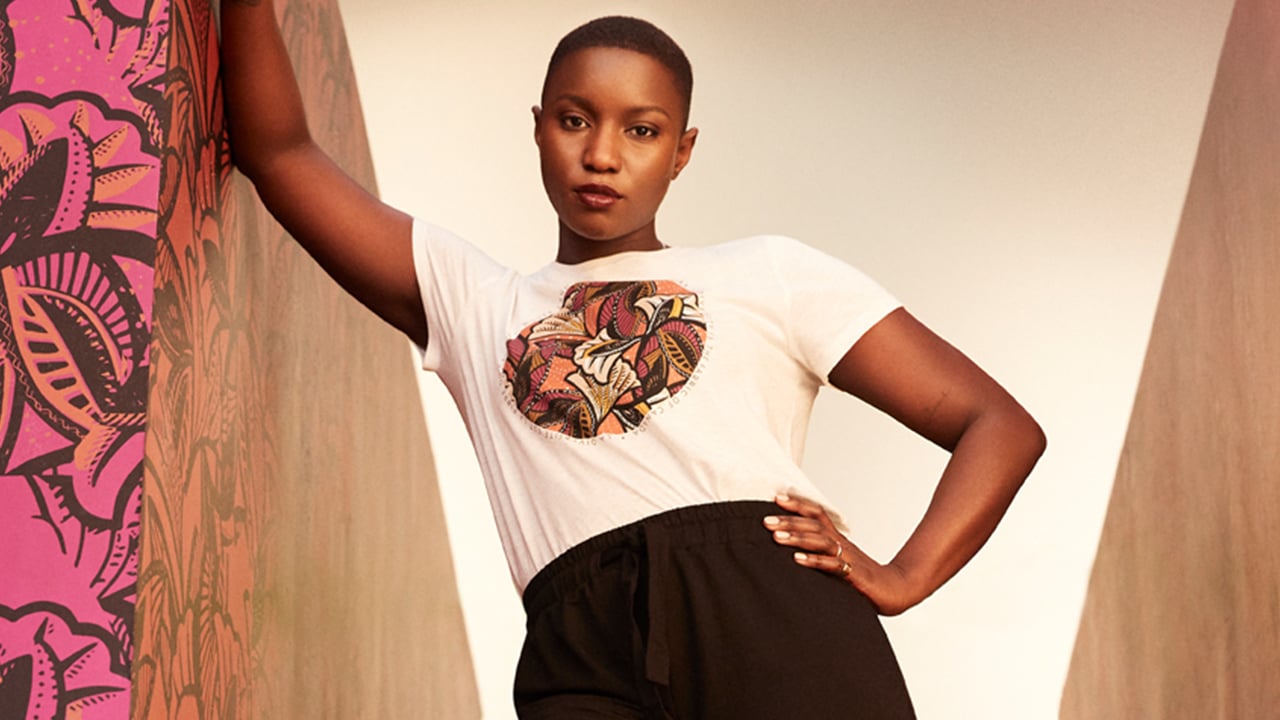 Montreal-based rap artist Sarahmée’s graphic shirt showcases wax prints as a nod to her West African country of origin and the strength of African women.

“The patterns and colours chosen represent a traditional African fabric. That palette and vivacity have always inspired my creativity,” she says. “I think that diversity is when everyone feels seen and represented in the arts, in culture, and in politics,” says the artist. “It’s important that everyone feels included and that everyone sees themselves because when you don’t see yourself, you feel alienated.” 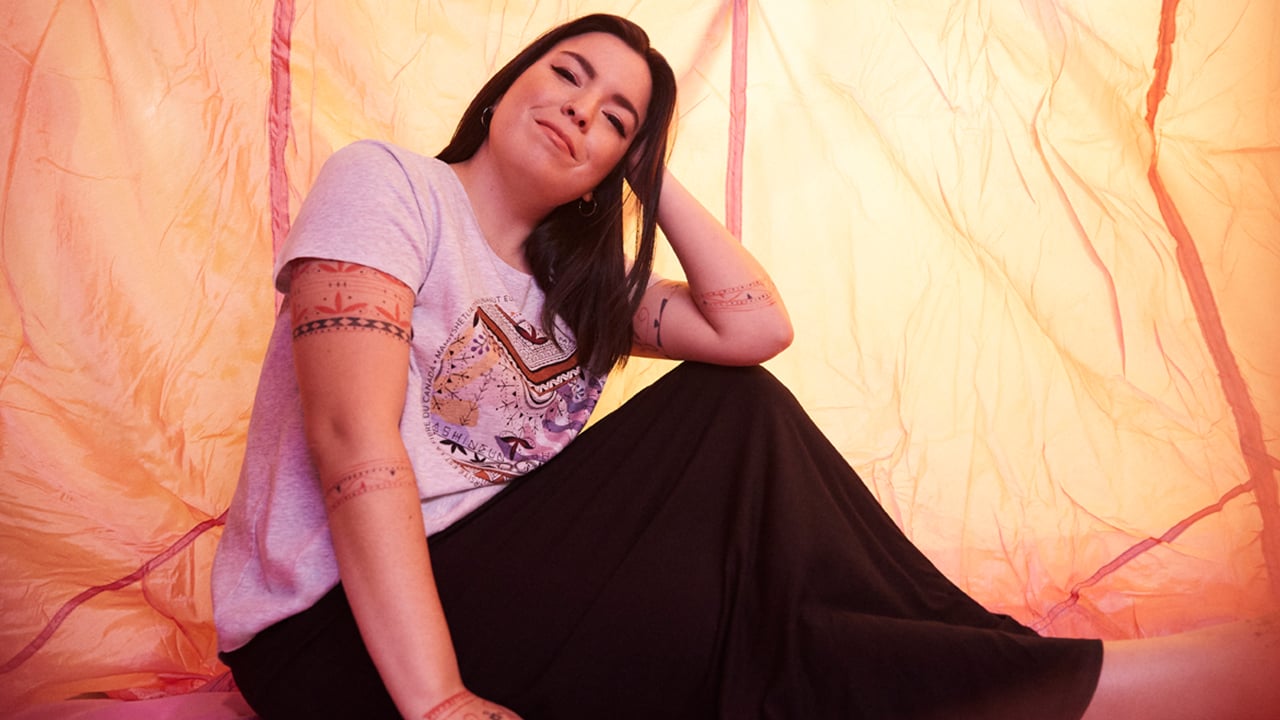 “Innu means ‘human being’ and therefore, for me to wear these colours, to wear these lines, is to carry all this memory and also to reiterate, every day, my desire to maintain my relationship with the territory from which I come from,” she says. ‘’This design is directly inspired by the symbols of my ancestors, with colours that attract the forces of nature. It’s a reflection of who I am—when I look at it, I see myself.’’ 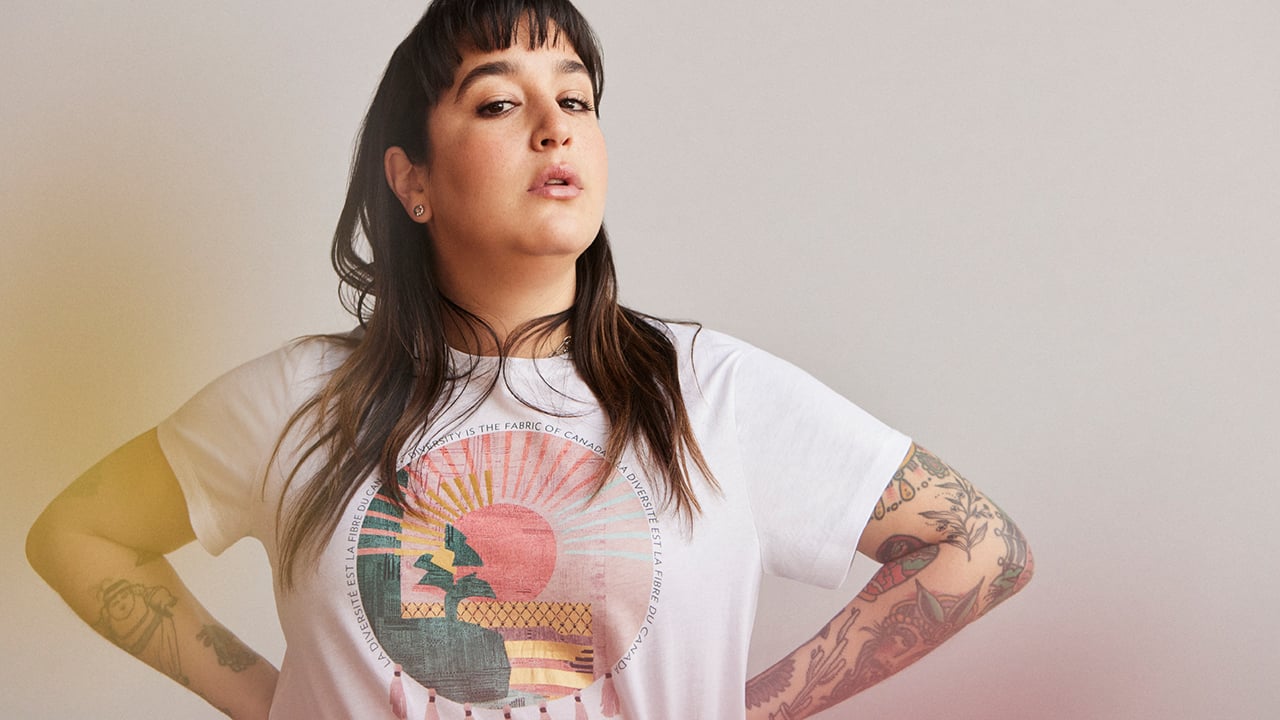 For Quebec-based humorist and comedian Mariana Mazza, diversity isn’t solely about where you come from, but about making the decision of who you want to be. With that in mind, she decided to include multiple parts of herself on her custom T-shirt: from Lebanon to Uruguay to Quebec.

“My colourful design represents the Latin American sun, shining on a cedar—a symbol of my mother’s native Lebanon—that watches over the earth, my Quebec.’’ 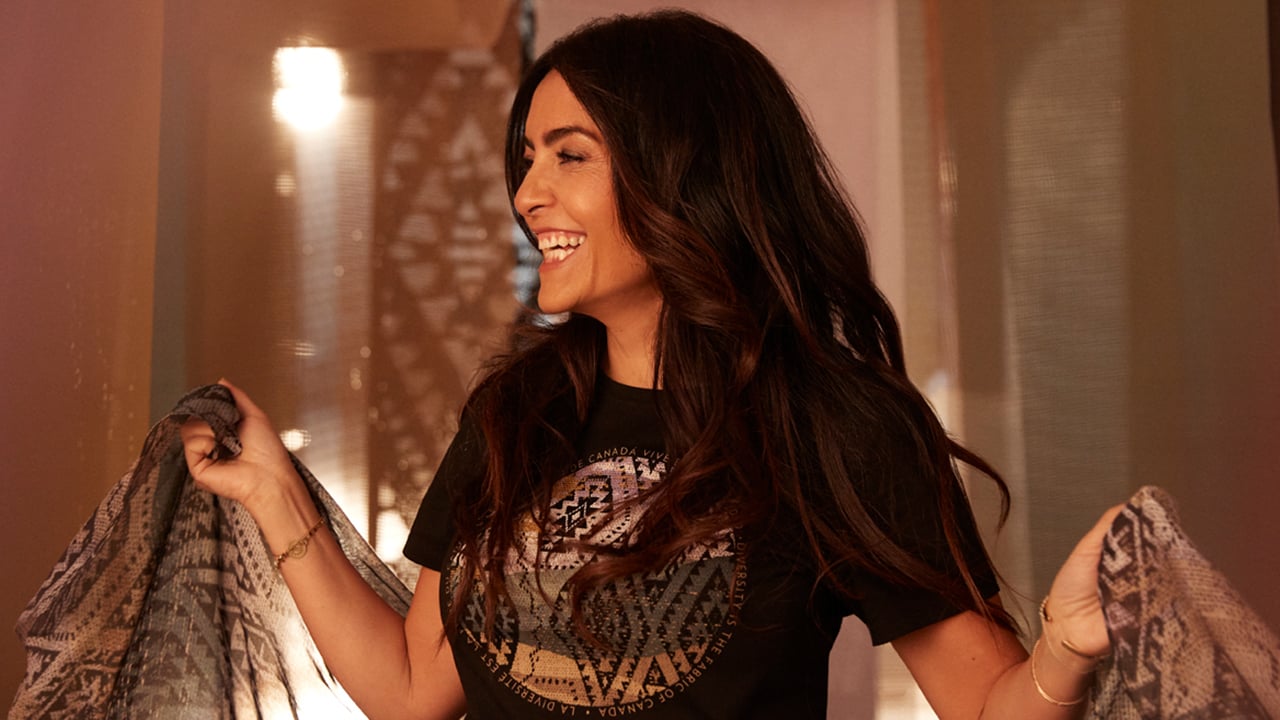 Alexandra Diaz is a Quebec-based television personality, food content creator and author who grew up in Sainte-Foy. Her T-shirt is a tribute to her mother, who used to call her “my little Mapuche,” a term of endearment and reference to the Indigenous people of Chile. With this inspiration, she decided to spotlight her culture and Mapuche women who are known for weaving fabrics.

“It’s all linked: my origins, where I was born, where I grew up, my mother, my love, my children—all the pillars of my life,” she says. “Carrying these two cultures within me is like winning the lottery. Quebec culture is something that I cherish, but my native culture runs just as much in my veins.” 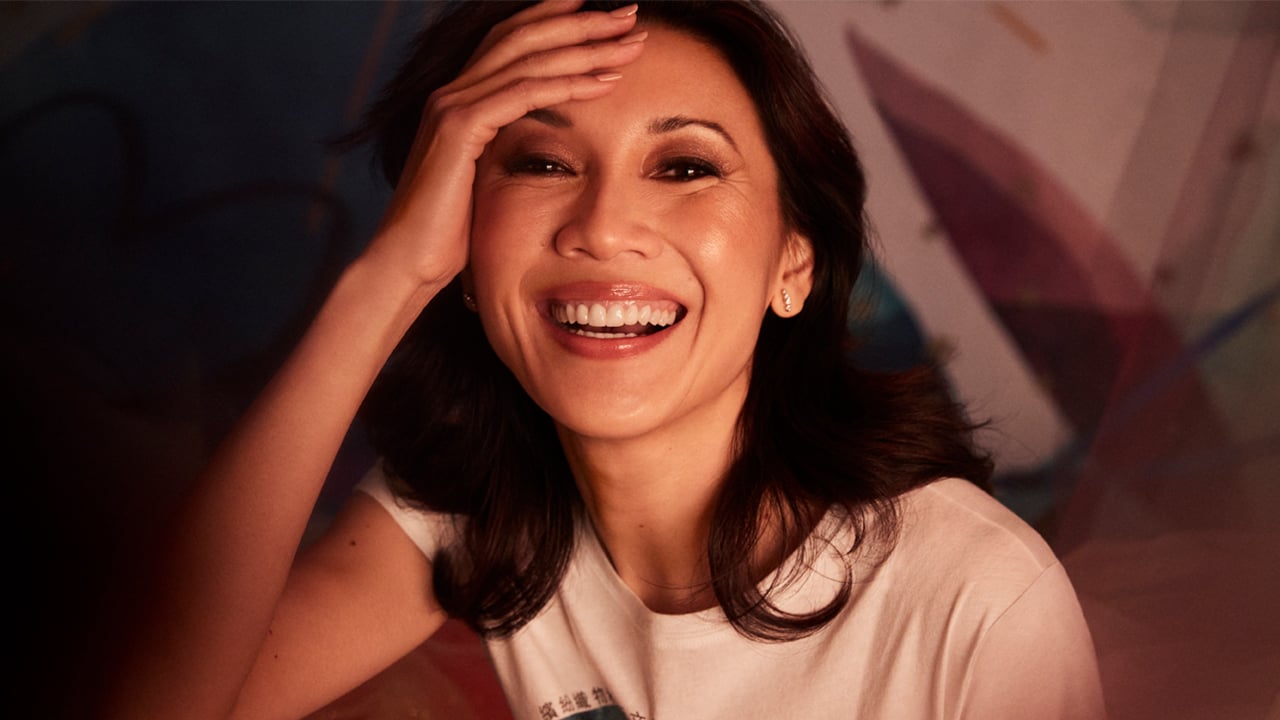 When Chan Hon Goh was eight, her family boarded an Air Canada flight from Beijing to their new home in Vancouver. Around 20 years later, she became the first principal dancer of Chinese heritage in the National Ballet of Canada, but the years in between were a struggle. “I felt like a fish out of water and wanted to fit in,” says Goh. She notes that she now sees the influence she had on Chinese ballerinas who followed in her footsteps and it’s important to continue this cultural momentum.

Goh decided to stay true to herself through her T-shirt design and capture symbols that have personal meaning for her: Water for survival, the moon to reflect the eve of my birth, the sun for its illuminating power, the stars for their allure in dance, and the heart for true love.

Get a closer look at all of the designs and browse through the pieces below! 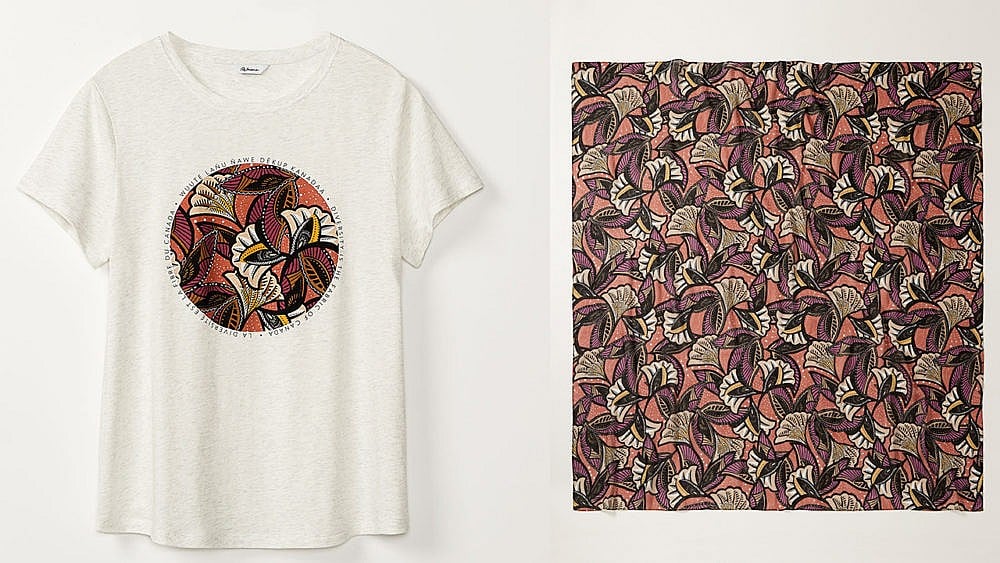 This unique, culture-rooted pattern features neutral and versatile tones that can easily be paired with everything, and dressed up or down. The T-Shirt is short-sleeved with a semi-adjusted round neck made of stretch jersey (60% modal and 40% cotton) and is available in sizes XXS to 3X. The scarf is made of 100% viscose.

Your purchase will support The Canadian Women’s Foundation.