Funding treatment, prevention and more—The Canadian Cancer Society CIBC Run for the Cure proves there is a reason to never stop running 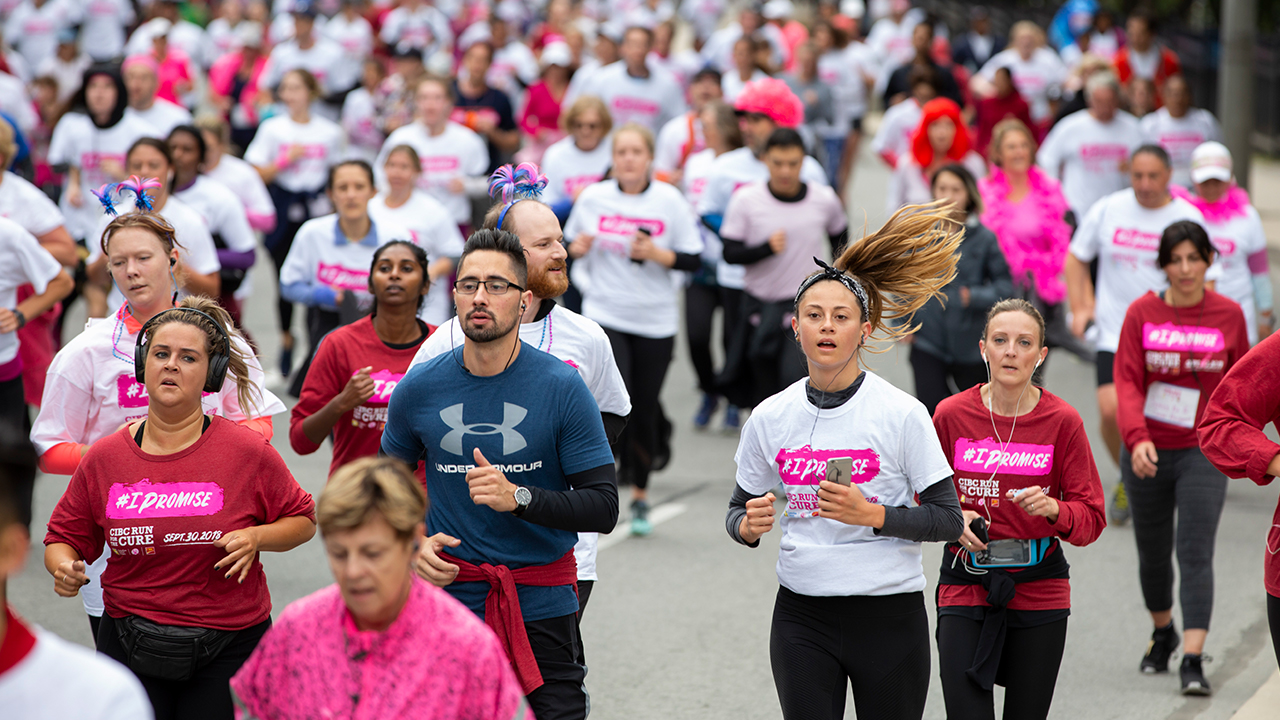 Every day, an estimated 75 Canadians will be diagnosed with breast cancer. It’s an alarming statistic and a stark reminder of cancer’s unforgiving reach. Despite this, a powerful strive for hope ignites communities across Canada as a force-for-life in the face of this illness. Annually, the CIBC Run for the Cure draws people from every corner of the country to unite and raise funds for the Canadian Cancer Society—the nation’s largest charitable funder of breast cancer research—and help make its ambition to cure breast cancer a reality. As we approach this year’s Run on October 3rd, reflecting on the event’s 30-year history is a marker of how far we’ve come in advancing research and awareness.

The movement began in 1992 when 1,500 volunteers gathered in Toronto’s High Park for what would become the Canadian Cancer Society CIBC Run for the Cure. Since that momentous day, more than $471 million has been raised for the breast cancer cause. With CIBC’s support, the Run has grown from 17 locations, when they joined as title partner in 1997, to 57 locations today. Over those 25 years, the Bank has helped to increase the Run’s profile by creating unique and engaging ways for individuals and local groups to get involved and give back – with its own team raising $56 million in the process. 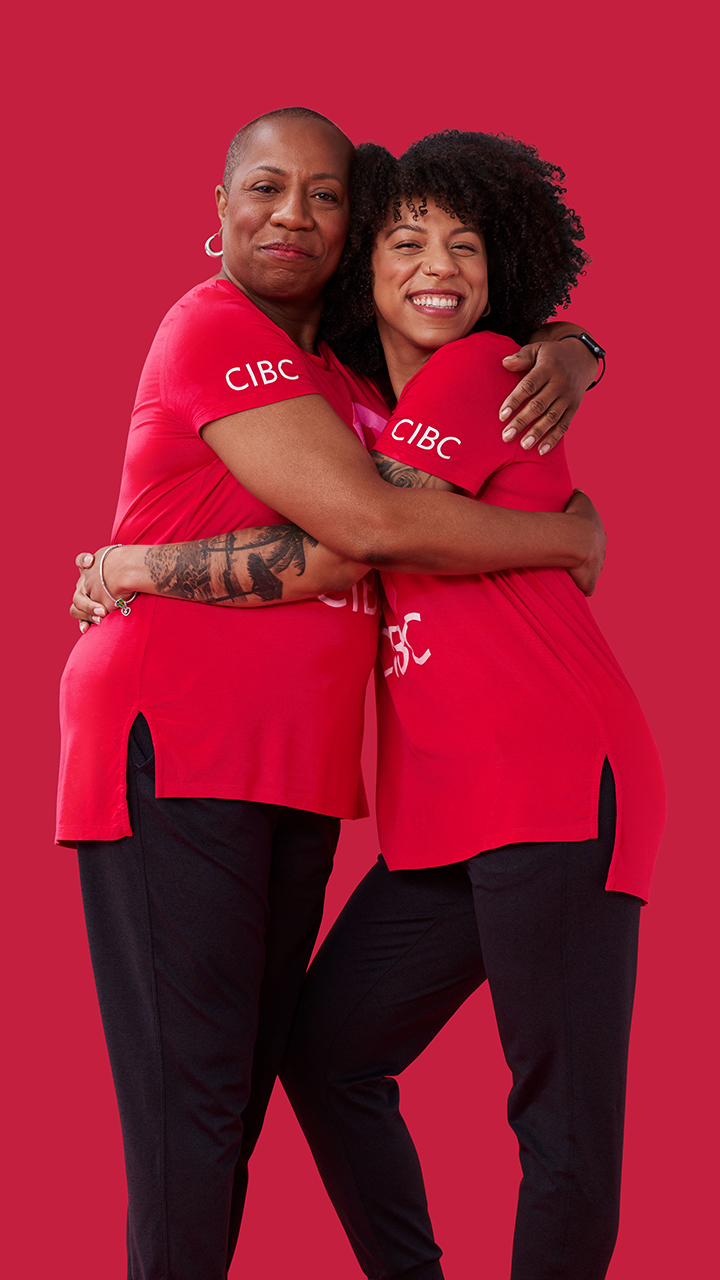 Now, thousands of Canadians rally to support the cause every year. Though hope is the mobilizing force for the event that has undeniably transformed the breast cancer space in Canada, breakthroughs in research, treatment, care and prevention stand as testaments to the value of working together for a common good.

With 1 in 8 women in Canada expected to be diagnosed with breast cancer in their lifetime, this disease impacts everyone. Whether you are a survivor, living with or at a high risk of a diagnosis, a caregiver, or have lost someone to this disease, it’s clear how serious breast cancer is, but also how treatable it can be thanks to efforts like the Run.

“With the help of our dedicated and visionary partner of 25 years, CIBC, we have mobilized communities to ignite and normalize conversations about breast cancer, supported people and governments to reduce breast cancer risk and deepened our investment in life-changing and life-saving research. And we’re not done yet,” says Andrea Seale, CEO, Canadian Cancer Society.

Funds raised through the Run have helped contribute to the discovery of BRCA1 and 2 genetic mutations which increase the risk of breast cancer and recurrence. This breakthrough has saved many lives. The Canadian Cancer Society has also used investments to support progressive, less-invasive surgeries, and has since delivered more efficient treatments contributing to the rise of personalized medicine. The results say it all: since its peak in 1986, the breast cancer death rate in women has been nearly cut in half due to strides in care and prevention.

In addition to these improvements in screening and treatment, transforming our mentality around breast cancer has proven to be equally significant. Until the 1990s, many women were not comfortable disclosing their diagnosis out of fear, but increased breast cancer awareness changed that. Today, a growing community of support exists for the purpose of empowering those fighting the disease — a community that CIBC and CCS celebrate in every step of the 5km run or 1 km walk. Future generations of women who will be diagnosed with breast cancer can know that they live in a world where survival is on their side. 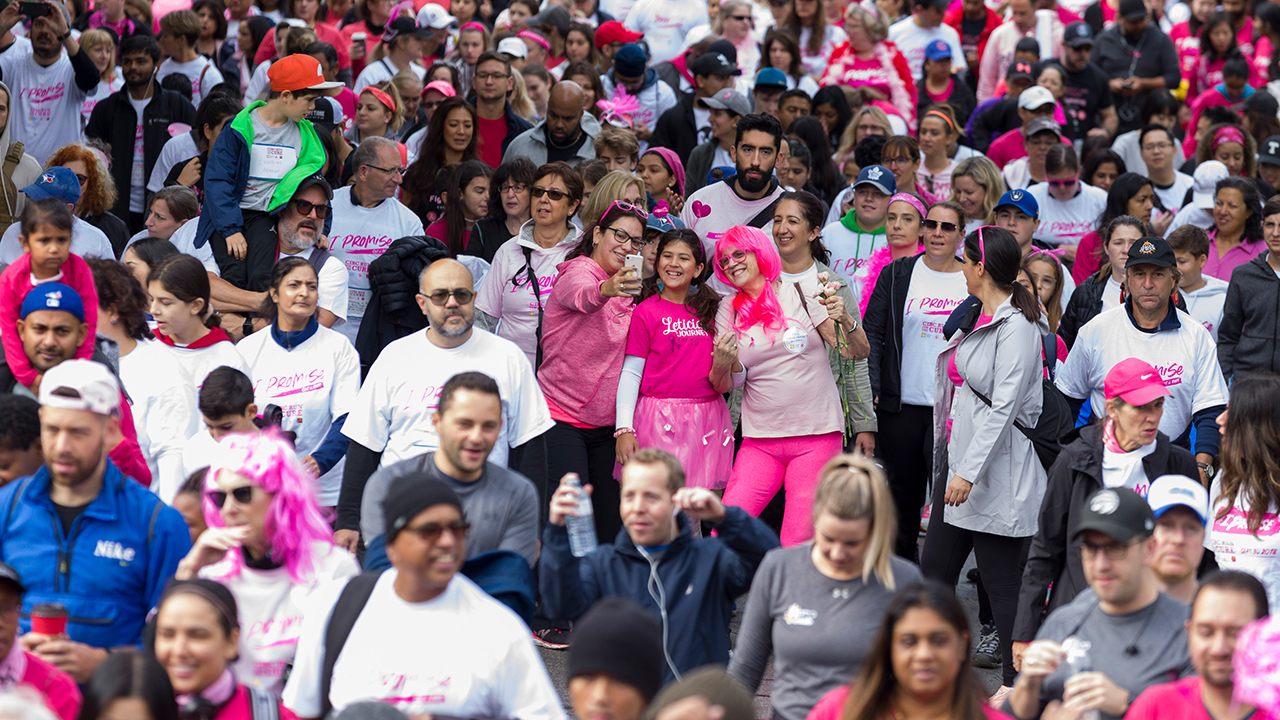 For 25 years, these two organizations have worked collaboratively to bring people together around a shared purpose, and in turn have enabled Canadians affected by breast cancer to receive life-changing support. Beyond the Run, the partnership has helped push forward initiatives like CCS’s online peer support community, CancerConnection.ca, allowing people to find community and connection and build wellness and resilience by sharing their experiences and building supportive relationships.

“The Run is a day where people from all walks of life come together to remember those we’ve lost and cheer on those who continue to fight breast cancer,” says Laura Dottori-Attanasio, Group Head of Personal and Business Banking, CIBC. Though the participants of the Run are brought together by a common cause, the event is embraced by crowds of love and support. Even when faced with the challenges presented by the pandemic, the willingness to come together virtually and never stop running is that much more profound. And the creativity to do so under difficult circumstances is a testament to the determination that has existed since the Run’s humble beginning. 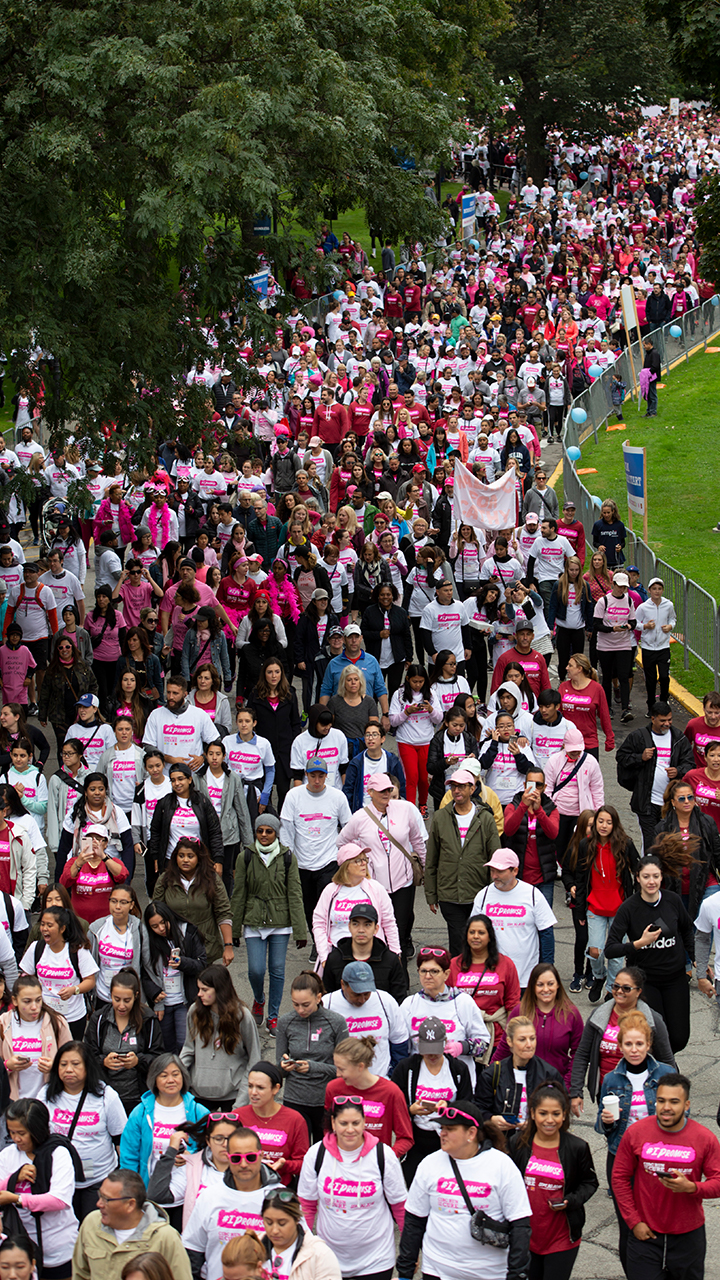 “While we look forward to a day where we can run side-by-side safely again, it’s inspiring to see the collective passion of Canadians dedicated to changing the future of breast cancer remains unwavered,” says Laura.

Last year, the Run was transformed into a one-of-a-kind experience with both physical and virtual components. An easy-to-use mobile app and website allowed participants to create and customize their own virtual runner, fundraise to unlock rewards, and track their activity within their own neighbourhoods. The first-ever virtual CIBC Run for the Cure drew 25,000 Canadians and raised over $9.5 million for breast cancer research and support systems. This year, another virtual experience is in the works with a refreshed app and avatar, a live-streamed opening ceremony featuring performances from iconic Canadian artists including Chantal Kreviazuk and Brett Kissel, and a celebration kit for fundraisers who will run or walk in their own neighbourhoods.

As the Run continues to grow its size, reach, and impact, the goal has remained the same: to create a future without breast cancer. Until then, this partnership, alongside the thousands of Canadians who participate in the Run each year, will never stop running. 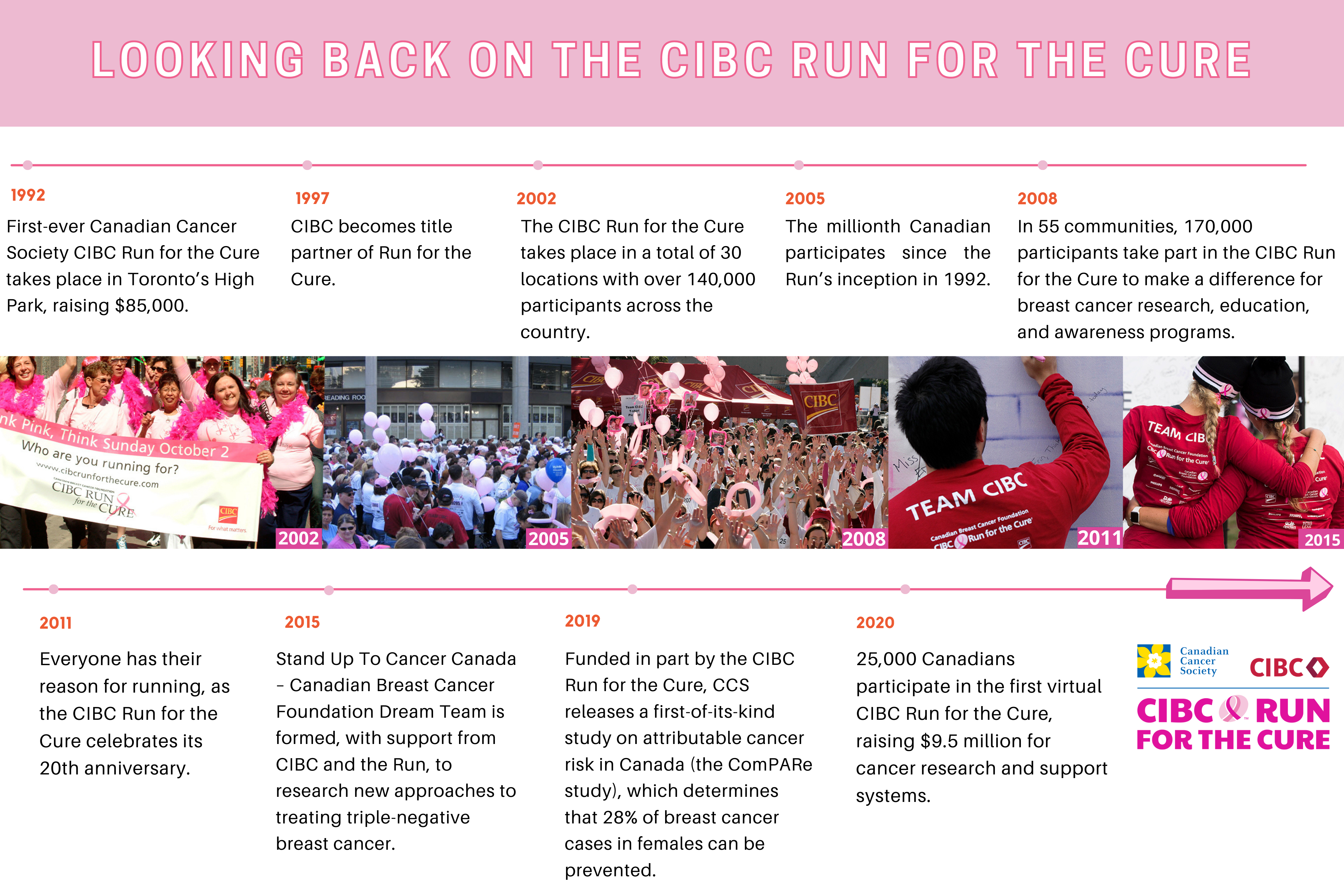 To learn more about the CIBC Run for the Cure on October 3rd, participate or donate, click here.