Whether you’re spending the day of love with your main squeeze, cuddling up with your kids or getting together with your gal pals, we’ve got a film for you. 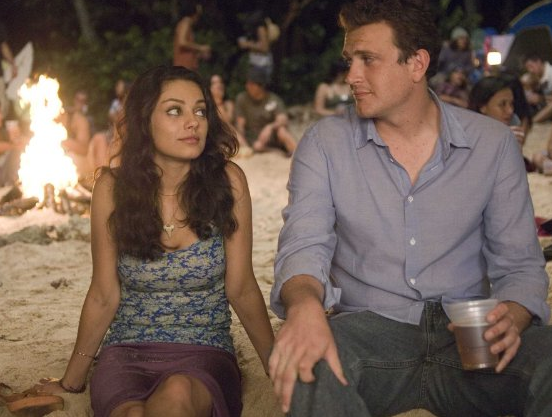 For cuddling with your sweetheart

Forgetting Sarah Marshall, 2008
The stars: Kristen Bell, Jason Segel, Mila Kunis
The plot: With an all-star comedic cast, this is one romcom that the man in your life won’t gripe about watching. From Russell Brand’s antics to Jason Segel’s Dracula puppet show, you’ll be LOL-ing (and “aww”-ing) throughout. The Hawaiian setting might also warm you up (if the cuddles don’t first!).
Love factor: 7
When Harry Met Sally, 1989
The stars: Billy Crystal, Meg Ryan
The plot: Perhaps the most adored romcom of all time (written by the queen of the genre, the late Nora Ehpron), When Harry Met Sally is Meg Ryan at her best (c’mon, the scene in the diner?!). Re-watch this hilarious flick that raises the debated question: Is it possible for a man and a woman to just be friends?
Love factor: 8

Casablanca, 1942
The stars: Humphrey Bogart, Ingrid Bergman
The plot: Cozy up with a classic! This World War II love saga tops every list as one of the most romantic films of all time. Set in a piano bar in the Moroccan coastal city of Casablanca, the film is about two former lovers who are reunited and reminisce about their affair in Paris, while piano man Sam plays their song, “As Time Goes By.”
Love factor: 10
FILED UNDER: movies Valentine’s Day