From flourishing farmers' markets to celebrity chefs to organic just-about-anything, we've never been more obsessed with what we eat. So why does so much perfectly good food end up in the trash? 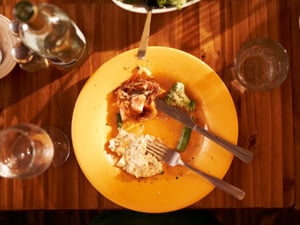 When you are raised by someone who once survived on potato peelings and coffee grounds, you develop a pretty healthy respect for food. My father, who lived in Poland’s notorious Lódz ghetto from 1942 to 1944, loathes the idea of letting any scrap go to waste. In my parents’ home, Friday’s roast became Saturday’s sandwiches and, if we didn’t polish it off, Sunday’s meat-and-BBQ-sauce mélange. Fresh bread went straight into the freezer and was defrosted by the slice to stretch the loaf’s life from a few days to as many weeks as it took to eat it all up.

Even before the economy tanked and my monthly grocery tab began to feel like a second mortgage, I was the type who ran a spatula around the inside of the mayo jar before declaring it fit for recycling. But I admit that my family of five still wastes plenty of food. I buy too much, bring home obscure veggies nobody wants to eat and make bad predictions about how many nights we’ll be home for dinner.

Mine is not the only household tossing out wilted lettuce and rancid cottage cheese every week. A new study from Statistics Canada found that in 2007 nearly 40 percent of our food supply was wasted by households, restaurants and supermarkets. An even more comprehensive 2008 British study yielded a similar figure: About a third of all groceries purchased, amounting to nearly seven million tonnes of food, is thrown out annually in the U.K. Those findings made headline news. (“Waste not want not, Gordon Brown tells families” and “Britain’s colossal food waste is stoking climate change” are only two of dozens of examples.) As a result of the study, a government-backed food-waste-awareness and-prevention campaign called Love Food, Hate Waste was launched.

Here in Canada, there’s astoundingly little ink devoted to our food-waste crisis, but that doesn’t mean nobody is paying attention. Take Wayne Roberts, who manages the Toronto Food Policy Council at Toronto Public Health. Author of The No-Nonsense Guide to World Food, Roberts is keenly interested in the issue from a global perspective. “A lot of the food that is produced worldwide, at great cost in terms of energy and labour, goes to waste,” Roberts says.

He’s referring not only to what we throw out at home, but to other forms of waste we don’t often think about: for starters, the bushels of potatoes abandoned in the ground or peaches left to rot on the tree when farmers can’t get as much for their crops as it would cost to harvest them. At sea, there’s the problem of bycatch – all of the edible fish and seafood that gets caught in industrial fisheries’ nets and chucked back (dead or dying) because it isn’t the salmon or tuna they were trawling for. Then there are the parts of the animal that we don’t buy and rarely eat, and – one of Roberts’s biggest peeves – the produce that is too big, too small, misshapen or slightly bruised and so never sold, even though it’s perfectly good to eat. As you might expect, grading systems keep these cosmetically challenged fruits and veggies out of our grocery stores, but the surprising bit is that farmers do, too. “The secret crisis of the food system is overproduction,” Roberts explains. We quite simply grow more than we can eat. But who can blame the farmers? They have a tough enough time making a living without flooding the marketplace with shabby-looking produce that will drag down the price of their goods, says Roberts. (As it stands, the profitability of fruit and vegetables is in free fall, says Art Smith, CEO of the Ontario Fruit and Vegetable Growers’ Association, based in Guelph, Ont.)

Add to all of this the food we waste at home. Even as we’re growing more food conscious, combing farmers’ markets and grocery stores for local and organic products (sales of the latter have surpassed more than $1 billion annually in this country), we’re careless when it comes to using it all up. Statistics Canada reports that 60 percent of the country’s total organic waste is residential – a waste of food and, increasingly, money. From May 2007 to May 2009, for instance, the average price of rice in Canada rose by 29 percent, cereal by 17 percent and flour by a whopping 35 percent. (The average price of a loaf of bread rose by 48 cents during the same period.)

Food waste has an impact on the environment, too. When organic material (which includes kitchen scraps as well as leaf and yard waste) ends up in the garbage, it goes into landfill, where it produces methane, a greenhouse gas. “Methane is 21 times more harmful than carbon dioxide, which is the gas given off during composting,” says Paul van der Werf, a waste-management expert and president of 2cg, a waste-consulting company based in London, Ont. Our country’s landfills are responsible for a quarter of the man-made methane that we release into the atmosphere.

It’s true that Canadians are getting better at diverting organic waste, with curbside programs in cities like Edmonton, Kingston, Toronto, Moncton and Charlottetown putting food waste to better use. Edmonton, for instance, sells the compost it generates from household organic waste to local farms. But as van der Werf points out, not all communities have access to curbside compost pickup. “In places where there is no program – most of Alberta, for example – almost all food waste is going to landfill.”

Then there’s all the food that gets thrown out on a commercial level, by restaurants, food suppliers and grocery stores. Mark Cutrara, the chef-owner of Cowbell restaurant in Toronto, says that small restaurants like his can make use of municipal green- bin programs, but larger venues are on their own. Cost becomes a factor. “It’s up to the grocery stores and restaurant owners to decide where to put their waste,” van der Werf confirms, “and they will look for the cheapest option.”

Loblaw Companies, which operates one of Canada’s largest grocery store chains, started tackling the issue of food waste in 2005. According to Mark Schembri, vice-president of store maintenance, food waste – primarily vegetable trimmings and bakery items such as expired croissants – accounts for one-quarter of the company’s total waste. Sixty percent of that waste is diverted (recycled or repurposed) while the rest ends up in the dump. By the end of this year, the company hopes to divert even more, thanks to a series of initiatives – such as sending organic waste to farms to use as feed and shipping fryer grease to a facility that processes it into biodiesel – that are designed to put organic waste in more constructive places. The company says it doesn’t toss any edible food – that is, food that meets its quality standards and hasn’t expired. Products that are edible but not sellable, for reasons such as damaged packaging, are donated to food banks.

They sure need it. Ironically, as we are throwing out more and more food, the number of hungry people in our country is rising. In its annual survey, Food Banks Canada reported that more than 700,000 people – 37 percent of them children – received groceries from a food bank in an average month in 2008. This year’s numbers are already about 20 percent higher.

Reversing such a massive, widespread problem isn’t easy, and compared with Britain – whose Love Food, Hate Waste campaign has already helped prevent more than 137,000 tonnes of food from being tossed – Canada is far less pro­active. “Not a dime of government money goes into preventing food waste,” Roberts says. For starters, remember the cosmetically challenged produce? Roberts would like to see the government buy up all those ugly carrots and lopsided apples and use them to help create wholesome meals for children in need. (Breakfast for Learning, a national child-nutrition-advocacy group, reports that 31 percent of school kids don’t eat breakfast on a daily basis.) Some organizations with food-recovery programs are already attempting to bridge the gap between surplus and shortage. Non-profits such as Vancouver’s Quest Food Exchange, Winnipeg Harvest, Toronto’s Second Harvest and Moisson Québec pick up unwanted food from grocery stores and wholesalers and redistribute it to local shelters and soup kitchens. In total, these programs divert some 20 million pounds of food – which would otherwise go to waste – annually. That’s no small feat, but ultimately Roberts would like to see our food production and distribution rebuilt from the ground up: “Time would be better spent changing the system rather than recovering food from a wasteful system.”

At home, we can start by looking in our own fridges.

A few simple strategies: Plan your meals before you go to the store so you’re not buying random items you won’t use, and bring home less each time you shop. You’re more likely to use up produce if it’s convenient, so clean and cut up vegetables before you put them in the fridge so they’re ready when you need them. Cutrara, whose restaurant buys whole animals and uses everything from nose to tail – popular menu items include marrow bones and pork-hock and trotter soup – is philosophical about it. “Once we start treating food as the precious thing the rest of the world thinks it is,” he says, “there won’t be very much waste at all.”

I know my dad would agree.

1. Know what’s in your fridge and cupboards before you shop so you don’t double up on ingredients you already have. Then write down the expiry dates of perishables and post them on the refrigerator so they’re in your face every time you open the door.

2. Use a thermometer to check the temperature of your refrigerator. Health Canada advises setting the thermostat at or below 4 C.

3. Don’t freeze supermarket meat, fish or poultry in its original packaging. “The plastic film used by most supermarkets allows oxygen to reach the product, which can cause freezer burn,” says Abe Van Melle, who trains future butchers at Calgary’s Southern Alberta Institute of Technology. Instead, unwrap the meat, rewrap in plastic wrap and then put it in a zip-lock bag and press down to get rid of extra air – this will keep fish and chicken fresh in your deep freeze for up to six months and beef and pork for up to a year.

5. Use stale bread for French toast or bread pudding, suggests Anneli Rufus, co-author of The Scavengers’ Manifesto. (You can also pulse it in a food processor for bread crumbs, or cube, toss in olive oil and toast in a medium-heat oven for croutons.)

6. Toss mushy tomatoes with olive oil and garlic, then roast and serve in pasta, in salads or as a side dish.

7. When Sandi Richard, host of Food Network’s Fixing Dinner, needs to clean out the fridge, she makes a strata: “Spray a casserole dish with oil. Toss in leftover meat, veggies, cheese, three cups of cubed bread and any herbs you like. Cover with four beaten eggs mixed with one cup of milk, then bake for 45 minutes.”

8. Have a basket of overripe peaches or nectarines on your hands? Rufus freezes halved, pitted stone fruit on cutting boards before transferring them to plastic containers. She also freezes lemon juice to use up later in salad dressings and desserts.

9. Jennifer McLagan drains and freezes liquefied animal fat from cooked meat for future use. “Sautéing chicken in poultry fat, for example, adds another level of flavour,” says McLagan, author of Fat: An Appreciation of a Misunderstood Ingredient, with Recipes. She also drizzles reheated bacon fat over steamed veggies.

10. Rethink your serving sizes. Nobody benefits from enormous portions, especially when they go straight into the waste bin.