Craving something warm with plenty of greens? Looking for a salad that's hearty and perfect as a light meal? Want something that's easy to make, spectacular to eat, and will wow your dinner guests? Then the Wilted spinach salad with chipotle pork is just what you need. 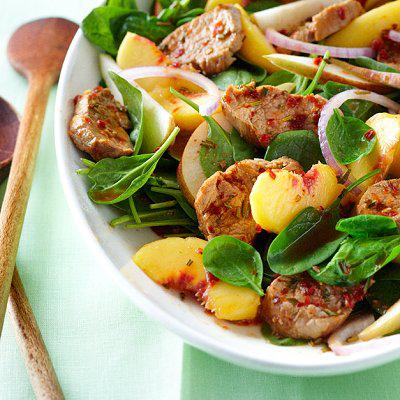 Craving something warm with plenty of greens? Looking for a salad that’s hearty and perfect as a light meal? Want something that’s easy to make, spectacular to eat, and will wow your dinner guests? Then the Wilted spinach salad with chipotle pork is just what you need. We ate it last night, craving a light meal after having had too much birthday cake lately to celebrate our toddler turning two.

I was a little slow cutting the meat, wondering why it seemed like it was taking forever. Then I clued in that I was using a serrated knife (our favourite that we use for nearly everything) instead of a large, curved-edge chef’s knife. Once I switched cutting utensils, the act of cutting the pork into thin, round slices was more speedy and less arduous, which I was grateful for because I was tired from having stayed up late the night before. We had decided to watch a movie in its entirety rather than to spread it out over two or three nights like we usually do these days. Oh well, it wasn’t the first time that I exercised poor judgment.

In any case, once the meat was sliced and browned, cooking it was fast. The rest of the ingredients were easy to prepare: the spinach, onions and pear slices waited patiently in a bowl while I worked on the sauce. I loved the smell of the orange juice, rosemary and cumin bubbling away on the stovetop. I went light on the chipotle chili, out of respect for the more sensitive palates of my 19-year-old sister-in-law/housemate and our toddler who, since turning two, seems determined to eat only crackers and dip for dinner.

I must say that this salad tastes even better than it looks. If you want to add more spice to it, just increase the amount of minced chipotle chilis that you put in. But the 1 teaspoon that I had put into the sauce added such a lovely subtle flavour that, contrary to my expectations, did not take away from the complementary flavours of the sharp onion and the sweet pear slices.

The dressing was so good that I would venture to use it simply as a sauce for pork chops. I’m willing to bet this warm salad would be just as tasty as a cold summer salad. I look forward to making it again to find out. 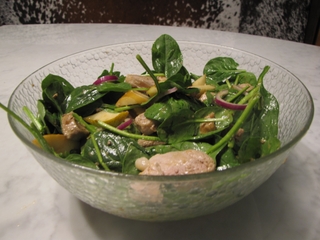