Pudding is so retro and brings back great dessert memories from my childhood, but this version gets bonus points for extra chocolate and a tiny hit of liqueur 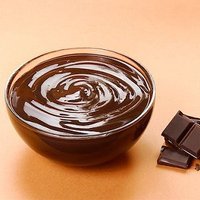 This is a recipe I’d been looking forward to making for a while: Velvety chocolate pudding (from Chatelaine’s Holiday 100+ best recipes). Pudding is so retro and brings back great dessert memories from my childhood, but this version gets bonus points for extra chocolate and a tiny hit of liqueur. Now if I was looking forward to it, you can only imagine mini sous chef’s anticipation. Chocolate in any form pretty much rocks her three-year-old world right now.

I made one big batch rather than individual servings, and opted for the higher fat 3.25% milk. I was also happy to finally have a reason to polish off my stash of semi-sweet chocolate squares that have been sitting in my pantry for way too long.

Once the ingredients were whisked together to banish lumps, I cooked the mixture over medium heat and waited for it to thicken. Now I wasn’t totally sure what “thickens” means…like how thick, exactly? So I left it on and stirred continuously as per the directions until it looked pudding-like. Which, as it turned out, was almost too long, as it had started to stick to the bottom of the pot. After I took it off the heat, I added the chopped chocolate and vanilla and stirred the warm pudding to dissolve the chocolate. At which point I realized I had only one minute until a conference call (the joys of working at home!), so I stirred furiously for that last 30 seconds, poured it all into a glass dish and stuck it in the fridge.

Because I rushed it, the chocolate pieces didn’t fully melt, but you know what? It was actually really good, with a little chocolate crunch in every bite. Plus, I can imagine how nice it would have looked chilled in individual white ramekins…with whipped cream on top. But ours was family style pudding, which some of us (not naming names) may have eaten straight out of the glass dish.

And mini sous chef was in (chocolate) heaven. Which was great until bedtime, when the chocolate joy coursing through her tiny veins made her run in circles. Note to self: no chocolate pudding after dinner. It’s going to have to be more of a post-breakfast treat in this house…come on, don’t tell me you’ve never had chocolate for breakfast.

FILED UNDER: Cooking with Karma Desserts