Yes, You Can Make A Rich And Creamy Milkshake Without Any Dairy (Seriously)

Just because she eats plant-based, that doesn’t mean hot for food blog’s Lauren Toyota eschews comfort food. In fact, she couldn’t live without it.

For Chatelaine’s new video series, Vegan It! with Lauren Toyota, the former MuchMusic VJ and current YouTube star demonstrates how to create vegan versions of everyone’s favourite comfort classics — like BLTs and caesar salad — without elaborate recipes or compromising on taste. Find more of Lauren’s awesome recipes on her blog, her YouTube channel and her upcoming cookbook, Vegan Comfort Classics.

In this episode: Lauren whirls up a classic vanilla milkshake — topped with whipped cream and a cherry —without a single drop of dairy.

Making it thick: Creating this creamy, decadent shake is a breeze. You don’t need to worry about soaking cashews or preparing anything in advance for this recipe — everything you need is easily found at the supermarket. “There’s always a section that has vegan products next to the regular stuff,” she says. For this milkshake, she uses Coconut Bliss‘s coconut-based ice cream. (If Coconut Bliss isn’t available, any non-dairy ice cream will do, just scan your frozen section ’til you spot the dairy-free zone.) 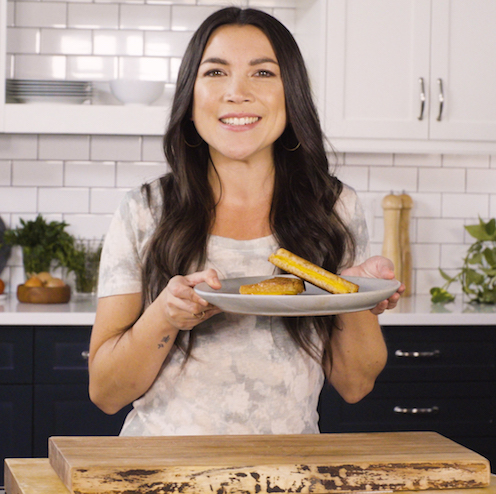 Making it creamy: Milk is obviously a key ingredient in a shake. Lauren says any non-dairy soy or nut milk will do, but her go-to is unsweetened almond milk.

Flavouring it: For a mint chocolate chip version, toss fresh mint leaves and vegan chocolate chips into your blender along with the milk and ice cream. Craving chocolate? Add cocoa powder to the mix.

Extras: To make your milkshake look straight out of Pop’s Chock’lit Shoppe, top it with vegan whipped cream and a cherry. Most grocery stores sell Gay Lea’s canned coconut whipped cream — it looks just like the real thing!