One of my favourite comfort foods is chicken pot pie, although it’s more pub fare than something I’d cook up in my own kitchen. It’s the pastry, once again. Sigh, the pastry. But then I saw Chatelaine has a solution for my lazy pastry. 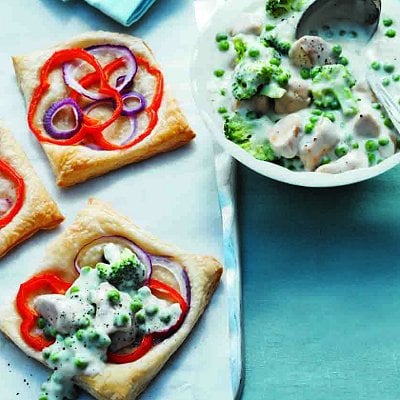 With the shorter days and cooling air, we have officially entered comfort food season. There’s nothing like a fragrant pot of chili or a gooey pan of mac & cheese to make winter’s chill disappear. Besides, we spend months under bulky sweaters and chasing kids in our snow pants, so a few extra indulgences are okay.

One of my favourite comfort foods is chicken pot pie, although it’s more pub fare than something I’d cook up in my own kitchen. It’s the pastry, once again. Sigh, the pastry. But then I saw Chatelaine has a solution for my lazy pastry ways: Upside-down chicken pot pies from the Holiday 100+ best recipes book. Inverted chicken pot pie…brilliant.

As I scanned the instructions I saw the most complicated part of the meal was cutting and cooking the chicken, which I knocked off in under five minutes. Even with my mini sous chef underfoot, her pint-sized whisk at the ready (which, by the way, is very cute but the opposite of helpful). The signature white sauce was made simply with melted butter, flour, and milk, and the peas and broccoli were added frozen. I boiled the white sauce gently, then let the veggies cook for about three minutes longer. But the sauce could have used a few more minutes on the stove, as the peas were slightly too al dente for our tastes (I used frozen organic peas, which tend to be larger and may have been the difference).

I’m happy to report the pastry holders were the easiest part of the meal. A package of puff pastry, thawed and unrolled, and then cut into four squares. Top each one with red pepper and red onion rings, bake for about 20 minutes, and you’re ready to eat.

The peas were a deal breaker for the mini sous chef, so I would leave those out next time or switch them up with a veggie she prefers. But the pot pies were given two thumbs up from the hungry husband, and I had to stop myself at just one. Which brings me to my last point: You will want seconds, so wear comfy pants and stock your freezer with extra puff pastry.

Click here for the recipe: Upside down chicken pot pies