In the Chatelaine Kitchen we like to be ahead of the curve — creating delicious trends, not just following them. Here’s what we’re looking forward to cooking and eating in 2013. 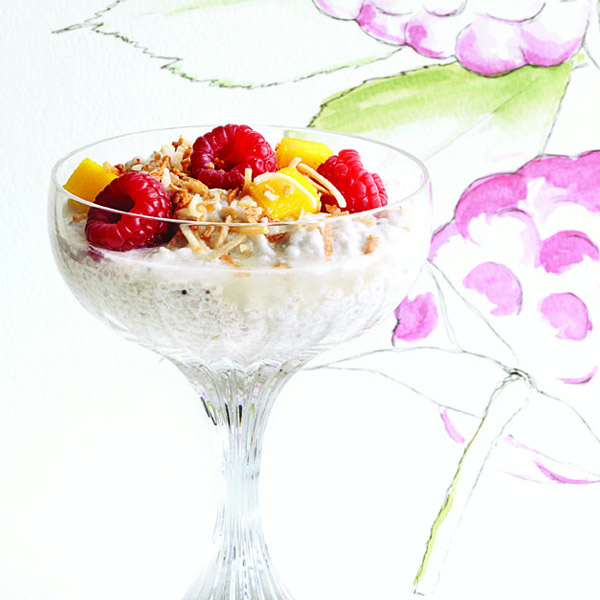 1. Ch-Ch-Ch-Chia: From soups to sauces and desserts, this mainstay Mexican seed, packed with Omega-3 fatty acids, protein and fibre, is like the new flax seed. Sprinkle them over salads or spin them in your morning smoothie or cereal for a daily superfood boost.
Chia and coconut pudding

2. Street eats move indoors: We line up for it, Instagram it, scarf it down, then instantly want more. With food truck culture in full swing and many trucks now setting up bricks and mortar shops, everything from tacos to spicy chicken wings are on the menu. We’re taking inspiration from these street cooks and their cookbooks and are starting to dish out street food in our very own kitchens.
Guide to Ontario food trucks: 27 best street-eats

3. Hotel dining: With Daniel Boulud and David Chang opening up multiple restaurants in new five-star Toronto hotel digs (Boulud also opened at the Ritz in Montreal this summer), Jean-Georges already at the Shangri-La in Vancouver and a delicious Scott Conant Scarpetta in Toronto’s Thompson — though hotel dining was thought to be a thing of the past, suddenly it’s becoming the future of dining.
Chic cosmo cocktail and toasted nuts recipe

4. Homemade dairy: We’re already making our own ricotta, mozzarella and paneer cheeses, homespun yoghourt and freshly made butter. Next up: We’re getting a little more complicated and making soft-rind aged cheeses, reading up on technique, building mini cheese caves and investing in cheese inoculations. In other words, a fun hobby is about to become a full-fledged obsession.
Easy homemade ricotta

5. Ramen: We liked it when sushi became mainstream; we loved it when izakayas entered the Canadian market. Japanese flavours continue to infuse our lives, now with the explosion of ramen noodle bars. A number of new ramen joints opened up in Canada (Toronto and Vancouver) over the past few years, and with the opening of the trendsetting Momofuku in Toronto, it’s about to get huge.
Sesame ramen with bacon and egg

6. 100% Sustainable: Just like local fruit and veg have become the norm at many restaurants, using only sustainable fish and seafood will take a giant leap this year. It has to. With the world’s oceans on the verge of collapse, we won’t have a choice for much longer. 100% sustainable fish shops and restaurants will become the new norm and supermarkets will soon sell only 100% sustainable (Loblaw’s has promised this by the end of 2013.) This is good news for everyone: After all, there are a bunch of tasty critters out there you didn’t even know you were missing.
Five reasons you should eat sustainable seafood

7. Designer dough: The whoopie pie couldn’t overtake the cupcake frenzy, but can the doughnut beat the odds? Move over Tim Horton’s; Boston Cream Pie is no longer the fanciest variety of deep-fried dough. With designer doughnut shops popping up across Canada serving elaborate treats such as Maple-Bacon and Chicken-and-Waffle doughnuts, coffee breaks are turning into foodie adventures.

8. Natural bitters: It’s no surprise that intricately curated, sophisticated cocktails are back big-time. But what’s new to the mix are homemade bitters: Flavourful infusions that are the backbone of the new golden age of mixology. For years the only bitters that seemed to exist was the old Angostura bottle, but lately there’s been a boom in artisanal all-natural brands ranging in flavours from blood orange to chocolate lavender. They’re the secret ingredient in signature cocktails – especially when you make your own.
Winter stormy cocktail

10. Bison: This year’s “it” meat will be bison, a game-changer of a game meat. Raised at ranches across Canada, but especially in Alberta, it’s prized for it’s low fat yet tender bite, free-roaming grassy lifestyle, and versatility in the home kitchen. Think beef, but beefier and healthier.
Best bison dishes in North America