The perfect burger: Best for a backyard BBQ!

With only one week to go until Labour Day weekend, we’ve been firing up the BBQ as often as possible and the most recent recipe to hit our grill was from Chatelaine’s Summer Cookbook’s "The Perfect Burger." 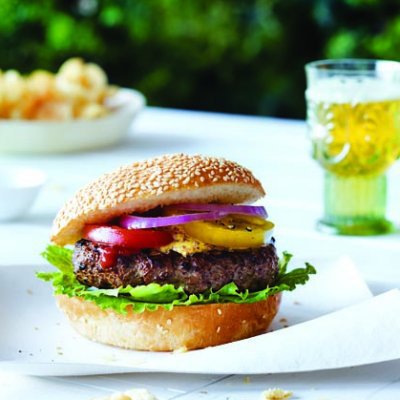 With only one week to go until Labour Day weekend (where, oh where, did the summer go?), we’ve been firing up the BBQ as often as possible to make the most of grilling season. And the most recent recipe to hit our grill was from Chatelaine’s Summer Cookbook’s The Perfect Burger.

Don’t let the simplicity of this burger fool you. With only a handful of ingredients, these patties were still plenty tasty and appealed to both little and grown-up palates. It’s also one of the first recipes we’ve come across that doesn’t call for breadcrumbs, which makes these burgers suitable for those with gluten-free needs. The patties are made with medium ground beef (although I used lean, which worked just fine), one egg, Dijon mustard, Worcestershire sauce and seasoning (salt/pepper). That’s it.  I whipped the burgers up in fewer than fifteen minutes, which left plenty of time to prep the dessert and salad before our friends arrived for a late summer BBQ. Just remember to use your thumb to make a shallow depression in the centre of each patty before grilling, so they don’t shrink up.

These burgers were super-tasty, but that isn’t the only reason I think they’re deserving of the ‘perfect’ title: This is an ideal base recipe that allows for plenty of creativity. For example, next time I might add in some chopped basil and shredded mozzarella. Or jalapeno peppers, with Havarti slices on top. Or roasted red peppers with a sprinkling of feta.

So because of the possibilities for creating my own signature burgers with this recipe, these are going on my ‘Best for backyard BBQ’ list!

Try this recipe: The Perfect Burger