Spaghetti with chicken meatballs: From dinner to lunchbox!

With school in full swing and busy, cooler nights, I’ve tried to plan meals that not only fill us up, but are great for (hot) packed lunches. Which prompted me to give this pasta dish a try 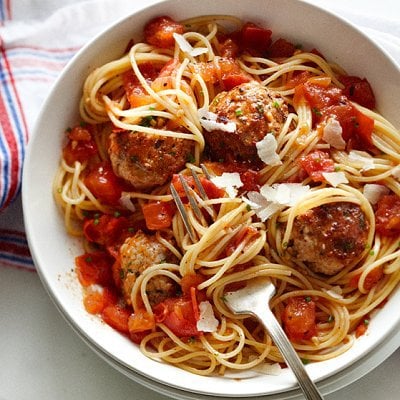 With school in full swing and busy, cooler nights, I’ve tried to plan meals that not only fill us up, but are great for (hot) packed lunches. Which prompted me to give the herbed chicken meatballs with spaghetti a test run.

I’m going to preface this post by admitting that I suck at making meatballs – more specifically, making them round. I’ve tried everything (aside from freezing them before baking – does that actually work?), but my meatballs end up being every shape BUT round. Regardless, I wasn’t going to be deterred from trying again so I assembled the ingredients and got to work.

The meatballs were easy to make and quick to pull together. You combine a bread paste (made from a slice of white bread mashed with a touch of milk), ground chicken, egg, Dijon, Worcestershire sauce, chives, and spices.  If you’ve worked with ground chicken before you know how wet it is…and this mixture was no exception. However, I dampened my hands slightly as per the instructions and attempted to roll one-inch meatballs for the waiting heated and oiled frying pan. Once again, I have to admit I do not make ‘pretty’ meatballs (more hockey puck shaped), but they were tasty!

I made the meatballs earlier in the day because I had to throw dinner together pretty quickly, and they reheated with the sauce just fine. Once the spaghetti was in the boiling water I prepped the sauce, which is made with chopped plum tomatoes, fresh chopped garlic, dry wine (I used white), and salt and pepper. After the sauce cooked for close to five minutes, I added the meatballs in to warm and we were ready to go.

This dish was delish – very fresh tasting, thanks to the made-right-before-consumption tomato sauce and the garden chives in the meatballs. Plus, leftovers were happily consumed for lunch the next day.  The only change I would make next time (and there will be a next time) is to double the sauce because we like our pasta pretty saucy. Oh, and maybe taking a meatball-making course…if there is such a thing!