I declare the Sharp-cheddar zucchini bread the "Loaf of the Year", ousting banana bread as the long-standing, perfect, multi-purpose food item. Although this recipe is filed under the Breakfast and Brunch chapter of the Chatelaine cookbook, I could just as easily introduce it as a subtly-sweet dessert slice and not encounter any naysayers. 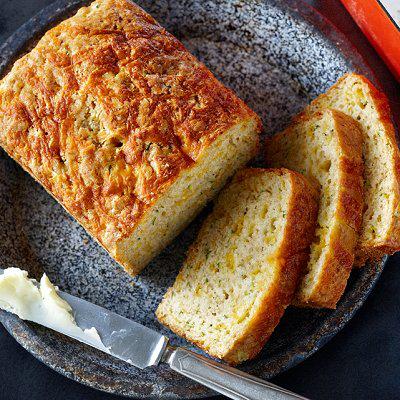 I declare the Sharp-cheddar zucchini bread the “Loaf of the Year”, ousting banana bread as the long-standing, perfect, multi-purpose food item. Although this recipe is filed under the Breakfast and Brunch chapter of the Chatelaine cookbook, I could just as easily introduce it as a subtly-sweet dessert slice and not encounter any naysayers.

I was eager to use my brand spanking new loaf pan. Mind you, not eager enough that I didn’t leave it in the cupboard for over two months since I purchased it and washed it. No, I did not buy a new loaf pan to replace an old overused version. This was my very first loaf pan ever and it fits quite nicely in the cupboard.

Our 19-year-old student/housemate/sister-in-law had chosen this recipe and suggested I make it while we were waiting for our dinner to simmer. I had planned on making the loaf in the evening after our toddler had gone to bed. A good idea, in theory, but my energy level is usually extraordinarily low by that time. Plus, according to the recipe, the preparation time was only 15 minutes, which meant that I should be able to make it and have it bake in the oven while we all sat down to dinner. Really? Could life be that simple? Would we really be able to sample a warm, fresh-from-the-oven loaf after dinner? And (gasp) only have to clean up one round of dishes for the night?

Preparing it was very simple and fast, particularly when you have a helper to grate the cheddar for you while you measure and combine the rest of the ingredients. Being able to mix it all by hand simplifies the number of utensils to clean up later. Sure enough, it was ready to go into the oven just when our dinner was ready to be consumed. Forty-five minutes later, I tested the loaf using the toothpick method, as I do not own a cake tester: insert the toothpick into the centre of the loaf and see if it comes out clean. I pulled out the toothpick, which looked clean to me, but considering that the toothpick was the same colour as the loaf, how could I really be sure? I thought I would tempt fate and place the loaf back in the oven but turn the heat off. This way, I was neither proclaiming it done nor not done. I set the timer for 5 more minutes, then removed it and let it stand for 10 minutes, as instructed in the cookbook. Our two year-old saw it on the cooling rack and announced, “Bread. Want some. Puh-lease.” You would think that we hadn’t just fed him dinner.

We all had a piece—well, one of us had two pieces (the one with a baby in her belly)—and it was delicious. It did not even require a pad of butter! 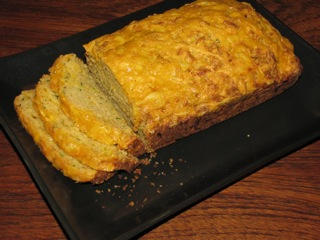