There were two reasons I picked this recipe from chatelaine.com: One, it calls for puff pastry…from the freezer section, and two, caramel sauce is a main ingredient. Need I say more? 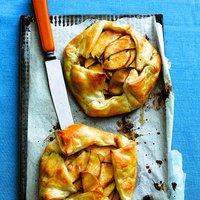 There were two reasons I picked this recipe from chatelaine.com: One, it calls for puff pastry…from the freezer section, and two, caramel sauce is a main ingredient. Need I say more?

Another bonus of this rustic caramel-apple pie is that it’s filled with crisp orchard fruit, which is available locally and in abundance right now. At first I considered going (cheating) with jarred caramel sauce. Why bother making it when store-bought is just fine? Now I understand why one should bother. Homemade is better.

As I perused the recipe steps, I realized something about my cooking style; call it attention deficit cooking disorder. For some reason, I have a compulsion to change up the ingredients as I cook. For example, I wondered how I might squeeze some hidden veggies into the apple pies (insert sad face for the husband and kid). But then a little voice said, “Don’t mess with dessert, Karma.”

So I stuck to the recipe. Once I finished stirring everything in, I took the sauce off the heat, planning to let it stand for one-minute as suggested. Well, 10 minutes and one three-year-old meltdown later, I finally got back to the sauce. And it was solid. I hacked at it for a bit, then whisked in the cream. Luckily, it was (mostly) salvaged, and while my vigorous whisking made it a tad runny, it tasted spoon-licking amazing. I would add double the cinnamon next time, however, to give it a stronger flavour.

The apple slicing was super easy with my old-fashioned apple kitchen tool, which peels, cores, and slices all at the same time. After that, I invited my mini sous chef to help with the assembly. Anything with the term “rustic” in it is well suited to a preschooler’s skills, I figured. We tossed the apples with the caramel sauce (after a few taste tests), and spooned the mixture onto the squares of puff pastry. We created the pies’ rustic shape by folding over the corners of the puff pastry, and then popped the pies in the oven.

I think the pies could have baked another five minutes or so, but I received no complaints from my dinner companions. And when I saw both hubby and kiddo licking their plates, I was glad I hadn’t tried to slip in some grated zucchini after all…