I was dreaming about Oscar night and thinking how it would be fun to have a handful of friends over, get dressed up and serve aesthetically pleasing appetizers on glamourous trays while our son sleeps soundly, calmed by the mixed voices emanating from the living room. Then reality set in. 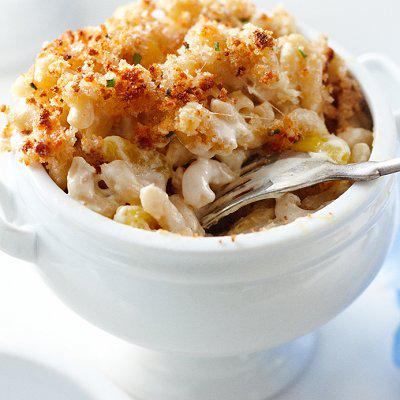 I have been dreaming about Oscar night and thinking how it would be fun to have a handful of friends over, get dressed up and serve aesthetically-pleasing appetizers on glamourous trays while our son sleeps soundly, calmed by the mixed voices emanating from the living room. Then reality set in. Our son is suffering from an ear infection, yet still goes to bed hours later than other toddlers we know, and we are all (my husband, our housemate and I) subsequently suffering from frequently interrupted sleep.

The thought of hosting a group of people who would likely stay past the double digits on the clock and the thought of me having to be clad in something other than pyjamas on Sunday night shattered that dream. So, new idea: Hosting a more exclusive Oscar party only for people who live here. And instead of fancy appetizers, how about good old comfort food, like Whole wheat mac and cheese, served in cocktail glasses? That’s more my style this Oscar season.

I had never made mac and cheese before (other than the kind purchased in a blue box). And eating homemade mac and cheese is something I’ve tried only within the last year, made by three different women I know. One made by a woman at the office who brings in mac and cheese for potluck lunches and the other two made by mothers with young ones at home. In fact, on the two occasions I’ve had it at our friends’ houses, it was made as a dish for the children while the adults ate something else. Oh how I wanted to be a toddler on those occasions. Homemade mac and cheese? Yes please!

This particular mac and cheese features cooked squash which adds to its creamy texture. It also adds to the prep time as I find cutting squash to be a somewhat difficult and painstaking task. Thankfully, I had the help of my 19-year-old housemate/student/sister-in-law who grated and cubed the cheese while I cut up the squash (not my fingers), and my husband and a friend watched over our toddler.

I must say that, once the squash was cut, prepping this dish isn’t difficult to do. But it does use up a lot of dishes, which I didn’t really expect: A food processor, two large pots, a bowl, and a 9 x 13 inch (3L) baking dish. Not to mention knives, a cheese grater, a potato masher, some measuring devices and a slotted spoon. I’m not complaining, I’m just saying that once you’ve got the mac and cheese under the broiler, take a look around at the carnage in the kitchen. It may surprise you. It’s a good thing that the men were on cleanup duty after supper.

This mac and cheese is delicious. We four adults had generous helpings. We ate it with a green salad and it made for a tasty and filling weeknight meal. The recipe makes 8 servings meaning that a) I couldn’t get it all to fit in the 9 x 13 inch baking dish and b) there was still a lot left over for us all to take for lunches the next day.

Oh, and if you want to dress it up for Oscar night, just spoon it into nice cocktail glasses like we did! What do you think? 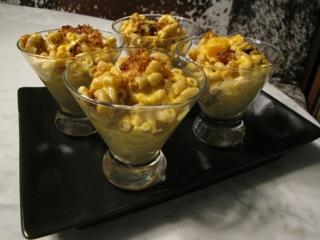