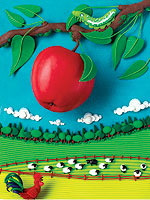 I’m what you might call a lazy organic. I think organic food is better for me, but I can’t justify shelling out double for pesticide-free broccoli or buying frozen dinners that cost more than takeout. But I’m changing. I have a little guy at home in the high-chair stage and I pay a premium to ensure that his first foods contain fewer pesticides and antibiotics. Plus, my grocery store is making organic more affordable and available: organic baby food costs almost the same as regular, the organic produce section is growing daily, and I can pick up organic ice cream and tomato sauce at digestible prices. No wonder organic-food sales are jumping by 20 per cent every year.

Like me, you probably wonder whether an organic diet will boost your health and tantalize your taste buds enough to justify higher grocery bills. (One recent survey sponsored by Life Choices Natural Foods found that 55 per cent of Canadians eat organic foods occasionally.) To help determine what’s worth putting in your shopping cart, I reviewed the research, talked to health experts and taste-tested a slew of products. Select a food group from the drop-down menu below for all you need to know.


Farmers who grow wheat, barley, rye and rice organically avoid chemicals and genetically modified organisms (gmos). To be certified organic, packaged products such as bread, crackers and cookies have to be processed with organic ingredients in an approved factory.

Health difference About 43 per cent of non-organic grains tested by the U.S. Food and Drug Administration had pesticide residues, with wheat and oats more likely to be contaminated than barley and rice. It would be nice to know if organic grains are healthier, but few studies have been done to date. Tests do show that organic grain-fed chickens lay more eggs that keep longer, and that rats that eat organic grains have fewer stillborn babies.

Price difference Organic breads, cereals and rice sell for about $1 to $2 more on average than non-organic.


That bag of organic salad greens seems like an investment purchase because, well, a farmer invested serious effort to keep chemicals away. Produce farmers can only be certified organic by an accredited certification body if they avoid using synthetic pesticides, herbicides and fertilizers and gmos (such as some seeds).

Health difference About 73 per cent of conventionally grown fruit and vegetables harbour pesticide and herbicide residues, compared with 23 per cent of their organically produced counterparts, according to a scientific review by the U.S. Consumers Union. At high levels, pesticides have been linked to cancer and reproductive problems.

“It’s just common sense: if a pesticide can annihilate a bug, it won’t do us a whole lot of good,” says Vesanto Melina, a registered dietitian in Vancouver and author of Becoming Vegetarian: The Complete Guide to Adopting a Healthy Vegetarian Diet (John Wiley & Sons). While you may ingest a small amount of pesticides when you eat, say, a sprayed peach, Melina says that we still don’t know what the cumulative health effects of a mixture of pesticides over a lifetime could be. Are organics more nutritious? While dozens of university studies have found that organic produce, such as strawberries, offers higher vitamin levels, some experts aren’t convinced. “Current scientific evidence doesn’t show that organic is any more nutritious,” says Paul Fieldhouse, a nutrition policy and research analyst for Manitoba Health.

Price difference It varies by store, region and time of year, but everyday organic fruit and vegetables sell for about 10 to 20 per cent more. Some off-season fruit are prohibitive: I paid a staggering $10.48 for a bag of organic grapes in December.

Organically raised dairy cows live well in roomy stalls, graze whenever they want and munch on organic feed. If a cow gets sick, it can only be treated with certain medicines. Cows that are treated with antibiotics get tagged or removed, and their milk will never be sold as organic. Processed organic dairy foods are also made without dyes and fillers.

Health difference Ordinary Canadian milk is healthy, safe and free of insulin-like growth factor-1, a potentially carcinogenic hormone used often in the U.S. But it’s possible that organic milk may contain more healthy ingredients than its conventional counterpart. A study from the Institute of Grassland and Environmental Research in Wales found that organic milk can contain 64 per cent more heart-friendly omega-3 fatty acid.

Price difference You’ll pay substantially more for organic dairy products. (While I got a deal when I paid $2.59 for 500 millilitres of organic milk, my store stocks some 300-gram bricks of cheese for a daunting $8. Yikes!)

Pigs, cows and chickens that are organically raised live on chemical-free feed and aren’t given growth hormones, antibiotics or animal-based feeds. When the end is near, organic animals are killed and processed in special organic slaughterhouses, or in regular ones first thing in the morning when they’re still pristine.

Health difference Health Canada recently conducted a review of growth hormones that are used in regular Canadian beef and concluded that they are safe. But many experts disagree, given that high exposure to growth hormones in beef has been linked to cancer and hormonal problems, such as early puberty. Plus, our cows get regular vaccines and antibiotics, as do pigs, chickens and other farmed animals. “The degree and use of these products is probably highest in the hog industry,” says John Hollinger, an organic agriculture specialist for Manitoba Agriculture, Food and Rural Initiatives. Studies have yet to confirm how this will impact our health.

Registered dietitian Melina says that pesticides in conventional meats are also a concern. “We know that pesticides concentrate as they move up the food chain,” she says. One landmark study published in The New England Journal of Medicine found that vegan women had lower pesticide levels in their breast milk.

Price difference It costs farmers two to three times more to produce organic livestock, says Vitins, so meat, poultry and eggs go for about double the conventional cost. They can be difficult to find – you may have to visit a farmer’s market or health food store.

Under Canadian law, organic packaged foods contain only natural additives that help preserve food safety. That means no irradiation (where foods are blasted with high energy to help preserve them), no hydrogenation (read: no heart-harming trans fat) and no monosodium glutamate (msg).

Health difference Consuming fewer additives and preservatives may be beneficial to your health. Studies from the University of Illinois, among others, have shown that popular food additives might have negative effects in animals, such as increasing their risk of cancer. “The more natural the foods we eat, the better,” says Kathy Gottschall-Pass, a nutrition professor at the University of Prince Edward Island. But since we have no conclusive proof of their danger to humans, there’s no need to panic.

Price difference The range is wide: you can buy one jar of organic tomato sauce for $4, while another brand goes for $8. Larger, national organic-food distributors such as Nature’s Path, Amy’s and pc Organics tend to sell their wares cheaper than mom-and-pop organic-food producers.