Join us for a visit with Nigella Lawson in her London home, where she spills about her kids, her new TV show and the marvels of spandex. 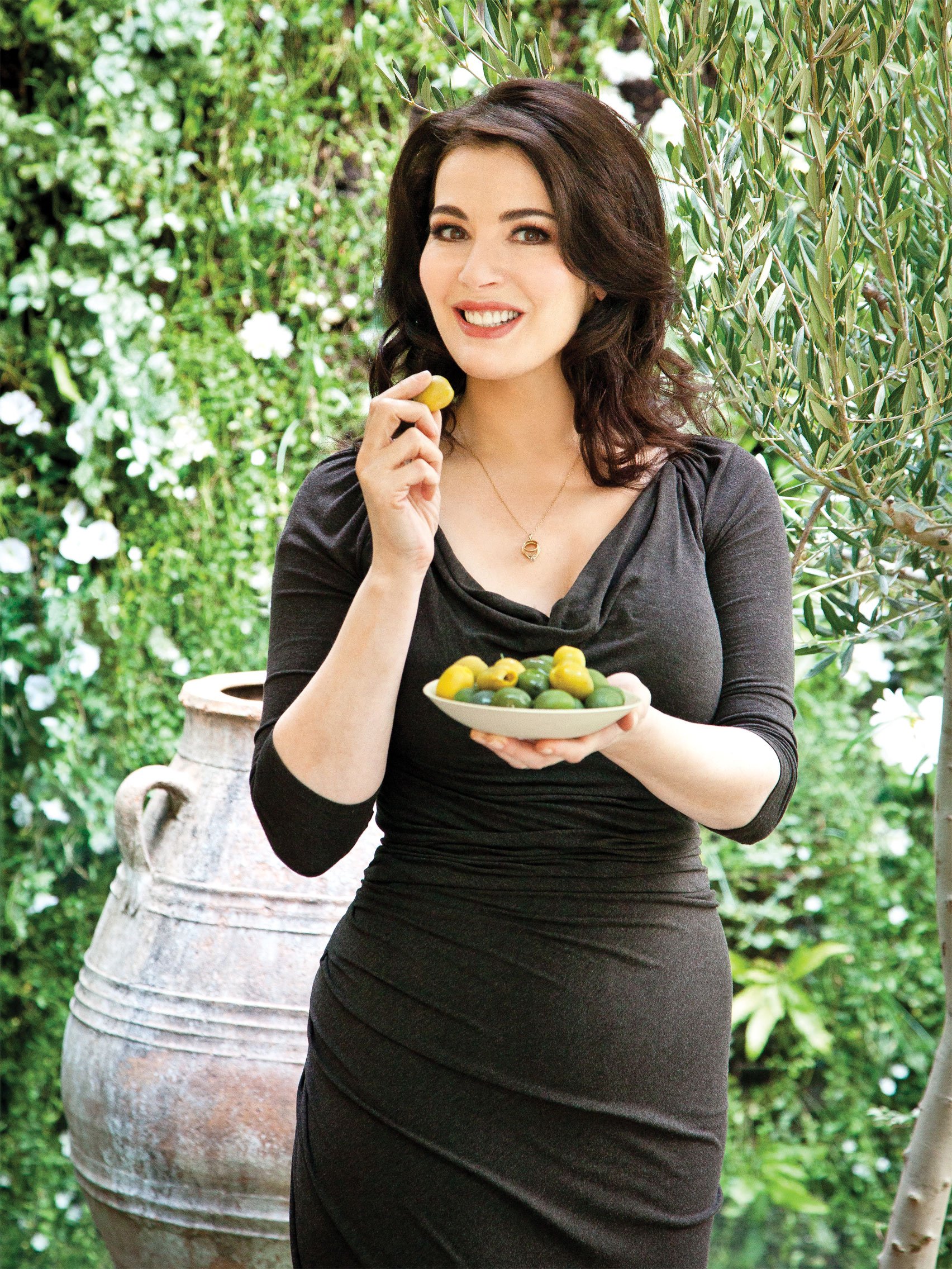 One of life’s great pleasures is to sit in a kitchen and chat to the cook. When that kitchen belongs to Nigella Lawson, it feels like an almighty privilege, too. Nigella has a way of making you feel clever and connected, in the way that she is. “Do you know so-and-so?” she will drop into a conversation, however unlikely that is; she makes references to famous restaurants that she assumes you’ve been to, which makes you feel that you too are just as glamorous and successful. It’s one of those gifts that some people are born with; these are the people whose stars often shine brightest.

Not only is Nigella talented and famous herself, so is her husband, Charles Saatchi, Britain’s most powerful collector of contemporary art. An assistant answers the door to their fortress-like stuccoed house in London. The main floor is all one room: huge, white, modern and very, very impressive. To one side hang two vast canvases (hard to tell if they are paintings or photographs); to the other, a large circular shoe rack with mismatched shoes, which Nigella later cheerfully confirms is art.

There seems to be no view of the street. Instead, a glass wall leads the eye to a small courtyard with an expansive living wall of plants. It is the home of people who want — who maybe need — to be protected from the world.

The open concept main space is divided in half by floor-to-ceiling bookshelves filled with Nigella’s library of more than 6,000 cookbooks. Behind the bookshelves is the kitchen. It is a modern steel version of a country kitchen, not the one in her shows but a large free-standing U-shaped island, with pots and pans on hooks hanging down from above. It is cluttered but organized. There are busy surfaces with cleared working areas and a broad, rustic wooden table that would comfortably seat eight, at one end of the U-shaped counter. It feels like the hub of the home, a place that encompasses more of life than just the cooking that is done there. You want to sit and talk while the chopping or washing-up is done; it’s a living space, not a show kitchen.

Nigella emerges from the office area behind the kitchen, where three assistants, all dressed in black, are beavering away, posting copies of cookbooks, sealing up boxes, taking endless phone calls. After all, this is a woman at the helm of a global empire; her cookbooks have sold millions of copies worldwide; she has eight television shows and her own kitchenware line, Nigella Living.

She is brisk, businesslike and professionally friendly, and she speaks very fast (at least half a day’s conversation is packed into an hour) in a throaty, well-educated drawl.

She is confident, a little grand, perhaps, and she is absolutely ravishing, the sort of beauty that appeals to both men and women: the creamy-pale, flawless skin, the thick dark hair, fine features and bee-stung mouth (no one can lick a spoon quite as lasciviously.) And of course, the famous Jessica Rabbit body, currently very slender and poured into a form-fitting black number (“with a lot of help from spandex,” a typically self-deprecating comment) above towering black heels. She kicks them off, one suspects with relief, when she curls her
legs up next to me on the huge cream sofa to talk about, among other things, her new book and TV show, Nigellissima.

The show is, she says, “the sort of cooking I do at home when I’m using Italian ingredients but taking liberties.” Italy and its cuisine have been a lifelong passion for Nigella, but it took her years to develop the confidence, as an English cook, to publish a book of Italian food. “It may not be authentic, but it’s authentic to me. People forget that you could go to eight different homes in a village in Italy and eat eight different versions of the same thing.”

She shows me, with rather touching pride, the Italian translation of the book. She has, she says, become accustomed to seeing her name on a book, but “to see my name on an Italian book about Italian cooking — well, I was thrilled.”

On her children: “They need me just as much, if not more, now that they’re older [they are 16, 18 and 19]. And I need them; I like their company. I’m also aware that we’ve only got a few more years together at home, so I’d rather be cooking supper and eating with them than going out a lot.”

On being yourself: “A lot of life is about overcoming the vision you have of yourself. That’s why living in Italy [for a year after school] was so important to me. I was always shy, but there no one had a particular picture of me. Plus, the freedom of speaking a foreign language meant I could dispense with all that annoying detritus of myself, the awkwardness.”

On cooking: “I don’t cook overly complicated things often, but I do cook a lot—an awful lot more than what goes into the books. And I always cook with purpose; I’m not interested in food trends. I feel one great advantage of being a home cook is that you’re not trying to be novel.”

On guilt: “I like all manner of food. I’m not a snob. I don’t feel guilty about eating—unless it’s something that has caused cruelty. Plus, I’m at an age when I’ve eaten more meals than I’ve got left to eat, so I have to make each one count. I’m not a snacker—I do like food to be good, and I get very hungry!”

On baking: “When I was growing up, cooking was considered the real deal, and baking was just measuring things. But then when I started, I loved it! I found the act of turning all these different ingredients into one thing to be absolutely magical.”

Get a sneak peek of her new cookbook, Nigellissima, and she shares five delicious recipes.