Between our last barbecue of 2010 and our first of 2011, I stopped eating meat. Most of our friends are omnivores, so this means that I have to find some new veggie-friendly options for the barbecue. 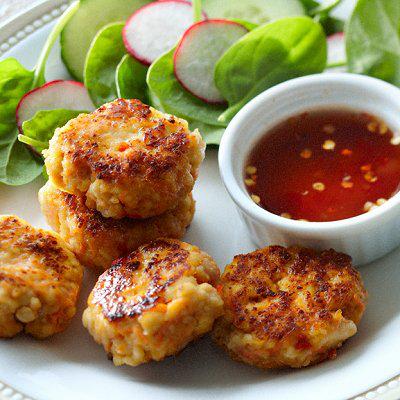 When you’re a renter in Toronto, outdoor space comes at a premium. My husband and I were lucky enough to snag an apartment with a patio and a backyard at a not-insane price — we will never move again — and this means that our place is now barbecue central. We actually grilled outside in February last year, because the winter was so mild. This year we put it off until April, but now that it’s officially warmed up we’ll be having regular grilling parties with friends.

But here is the catch: in between our last barbecue of 2010 and our first of 2011, I stopped eating meat. Most of our friends are omnivores, so this means that I have to find some new veggie-friendly options for the barbecue. I don’t want to get lazy and just rely on store-bought veggie burgers; my friends really bring their A-game to these cookouts, so I feel like I have to do the same.

With that in mind, I picked three Chatelaine recipes to try out: savoury sesame-tofu cakes, fresh fruit salad with lime-ginger drizzle, and sweet peppers with garlic-herb oil. I figured that would give us something to eat pre-barbecue, something to grill, and something to pass around that didn’t have to take up BBQ space. 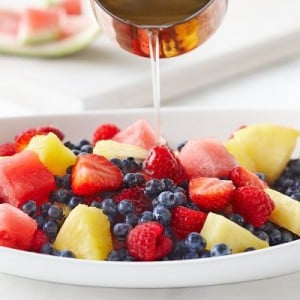 The fruit salad was a nice healthy change from our usual pre-grill snack of chips. I bought a bunch of fresh fruit from a local market — blueberries, blackberries, raspberries, strawberries, watermelon and kiwis — and it’s hard to go wrong there. The drizzle sounded intimidating but was actually really easy. I used coconut sugar because that’s what I had in the house, and it cooked up quickly on the stove. 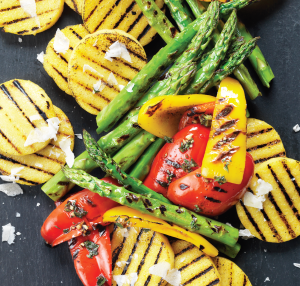 The peppers were great on the grill — even before it was all veggies, all the time, I loved grilled peppers. I made the oil in advance and let the chopped peppers sit in it for a few hours so they could really soak up the flavour. I added some white and green asparagus to the mix as well — I love that on a grill too. I’d expected that I’d have some peppers leftover to use in pasta during the week, but they were all eaten.

My experience with the savoury sesame-tofu cakes was less of a success, unfortunately. I attempted to make the recipe vegan by replacing the egg with flax meal and water. I also replaced the regular flour with chickpea flour, because I had no white flour on hand. (Can you tell that I don’t really bake often?) This resulted in a bowl full of crumbled, seasoned tofu that refused to stick together in balls. I gave up on it, since we already had a lot of food at the party. I now have a few baggies of crumbled tofu in my freezer that will find another life one day as tofu scramble.

In all, I feel pretty confident that I can still enjoy eating al fresco post-meat. The July issue of Chatelaine features two veggie burger recipes — a quinoa-veggie burger and a chickpea-falafel burger with cucumber — so one of those will definitely be on tap for our next BBQ party!

Do you know any great barbecue recipes that are vegetarian-friendly? Please share them here!