We recently asked our readers for their worst holiday entertaining disasters and we got some doozies! There is no doubt about it: cooking a turkey is not as easy as it sounds. Use these stories as cautionary tales as you prepare to host your friends and family this year. And be careful! 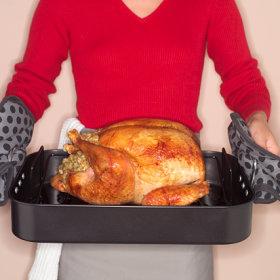 We recently asked our readers for their worst holiday entertaining disasters and we got some doozies. There is no doubt about it: cooking a turkey is not as easy as it sounds. Use these stories as cautionary tales as you prepare to host your friends and family this year. Be careful out there!

I once made a homemade sweet orange cream liqueur as a hostess gift to take to a neighbour’s party. I poured the cooled liquid into a beautiful glass bottle, which I decorated with a ribbon and some jingle bells. Unfortunately, I forgot to leave headspace at the top of the bottle and filled it to the rim before capping it and storing it in the fridge….fatal error. At the party, my neighbour added my bottle to several others on his kitchen table. An hour later, as the party was in full swing, an earth-shattering explosion occurred in his kitchen which stopped everyone in their tracks. All I could say was, “Tell me that’s not the orange liqueur.” Then I saw the ribbon with jingle bells…on the floor clear across the room…and knew the worst had happened. As the alcohol warmed to room temperature, it had expanded and, with no headspace inside the bottle, had shattered the bottle into a zillion pieces! There was sticky orange liqueur covering EVERY surface in the kitchen…counters, appliances, ceilings, light fixtures, vertical blinds, floors, IT WAS EVERYWHERE! And mixed in with all that goo were thousands of shards of glass. I was absolutely mortified and spent the rest of the party cleaning up the incredible mess before making a hasty retreat back home! Fortunately, my neighbours had a good sense of humour about it and said their only regret was they didn’t get to try the drink before it exploded!

The first year my husband and I hosted Xmas we pulled out all the stops – activities for the kids, food, decorating. We bought bunk beds – you name it. Very early Xmas morning we could hear a lot of activity upstairs and a lot of trips to the bathroom. It turns out my nephews had brought a nasty GI bug with them and they proceeded to infect everyone in the house. My youngest nephew was opening his stocking from Santa and throwing up into a mixing bowl (we have pictures). No one wanted to eat the delicious turkey dinner we prepared as everyone was up and down to the bathroom. It was so depressing and just…gross. We had to wash just about all of the linens we owned. Only plus? It really cut down on holiday weight gain!

My first time making a turkey, I had no idea how long it needed to be baked! I left it to the last minute, and we waited and waited and waited. By the time it was finally done, it was past midnight, and everyone was starving! I was so embarrassed.

One Thanksgiving when I was about 12 or 13 years old, my mother put me in charge of the pumpkin pies. This was a big honour and as I took my pies out of the oven I was delighted – they looked and smelled wonderful. That evening the pie was cut and served and I was anxiously awaiting everyone’s feedback. Instead I was faced with silence as my family and extended family dug into their pies. I couldn’t understand the cool reaction to my wonderful looking pies, until I took a bite. I had made a double recipe and had doubled everything but the sugar. Pumpkin pie without the sugar is just not good. Everyone was very gracious and just kept topping up their pie with whipped cream.

Maybe not a huge disaster by some standards, but for a young girl given such a big responsibility it was devastating!

As an alternative to a cookie exchange where everyone brings one type, I decided to do a “Big Bake” with friends so we could bake together the recipes we wanted. So last year I shopped for ingredients of 10 + cookie varieties and invited five friends and their extra stand mixers etc. over to my house for a day of merrymaking in my kitchen. We all had visions of a festive day with girlfriends: Christmas carols blaring, egg nog, wine, nibblies and lots of laughs. There were simply too many recipes to crack off and we were stressed! It was nine hours of total chaos and it looked more like a sweat shop with flour flying through the air. My kitchen was a disaster and we ran out of hot water from washing so many dishes. This year we’re doing a cookie exchange and drinking wine.

One year for Christmas we were having 25 people for dinner. We knew we needed a large turkey so we ordered a 34lb turkey from the turkey farm. Early Christmas morning I got up to put the turkey in the oven…all was good until I tried to close the door. It would not close. Despite it being five in the morning and me being half asleep my brain cells were firing on some level and I came up with a solution……..Duct Tape! I Duct-taped the oven door closed and all was right in our Christmas world that day. And we now know we have a 29lb limit on the oven!

A few years ago, at the last minute, the family let us know they were coming for Christmas dinner. I was working a double shift so called hubby to let him know and to pick up a turkey. When I got home the next morning, the day everyone was to arrive, I proceeded to the bird. It was big, but never thought anything about it. Got it stuffed and trussed and had to borrow a big pan from a neighbour to fit it into, proceeded to open the oven only to discover there was no way this turkey was going to fit. Needless to say, I had to un-stuff it and hack it up into smaller pieces. [It] just was not the same. It really looses something when it’s not cooked whole. And we ended up eating turkey for weeks it seemed.

It was twenty years ago that we had a brand new kitchen installed, with new appliances of which we were very proud. The turkey was stuffed and ready for the brand-new oven, and in good time, just after one in the afternoon. I asked my husband to put the bird in the oven and turn it on. We headed to the ski hill for a fun-filled afternoon knowing that the turkey would be ready when we returned. The house was fragrant with wonderful roasting turkey when we arrived. I got the potatoes and veggies ready and settled down for a drink before dinner. One of the kids wandered into the kitchen and noticed the turkey in the oven with the lock on, I rushed into the kitchen and there it was: the oven had been set to clean! There was no way to stop it, and in horror we watched the turkey going from luscious tan to black char! We ate potatoes with vegetables and a fried egg on top!

One Christmas when our two little ones wanted to help their Dad with the Christmas dinner he decided they could help him “Dance the turkey” [wherein] he would hold the turkey up by the wings and the little ones each took a turn singing a Christmas song making the legs dance. It got to be a tradition: each turkey had to be danced before cooking as it was the best turkey we had ever had. Well, one year my Hubs decided just to do the turkey, no dancing and it was the turkey from hell. It wouldn’t cook. It wouldn’t brown, it was tough, just horrible. From that day on the turkeys all have to be danced first. My Hubs passed away this year and this will be the first Christmas without him and him dancing the turkey. My new daughter-in-law was doing the Thanksgiving turkey so I told her about the dance. She was cooking at her gramma’s and started to sing and dance the bird. They thought she was crazy so she told them our tradition. They all thought it was fantastic and the bird, yes, it turned out great. My daughter dances the turkey with her daughters so that tradition their dad/poppa started about 33 years ago will live on.

My best kitchen holiday disaster happened to me when I was around 12 years old. I was carrying a deep fryer in my parent’s kitchen and it must have been greasy on the sides as I remember it starting to slip and thinking that this was not going to turn out good for me. Fortunately, the oil was still cold as it had not been plugged in yet! It slipped from my hands, fell straight down to the carpet floor (back in the 80’s people had carpet in their kitchens) and there was an immediate oil geyser that rose from the pot, it splashed so high that it hit the ceiling, it was dripping from the ceiling, dripping from me and all over the floor. My mom was just standing there in amazement I think, I don’t remember too much yelling but there was a lot of cleaning that needed to be done. We had to hurry because all the company was coming over for the big meal. I do remember that my parents had to have the ceiling repainted and the carpet cleaned up pretty good as it had some magical stain resistant coating on it!!

Do you have any holiday entertaining disasters to beat these? Share with us in the comment space below.