There’s nobody better to help test out a new recipe than your closest friends. If yours are anything like mine, then they won’t be afraid to overeat, they won’t hold back with their feedback, and no matter what they will appreciate your effort! 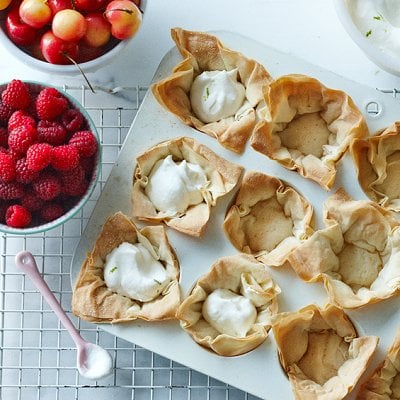 There’s nobody better to help test out a new recipe than your closest friends. If yours are anything like mine, then they won’t be afraid to overeat, they won’t hold back with their feedback, and no matter what they will appreciate your effort.

Last week was my best friend’s birthday and I was hosting a dinner party in her honour. So what better time to try out some recipes that I’d been eyeing?

With summer (almost) in full swing, I wanted to make a nice, fresh meal. Roasted tomato-pepper salsa, Ginger mojito pork, and Phyllo cups with fresh fruit seemed to fit the bill. I knew my friends would like the sound of that, but they would like the sound of two desserts even more, so I also decided to throw in the “best-ever brownies.” They had the words “best-ever” in the title; I would be crazy not to! 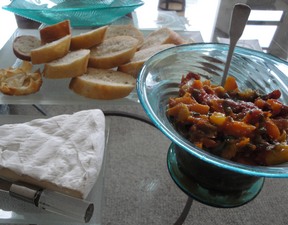 To try and get ahead of the game, I made the salsa the day before and I was pleasantly surprised at how easy it was. A word of warning: this one is spicy. Anybody who isn’t a fan of the jalapeno may want to limit the recipe to one instead of the two it calls for. In the end, because I sliced things a bit smaller, I ended up with something closer to a spread than a salsa, but whatever it was, it was tasty. If you’re not a chip fan (really?), you could certainly serve this with a baguette as a neat twist on a traditional bruschetta.

The day of the big dinner, I decided I would tackle the pork first, since I’ve never really cooked pork before. I was also hosting some non-pork eaters, so I marinated some chicken in the ginger-mojito sauce, too. The marinade couldn’t have been easier, especially since I had my microplane grater on hand to make quick work of the ginger. I made slits in the pork and chicken to help the marinade sink it, and left them both for 15 minutes. My apartment doesn’t allow barbecues (much to my boyfriend’s chagrin), so I went with the recommended alternate method for roasting in the oven. When I took the pork out, I could see why the barbecue is option A. My pork seemed to come out looking a bit, well, grey. To give it a bit more colour, I put it in a pan and browned the outside of the loin before slicing. To my surprise, both the pork and chicken came out juicy and tender. Everyone agreed that the marinade worked well with both meats, but might have benefited from a longer marinating time. Still, this recipe is a keeper and I’m really excited to try it out again on a barbecue.

After dinner, we moved on to the main event: dessert. Or should I say desserts. I had made the phyllo cups earlier in the day and washed and sliced all of the berries beforehand so assembly would be easy. Not wanting to waste the mint I bought for the pork, I added it to the top of the berries for a little extra colour. Considering the minimal time and effort, this dish was a real crowd pleaser. Just goes to show that presentation counts, even when it’s just for friends! 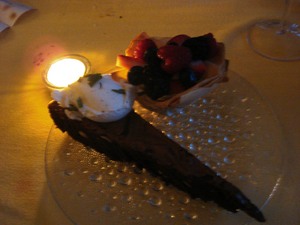 Although I’m not a huge fan of chocolate, I made the brownies because the birthday girl loves the sweet stuff. The recipe was easy to follow and I breezed through it for the most part. Toasting the hazelnuts was not exactly the walk in the park I had imagined, as getting the skins off was a bit labour-intensive. However, I must say it was well worth it. The brownies lived up to their name — they were delicious and decadent, but not too sweet. Served with vanilla ice cream on top (obviously), they were the perfect balance to the fruity phyllo cups.

Best ever brownies? Well, I’ll have to make them a few more times until perfection. But they certainly seemed good enough for my best ever friend.