A meal with a mango: From start to finish this fruit is the star

What meal do you make for the friend who knows everything about healthy eating? A tropical farewell for a dear friend. 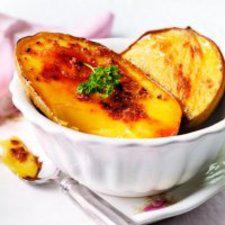 What meal do you make for the friend who knows everything about healthy eating?

I have a habit of finding fantastic English people in foreign countries, and meeting Sussex-born, Brit It-girl Lauren in California was no exception. We first met two summers ago, as lifeguards hired to work at a children’s sleep-away camp. We became fast friends. Lauren was studying to be dietician, and I learned a lot of good eating habits from her over that summer. She works in a hospital now, after spending last summer devising and implementing healthy eating plans for children suffering from malnutrition in Leyte, a small island in the Philippines.

When Lauren suggested a reunion in Toronto, I knew I had to pull out all the stops. We hadn’t seen each other in two years, and I spent some time thinking about all the fun sightseeing we’d do, but what about food?

Mangoes. If there was one thing I quickly learned after landing in England: it may be an island, but it’s far from tropical. And I remembered how much Lauren loved mangoes back in California.

So I went a little mangoverboard for Lauren’s farewell dinner on her last night in Toronto.

It was one those great hot summer days, so we started by whipping up Chatelaine’s chilled mango-pineapple soup. This delicious soup, with the perfect balance of heat from a jalapeno, takes ten minutes to make but requires an hour of refrigeration time. That hour is perfectly filled by muddling up two mango Caipirinha cocktails.

I am not sure if was the mango or the cachaca (the alcohol for the caipirinha) talking, but the night seemed filled with almost too many mango possibilities. We were under the spell of the delicious, golden fruit, and we wholeheartedly tossed any mango-related moderation into the wind. In a cocktail, its juice is tangy and energizing. In its pureed form for a soup, it takes on a much more subtle, sophisticated taste. Chopped into a salsa and sprinkled on top of fish, it adds just the right amount of sweetness to cut through the bite of the onion and jalapeno. But as a dessert, the mango finally takes centre stage.

While our fillets for the Cajun fish tacos were grilling, I started slicing yet more mango, along with tomato, onion, and a little jalapeno into a salsa. With a squeeze of lime juice and little sprinkle of rock salt, the salsa was ready to go.

I warmed up a few corn tortillas, which we had bought earlier at the St Lawrence Market (another sightseeing adventure), and we got ready to assemble our tacos. We were so excited by our mango-infused fiesta that we almost forgot about our chilled soup.

In a somewhat unorthodox fashion, we had our starter after the main dish. I felt I had a real Nigella moment with a Brit in the kitchen as we agreed that the chilled soup would serve as the perfect “palate cleanser” after our tacos. This sounds far more regal and authoritative in a British accent.

We finished the night with bruléed ginger mangoes, with a slight amendment to the recipe. This warm-from-the-oven mango dish demanded a dollop of vanilla ice cream on this hot summer night. We’re not big dessert fans, but we found these caramelized little gems absolutely delicious.

We also toasted friendships that survive distance. The Atlantic Ocean can be so cruel sometimes. We may not see each other for a weekly girls’ night, or even as much as we’d like to, but we’re thankful for having spent one wonderful summer under the Californian sun.