My father had a maternal way with potato and onions – and the memories are sweet, 50 years on 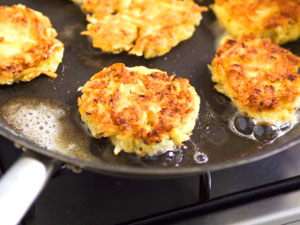 My father, Louis, was a vigilant hand washer. Thank goodness; because by day he was a podiatrist who fixed people’s feet. But by night he loved to cook. On the nights he announced such intentions my mother would, without comment, disappear upstairs, content to relinquish her domestic duties. My father would enter the kitchen wearing his suit, white shirt and tie, with his jacket removed. He would roll up his sleeves, put on an apron, wash his hands, and plunge in.

He always began by sharpening the knives. Accustomed to handling sharp instruments in his profession, he was contemptuous of a dull blade. He sharpened with a flourish, putting to shame the chefs we see now on television.

My father was the only man I knew who cooked in those days, a rarity in the 1950s and ’60s in Winnipeg – and everywhere else – when men went to work and women stayed at home and prepared the meals. Louis Singer did both, and my friends would love coming to the kitchen to share the bounty. Our favourite dish was his potato latkes, and it is only now, after decades of emulating his style that I understand why those simple, old-world pancakes were so delectable.

With a sharp-bladed paring knife Louis would peel several potatoes, never breaking the curl. As a child, I liked to reassemble the potato from the skin without its innards. I would say to my father, “What about these? Aren’t you going to peel these?” And he’d go along with my joke by trying to pick up the empty potato. I somehow found this hilarious. (I guess my sense of humour has become slightly more refined since then.)

In the next phase, grating the onion, I would watch as tears ran from my father’s eyes. My older brother, Morley, would come into the kitchen and we would laugh at the sight of my father crying (the only time I ever saw him do so), and in that curious moment there would be an invisible covenant, as if the tears really meant something, and our job was to cheer our father up.

My father would try to get my brother and me to grate. Invariably Morley would claim he had grated some finger into the potatoes, so he would be excused from further duty. (He was going to be a doctor and therefore needed his fingers intact.)

Out of the fridge came the eggs, purchased at the market on the weekend. This is where our family gambling instinct really burst forth: We would make a bet with each other as to whether the egg was double yoked or not. The prize would be the first latke. When the mixture (potatoes, onion, egg, and a tablespoon of matzo meal or bread crumbs) was ready for the pan, my father would wait patiently for the exact temperature, which would produce an intense gurgle of sound when the potato mixture hit the oil. He would turn down the heat slightly, and call us all to the table.

This was my father’s great gift. He had unlimited patience, not only for the preparation of latkes, but for the whims and inequities of everyday life. Without an elaborate education, he understood a variety of issues that required profound common sense. For example, all the other kids looked at their feet through X-ray machines located in every shoe store. (They were supposed to show if a shoe fit or not.) My father quietly informed us that it may not be good for us. (How did he know?)

He walked with vigour every day, through the heat of the summer and the bitter cold of the winter. He taught himself carpentry, and built us a family room without fanfare. He ate an apple every day, and encouraged his family to do the same, on the premise that it indeed kept the doctor away. He quit smoking, first try, when the news of potential lung damage emerged. He was never ever ill, until he became seriously ill in his seventies. He endured his illness with unpredictable bravery.

Louis Singer was an ordinary man of the time, but with an underpinning of kindness and thoughtfulness, who asked for nothing in return. And, not least, he taught himself to cook, despite a conventional sense of gender roles.

He took his performance in the kitchen quite seriously, and we learned to show our appreciation for it, so that he would keep doing what he did so well. He liked us to be sitting down, ready, when he flipped over the first batch of latkes (never the best, he would say), fried them on the second side and then removed them from the pan to newspapers, which would soak up the excess oil. Not being much of a business man, my father normally used the stock quotation pages. I think it was a mark of respect, too. It would have been rude to see Prime Minister Diefenbaker or President Eisenhower with latke grease distorting their faces.

My father would retrieve the latkes while they were still at their hottest, as if they were a precious catch, then salt and pepper each one individually. We would be salivating from the tantalizing fragrance of the fried potato and onion.

The results were thin, lacy, perfectly browned and crispy jewels. To bite in you had to wait until they were just a little cooler, and then you got that outer crisp coat, with a small core, cooked, but ever so slightly resistant. Al dente is too strong an expression for the texture, but there should be a name for it, because it is unique. The reheated, bland latke wannabe of the modern delicatessen is no contender in this field. My father didn’t think “bought” latkes should be allowed.

Of course you have other food with latkes: hand-grated coleslaw, meatloaf (home ground), sausages, grilled or smoked salmon, and peaches for dessert (home canned). But in our house, latkes were the ultimate. There was just nothing to measure up to the experience, nothing worth taking up limited belly space that you could fill with that last latke.

On latke nights, my father, brother and I would often play triple solitaire. It is somewhat comforting to recall that my father frequently tried to cheat. It demonstrates that he wasn’t perfect.

Late in the evening we would groan with regret at eating too much, but it never stopped us from doing exactly the same thing the next time.

There is only one way to make latkes, and that it is by standing at the stove, and handing them out, one by one. You need the crying phase from the onions, the preparation of the ingredients, the oil at the right temperature and you need clean newspapers. You never put them into the oven to keep them warm. They get soggy. It’s inescapable. So, it’s clear that you only get latkes if someone loves you enough to make them, or, if you love someone enough to do the same. (Prove you love me: Make me latkes.)

Now, on occasion, sitting around a table, when we are cozy and full of good food, I think of my father and his generosity and simplicity, and how he bestowed on us a kind of peace, a kind of savoury music, the irresistible rhythm of filling the kitchen with the unmistakable aroma of latkes.