Pasta is one of our go-to meals, especially when a) life is so busy I can’t think much past a three-ingredient recipe, and b) I don’t feel like cooking (and yes, I know for some boiling water constitutes ‘cooking’). 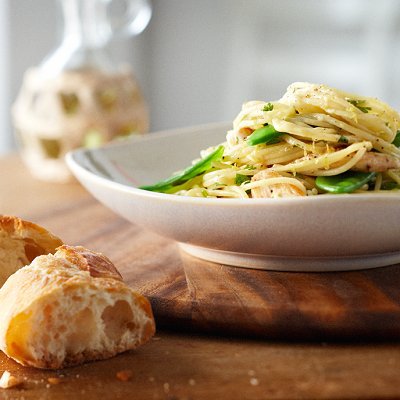 Pasta is one of our go-to meals, especially when a) life is so busy I can’t think much past a three-ingredient recipe, and b) I don’t feel like cooking (and yes, I know for some boiling water constitutes ‘cooking’). But in the summer we typically forgo heavy meat sauces opting instead for dishes like Chatelaine’s lemon chicken spaghettini, from the Dinner in 30 cookbook.

I noticed, as I always do, how many minutes the recipe said it would take: 16, including cooking. But as I scanned the instructions it seemed that 16 minutes was ambitious (heck, it takes longer than that to get mini sous chef from the front door and into her car seat each morning…as anyone with a curious 4-year-old understands). So I decided to set my timer and see if I could do it.

Chef in training is not a lemon fan, so I hid the recipe from him in hopes he wouldn’t notice it was a main ingredient. Or nix the meal before he even tried it. While I waited for the water to boil I trimmed the snow peas and made the sauce: a combo of lemon juice and zest, Dijon mustard, and a tiny bit of sugar and salt that is all whisked together. Once you’ve melted the butter and cooked the garlic for about a minute (there is nothing quite like the smell of butter-fried garlic…), you add in the chicken strips and cook until they’re browned and no longer pink inside. The snow peas take a swim with the pasta for the last minute of boiling and you’re ready to assemble.

As I dished up the pasta, with the lemon-Dijon sauce, snow peas, browned chicken strips, and a generous dose of chopped, fresh cilantro, I glanced at my timer. It read 23:45. So definitely over the 16 minutes, but I guess if I’d used fresh versus dried pasta and only started the timer once the water had boiled, it would probably have been close to a 16 minute recipe. Timing aside, it was refreshing and light tasting, and chef in training had to admit he liked it – lemon and all. But I would likely reduce the amount of lemon zest the next time, as even for a lemon-lover like myself it was a tad tangy. The mini gobbled it up as well, which makes this one a keeper in the family dinners recipe box.