Have you ever made hummus before? How about swapping out the olive oil and tahini for sesame oil and sweet potato? This golden hummus recipe is a nice variation on the classic Middle Eastern chickpea dip. It still looks like hummus and smells like hummus, but the sesame and sweet potato flavours will surprise your guests. 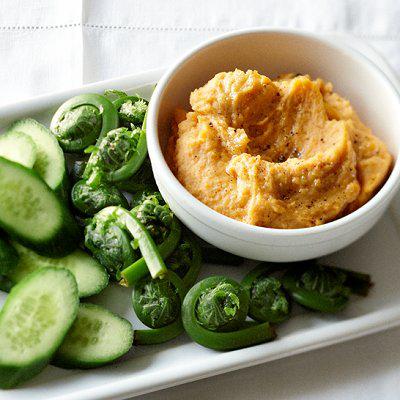 Have you ever made traditional hummus before? How about swapping out the olive oil and tahini for sesame oil and sweet potato instead? This golden hummus recipe is a nice variation on the classic Middle Eastern chickpea dip. It still looks like hummus and smells like hummus, but the sesame and sweet potato flavours will surprise your guests.

I took this to a potluck dinner as a simple appetizer to have before our grandiose feast and was pleased with the response. Everyone who tried it loved it. The biggest fans? Two toddlers, who would have eaten it all up had they not run out of crackers first. Although, being crackerless did not stop our two-year-old from trying to get some more. He dug his fingers into the dish and then started crying because he hates when his fingers get dirty. And apparently he hates it even more when he comes to the conclusion that he is the one responsible for his fingers getting dirty. We washed him up and he made no further attempt to eat the hummus (which meant an increased chance of him eating some dinner instead of just filling up on chickpea dip).

Hummus is the best go to snack to have on hand. Whether it’s to take to work as a snack between meals or to have in your fridge for those weekend impromptu toddler dates, like when your friends pop by between meals but you’d like to have something to offer that is easily snackable for both adults and children alike. I set it out with crackers, carrot sticks, sliced cucumber and julienned peppers.

It’s ridiculously simple to make: microwave the sweet potato while you assemble and prepare the rest of the ingredients in a food processor. Other than the sweet potato, everything on the item list was an ingredient I had on hand: canned chickpeas, lemons, dark sesame oil and garlic. When I’m feeling particularly adventurous (and craving hummus days in advance), I will even soak dried chickpeas for 24 hours then boil them for one hour before throwing them in the food processor. Due to the lengthy soaking plus boiling prep time of dried chickpeas, I need to know a day or two in advance that I will be making it. So I also keep canned chickpeas on hand just in case I don’t have the time.

We ate the hummus accompanied with the Hearty Middle Eastern supper salad, one of my top faves from the Chatelaine cookbook – we’ve had it four times already since blog Day 35! And you can bet that I will pair up these two recipes all summer long. No cooking required! 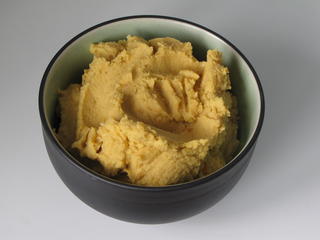