Make a big-batch of delicious tomato sauce this weekend 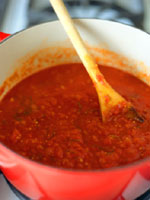 Sure, grabbing a jar of ready-made pasta sauce from the grocery store is easy. But making your own tomato sauce isn’t a whole lot harder (seriously!). Whether you start with garden-fresh tomatoes or the canned variety, homemade sauce is healthier and tastier. Best of all, you can make enough for an army and freeze it for no-work meals year-round.

Just follow these simple steps for the best tomato sauce you’ve ever tasted:

1. Select the best Whether canned or fresh, plum tomatoes make the best sauces as their thick meaty flesh yields less water than other varieties. Beefsteaks work well in a pinch, though. If using canned tomatoes, choose plum.

2. Peel Canned tomatoes are already peeled, but you’ll have to peel fresh ones yourself. It’s a bit of a drag, but worth it: skins become tough and chewy during cooking and will impact the flavour and texture of your sauce. Score bottoms of tomatoes by slashing a small “x”, then carefully lower a few at a time into a pot of boiling water. Leave for 10 to 25 seconds, just until skins start to split, then plunge a bowl of ice water to cool. The skins should easily slip off. If your tomatoes are super firm, you may be able to get away with just a vegetable peeler. My favourite is the zyliss. The serrated edge grips the tomatoes without ripping them.

3. Seed This is optional, but I prefer to seed fresh tomatoes. When sauce is cooked with tomato seeds, it sometimes develops a bitter undertone. Canned tomato seeds don’t seem to have the same effect though, so when I’m feeling lazy, I don’t bother.

To seed fresh tomatoes, simply cut them in half lengthwise, then cut or squeeze out seeds. There’s no need to be a perfectionist about it – a few stragglers won’t make a difference. To seed canned tomatoes, carefully split them open with your hands and scrape out seeds.

4. Cook Now that you’re ready to go, try one of these deliciously saucy recipes: