If I had to pick one dish to eat forever, it would be French onion soup. Hands down. For me it’s the ultimate comfort food, reminiscent of post-ski day dinners as a kid and cozy bistro meals with my love 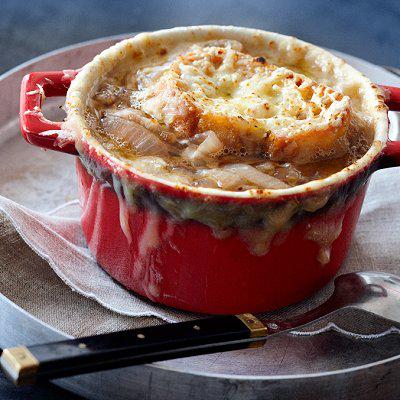 If I had to pick one dish to eat forever, it would be French onion soup. Hands down. For me it’s the ultimate comfort food, reminiscent of post-ski day dinners as a kid and cozy bistro meals with my love. Now I don’t have time to simmer onions or broth for up to three hours, nor am I making my own beef stock anytime soon. So Chatelaine’s Fabulous French onion soup was the perfect compromise – traditional taste in just over an hour.

The only downside to this recipe? The crying….from cutting the many (many) onions that give this meal its name. A kind someone did mention I could have used a food processor to slice the onion rings, but since we moved (seven months ago…) I actually can’t remember where I put it. So a cutting board and sharp knife it was. Eight onions later, I was cutting the final slices with tears streaming down my face as I tried to explain to mini sous chef why onions make us cry. Needless to say, she didn’t get it.

The onions are then caramelized by sprinkling them with sugar and cooking them down. Mine didn’t get quite as deeply browned as I hoped, but hungry tummies required me to move to the next step. Next time I would cook the onions longer, to get them as caramelized as possible.

Then you add the broth, wine (I used white because that’s what was open, but would try red next time), Dijon, and seasonings. After some simmering to help the flavours develop (about 30 minutes), the soup is ladled into oven safe bowls, topped with toasted and buttered baguette slices (you can do this while the broth simmers), covered with grated cheese (I used emmenthal, and lots of it), and broiled for a few minutes.

This soup didn’t disappoint. Well, chef-in-training was a little disappointed that his soup bowl was a tad on the small side. The only change I would make next time is based on our well-developed French onion soup taste buds – we like a saltier broth, so I would up the salt and make the broth the day ahead. We actually ate it two nights in a row (it makes a lot), and the second day the broth was even better. If only I could get rid of the tears…on that note, does anyone know a fail proof method for tearless onion cutting?