There are a few misconceptions about gravy out there, but it should be a simple formula: blend fat with flour, then add liquid 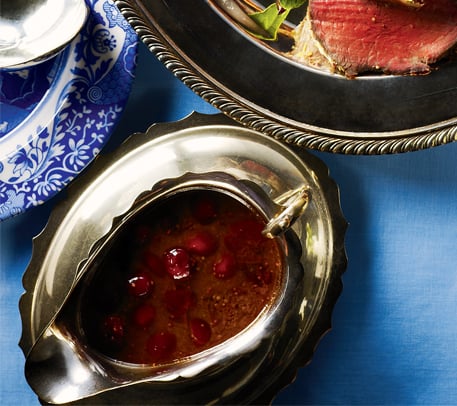 I’ll never forget the holiday I spent with my then-boyfriend’s family: his sister asked me to make gravy . . . then handed me a Mason jar. I was completely perplexed! Apparently she expected me to shake flour and water together in the jar.

Clearly there are a few misconceptions about gravy out there. But it should be a simple formula: blend fat with flour, then add liquid.

Gravy has to start with fat, usually the drippings from the roast you’ve just pulled out of your oven. Transfer the bird to a warm platter (and tent it with foil) and check out what’s left in the pan. Spoon out all but about ¼ cup of the fat, and leave any of the lovely browned bits in the pan. Put the pan over 2 burners if necessary to get the whole thing hot and then sprinkle in about ¼ cup all-purpose flour. Stir the flour into the fat until it’s completely incorporated and the mixture starts to sizzle a bit. Now whisk in a bit of white wine or turkey stock. Whisk in a little at a time, scraping up the brown bits and blending the liquid with the flour mixture very well. Now just cook it until the whole thing thickens and becomes gravy. Taste and season with salt and pepper.

If your gravy still doesn’t thicken, try this trick: mash about 2 tbsp soft butter with 2 tbsp flour in a bowl. Whisk in about ½ cup of the hot gravy until it’s smooth. Now pour the butter-flour-gravy mixture back into the big pan of gravy and whisk over medium heat until thickened.