How to make the perfect pan sauce

Learn the ABCs of sauce-making to get the most of those delicious drippings at the bottom of your roasting pan. 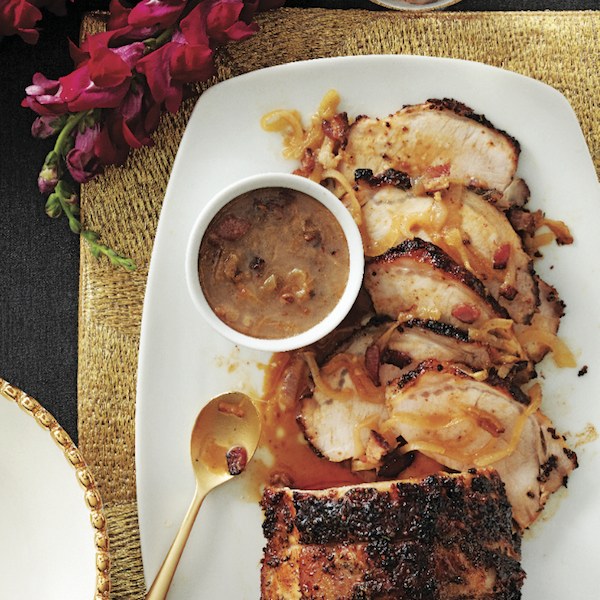 I’m not a winter person. I’m not good with anything slippery under my feet whether it be skates, skis, or icy sidewalks. The truth is I love heat, and since it’s scarce during a Canadian winter, my go-to source of it is to crank up the oven and get roasting. And as a bonus, I usually don’t fall down doing it.

There’s an art to roasting; It’s a dry-heat method of cooking that in most cases, produces a rich, caramelized outer crust and a tender, juicy centre. But roasting isn’t the focus of this post. Instead it’s the art of making a great pan sauce. A guide of how to make the most of those delicious drippings that fall to the bottom of your roasting pan.

The variations of sauces you can make with roast drippings are endless. However, the method to making them is quite standard. You can get creative and adjust for a sweeter, saltier, tangier or richer sauce, but the ABCs of making a pan sauce remain. Follow these steps with your next roast, whether it be a turkey, duck, pork, lamb or beef roast, and you’ll be impressed with what a great sauce you can make without a recipe. (And keep at it, because one thing is for sure when it comes to pan sauces: practice makes perfect.)

To make a great pan sauce you will ideally roast your meat on a rack, inserted into the same pan you intend to make the sauce in. This allows proper “dry-heat” roasting where a perfect crust is formed and the meat doesn’t sit in the liquids released from the protein. It also allows you to transfer the pan from the oven to the stovetop, making the most of every last dripping that hits the pan.

Once the roasting is done, skim the fat from the pan. (All of it. It can sometimes be difficult to determine which of the pan drippings are fat, and which are juices. The fat drippings are clear and will sit on top of the other pan juices. The juices (the wanted elements for your sauce) are of colour and are thinner in texture. Skimming fat can be tedious, however I feel it is the single most important element of sauce-making. Improperly skimmed sauces are greasy, with layer of fat that coats the sauce. If you have difficulty distinguishing the fat from the juices, try roasting your meat a day in advance. Chill your sauce allowing the fats to solidify (the juices will become gelatinous) and you can peel them off with a spoon and proceed with making the.

Deglaze with wine. Determine if you want your sauce to be red wine or white wine-based. Don’t panic, either will do – and both make great sauces. I tend to determine which wine I will used based on which wine I intend to serve with the meal. Transfer your pan to the stove top and bring to a simmer. If you don’t have enough drippings to boil, then just allow the pan to get very hot. Add wine and bring to boil. Here the wine adds a layer of flavour, as well as acting to help release all those yummy bits that are encrusted to the pan. Scrape them up, incorporating them into the sauce as it simmers down and has almost dissolved. Remember, brown bits equal flavour, and flavour is good!

Add the liquid. In general, I add 2 cups of stock (ideally homemade, but not necessary) to produce 1 cup of sauce. Bring the sauce to a boil and reduce until thickened enough to coat the back of a spoon, and generally yielding 1 cup.

Season at the end. Never salt or pepper a pan sauce until it has been reduced. The concentration of flavour from the roast, as well as how it has been seasoned will intensify as your sauce cooks. Season a sauce only in the finishing stages.

Flavour boosters: You can customize a sauce any way you like. Sometimes, portions of the stock will be substituted with additional wine or juices. Fresh herbs or spices can be added at any point to achieve a certain flavour profile.

Add thickening agent. The purist would argue that artificially thickening a sauce is discouraged, but they haven’t fed a family of 20 who all want a helping of gravy. If you are looking to make a “quantity” focussed sauce, chances are you will need a thickening component to counter the amount of stock required to make enough sauce. To do this, reserve a few tablespoons of fat that you have skimmed of your sauce, and heat that fat in the pan at the first stage of the process. Add 1/4 cup flour to the pan and cook, stirring in the fat until the flour is golden in colour. Add the wine and proceed with the recipe, doubling the amount of stock needed.

But, if you are making a small quantity of sauce but would prefer it to be slightly thicker (without reducing it any further), remove your sauce from the heat and immediately whisk in 1 tbsp of cold, unsalted butter. This should do the trick.