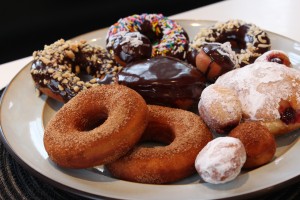 Let’s face it, we Canadians know our donuts. Whether we remember enjoying one with a steaming cup of hot chocolate as a child or still occasionally indulge in a Dutchie today, donuts are a fave Canadian guilty pleasure. Within the donut category, there can be a wide range of styles and varieties to choose from, but essentially all donuts are a form of fried dough. After that, donuts can be split into two categories: cake-like, dense donuts; or fluffy yeast-risen donuts.

While I have favourites in both categories, lighter, fluffier donuts are in fact my preference. With donuts being so incredibly hip at the moment – I had to put them, and myself to the test to see if they truly could fall under the DIY category. And, I’m happy to report that you can. In fact, the recipe for donut dough is very similar to brioche dough – tender and slightly sweet – so I used the easy recipe from our brioche in a can, with a few small changes.

STIR yeast with sugar and warm milk in the bowl of an electric stand mixer. Let sit for 10 min or until slightly frothy. Combine flour with salt in a large bowl.

MIX yeast mixture with paddle attachment at low speed for 1 min. Gradually add flour mixture while stirring, until combined, about 2 min. Replace paddle with dough hook attachment. Mix in eggs, yolks and butter until combined, scraping down when needed.  Increase speed to medium and mix 4 more min (stand mixer may move around the counter) or until dough has come away from the sides of the bowl and is smooth. Remove hook. Cover mixing bowl with a damp kitchen towel (not terry cloth) and let rise at room temperature until doubled in size, about 1 hour.

TURN out dough onto a lightly-floured surface and punch down. Roll until 1/4 in” thickness. Cut our 3″ circles and transfer to a lightly floured surface. Use a 1″ cutter to cut out the centres of the donuts if desired. Reserve these centres to cook separately. Cover rounds with plastic wrap and let rise for 30 more min. 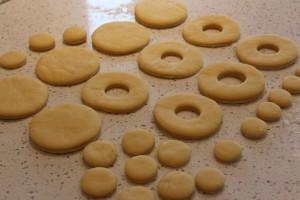 How to shape donuts

HEAT enough vegetable oil to reach 3″ depth in a heavy bottomed pot over high heat to 350F. Drop in like-sized donuts, a few at a time being sure not to crown the pot. Cook, flipping often to brown both sides until golden, about 2 min. Remove donuts to a paper towel-lined plate and repeat with remaining donuts. Let cool until warm enough to handle.

STIR sugar with cinnamon and pour onto a shallow plate. Roll warm donuts in cinnamon sugar until they are well coated. Cool or enjoy immediately.

Jelly donuts
My kids would not have forgiven me if I didn’t make some jelly donuts…and they’re actually very simple. Follow the above recipe, omitting the cinnamon sugar. Spoon your favourite jelly or jam (I used grape jelly) into a piping bag fitted with a #4 tip. Poke the tip into the donut and squeeze in the jelly. If you dough is to firm, use a skewer or thin knife to get the whole started and then fill with jam. Roll in icing sugar. Shake of excess and enjoy.

Chocolate-dipped + toppings
Whip up a batch of our dark chocolate ganache and you’re steps away from load of variations. Once your ganache is made, let it cool until it slightly thickened – but not hard (ribbon stage). Pour the mixture into a bowl that’s just larger than the size of the donut. To transform them into chocolate-dipped donuts, dip the top half of each donut only, then transfer them to a wire rack where they can firm up. If you want to add a topping (chopped peanuts, cashews, toasted sweetened flaked coconut, sprinkles chopped cookies…this list never ends) then be sure to do so before the chocolate hardens.