I love making soups. They’re comforting, easy, and can often be whipped up with ingredients you have in the fridge and pantry. This soup was all those things, plus it was made in one pot 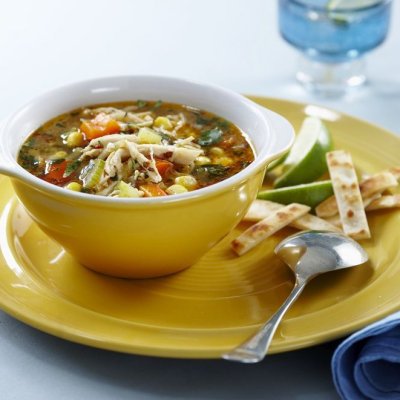 This past week was a busy one, which meant Grammy was in town to look after mini sous chef one evening. Now my mom, as I’ve mentioned, is an amazing cook. But I don’t think she should have to play chef at my house, especially when she’s the (unpaid) babysitter. So I hit Chatelaine’s recipe archives, looking for a fast, healthy and tasty meal…that could be made with the ingredients in my fridge. Hello, cilantro-lime chicken soup!

I love making soups. They’re comforting, easy, and can often be whipped up with ingredients you have in the fridge and pantry. This soup was all those things, plus it was made in one pot…which meant fewer dishes, and therefore, a happy chef.

The first step was to make the crispy tortilla strips to sprinkle on top of the soup. Best tip I have to make easy strips is to use a pizza cutter and run it down the length of the tortilla. Fast and effective. After the tortilla strips are crisped up in the pot (use a big one) and removed, you add a little more oil and cook the leeks until soft. In goes the peppers (I used orange bell peppers, as the recipe didn’t specify) and celery, and they cook until they caramelize. This was the only stumbling block for me: I have learned through my recipe experiments that I have NO idea how to tell if a veggie has caramelized properly (Is it the colour? Texture?). So I cooked them for the suggested 12 minutes, and moved on.

Once the veggies are done you add the water and spices, and let it boil before crumbling in a bouillon cube. I used a veggie bouillon cube (no salt or MSG) and replaced 1 cup of the water with chicken broth. After boiling, the uncooked chicken goes in and simmers until it’s cooked through, which only took about six minutes. Then the chicken gets shredded and added back to the soup, along with the corn, cilantro and lime juice, and a few minutes of simmering later you’re ready to eat.

I served the soup with some baked tortilla and cream cheese pinwheels (because chef in training views soup more as an appetizer than a meal), but it really was filling on its own. And the cilantro-lime combo made it a great spring soup, versus some of the heartier soups best suited to snow-filled days. It can also go in the freezer for a month, so I would double the recipe next time so we’re prepped for another busy night, or a visit from Grammy.