Now that I have a wee one, and there are plenty of holiday play dates, potlucks, and other get togethers, seems like it’s as good a time as any to make cookies almost too pretty to eat. 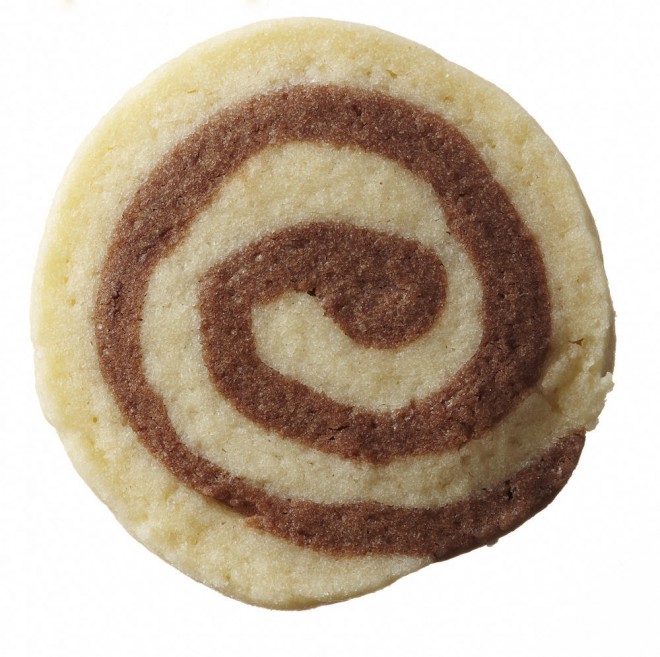 I’ve never participated in a cookie exchange. I’ve been asked, but somehow the prospect of making DOZENS of cookies in the midst of holiday craziness seemed, well, crazy. But now that I have a wee one, and there are plenty of holiday play dates, potlucks, and other get togethers, seems like it’s as good a time as any to make cookies almost too pretty to eat. And Chatelaine’s chocolate pinwheels, from the holiday 100+ best recipes book, are certainly the prettiest cookies I’ve ever made (even the mini sous chef said so).

The trick with these cookies is to make sure you have enough butter on hand. They need a full cup (for 48 cookies). Plus, you need to factor in the chilling time, which is at least three hours. And finally, double check your cocoa supply – I was certain I had an entire tin (cocoa is one of those things that lasts forever, right?) but midway through cookie making I realized I had only a sprinkle left. Thank goodness for friendly neighbours!

Once the ingredients are under control the cookies are pretty basic. After the dough forms you divide it into two balls and knead cocoa into one until the colour is even. As a side note, be prepared to console your own mini sous chef after he or she taste tests the cocoa powder. It’s a sad day when you realize cocoa tastes NOTHING like chocolate. The vanilla and chocolate dough balls are then divided once more, so you have four balls of dough. At this point the dough goes in the fridge for chilling until it’s firm enough to roll.

Now here’s where you can learn from my mistakes. One, I left the dough in the fridge for three days – oops. But not a problem, according to the recipe. However, it did make the dough super firm and because I didn’t let it warm up long enough, rolling was practically an Olympic event. Second, don’t do the rolling with a “helper”: getting the sheets of dough the same thickness is challenging enough alone, especially if you’re type “A” like me.

But as I said, these turned out to be the prettiest cookies. With the vanilla and chocolate swirl, they look impressive and taste delicious. And they freeze perfectly. My little taste tester even prefers them straight out of the freezer. Now I just need to get myself invited to a cookie exchange…

FILED UNDER: baking Cooking with Karma