We received a sneak-peak of this new meaty club by way of a box containing tasty items from Italy, Spain and Quebec. 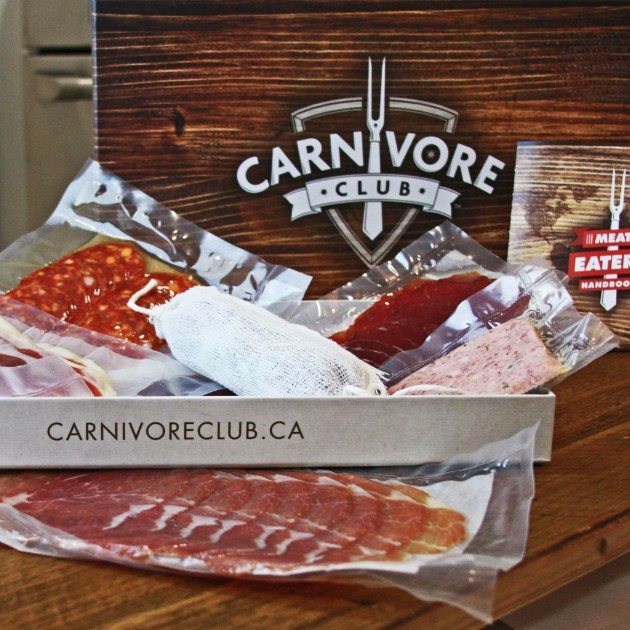 For those seeking out the finest in cured, aged or specialty charcuterie, there’s a tasty new club in town. The Carnivore Club is a new venture operating out of Toronto that’s just launched a meat-of-the-month club experience! Their campaign is currently crowd-sourcing pledges through Indiegogo.com offering a variety of packages. For $50 they are offering a “Premier Carnivore Club Box,” a one-month sample, all the way to “King or Queen Carnivore,” a years’ membership plus bonus items, for those pledging $500 or more!

Company co-founders and “foodie entrepreneurs” Tim Ray and Matthew Cloutier promise that for $50 a month, “members will receive a packed box filled with unique charcuterie, exotic terrines and locally crafted jerky from around the world straight to their doorstep.”

At Chatelaine we received a sneak-peek by way of a gorgeous faux wood box containing a descriptive guide and six items from Italy, Spain and Quebec, to create a dreamy charcuterie board tasting session.

From Spain, we enjoyed two incarnations of Iberian Ham, arguably the best cured ham in the world. First up, the classic Pata Negra, or Black Foot Iberico cured ham. Deliciously complex, this ham is unlike any other that we’ve tasted. It has an almost aged cheese-like flavour that, as far as we’re concerned, puts prosciutto to shame. Next we tasted Iberico Chorizo, produced from the same Iberian pigs as the Pata Negra. This air-dried sausage was rich and salty and brightly coloured with paprika paste and garden peppers.

Then we were taken to Italy, as we enjoyed some fine Bresaola, beef that has been rubbed with spices, salt-cured and air-dried. Moving on to Culatello, the famous Italian cured ham that hangs in caves “not far from Parma” for 12 months, this was another salty treat that also had great depth of flavour. This was followed by Toscana Salami A Finocchio, a traditional Tuscan-style sausage spiced with fennel seeds and described as a “rare-salami produced by local artisan producers.” 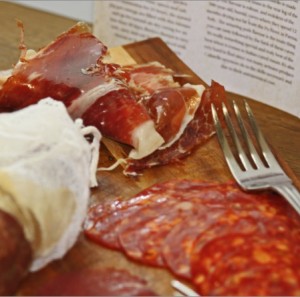 To top off the tasting, we sampled Pâté De Campagne, a traditional Quebecois pâté. Rich and delicious, the chunky pork spread was spiced with black peppercorns, wild mushrooms and white wine. Though we were intimidated by the look of it at first, we were pleasantly surprised by the immense flavour and richness.

In the end we all agree that the Carnivore Club is an awesome idea that would be perfect for foodie groups or as a memorable gift. In the months to come the club promises other rare treats such as bison jerky, five-game terrine and duck breast prosciutto, which, after this tasting, we’re all anxious to try!