We made our own ice cream with Belly Ice Cream Co.

Pumpkin-spice is staging a fall takeover — it’s already found a home in our coffee and baking — and now it’s in our ice cream, too. 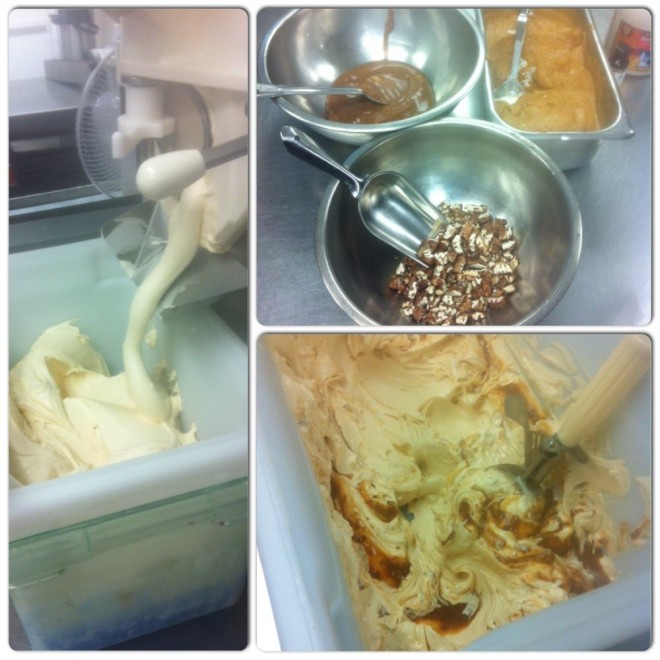 Mixing up our own pumpkin ice cream, with a few special ingredients!

While the double-scoop cone may be the superstar of summer’s cones, at this time of year it’s perfect á la mode. After all, what’s a slice of warm pie without a cooling scoop?

With an eye out for seasonal flavours, I stopped by Belly Ice Cream’s kitchen in Muskoka where the company’s creator, Shelley Westgarth, let me help her whip up some magic. Digging into some of their unique and popular flavours (ranging from Mocha Maple, to Saigon Cinnamon and Basil Gelato) triggered some sweet inspiration.

Starting with pumpkin cheesecake ice cream (yum!), we added candied pecans, maple syrup and a feuilletine-laced caramel swirl. We whisked (and tasted), drizzled (and tasted), and mixed our triple-tasted ice cream. Scooping it into pint containers, it went into the freezer to set. (Only then did I momentarily stop tasting.) 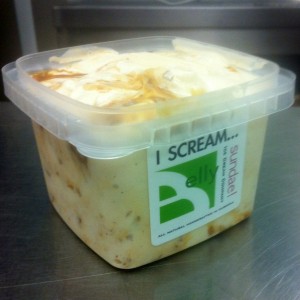 Shelley told me Belly Ice Cream was an idea she had when she was pregnant in 2009 (hence the name). At the time, she worked as a chef at Deerhurst Resort in Huntsville, ON. “I went in [to work] three days later, quit my job and was up and running in three weeks. No business plan, no money — just did it!” she laughs. Lucky for us, her plan worked out, and though she may have left her job there, she never left the resort property — her kitchen is still located at Deerhurst, and as a big supporter of sourcing food locally, the resort offers Belly Ice Cream on their restaurant’s menus.

Constantly creating new flavours with local ingredients (her honey comes from a local apiary at Deerhurst, run by “Poppa Jim”, a charming beekeeper), Shelley is currently working on two particularly special ones, which she’ll be taking to the Oscars this February. That’s right, A-listers like George Clooney and friends will be licking up Belly Ice Cream’s ‘Red Carpet’ (raspberry-chocolate truffle), and ‘And The Winner Is…’ (champagne with gold flakes).

As for us D-listers, Belly Ice Cream is available across Ontario, including select Whole Foods, and will be at the Delicious Food Show in Toronto, running October 25 — 27.