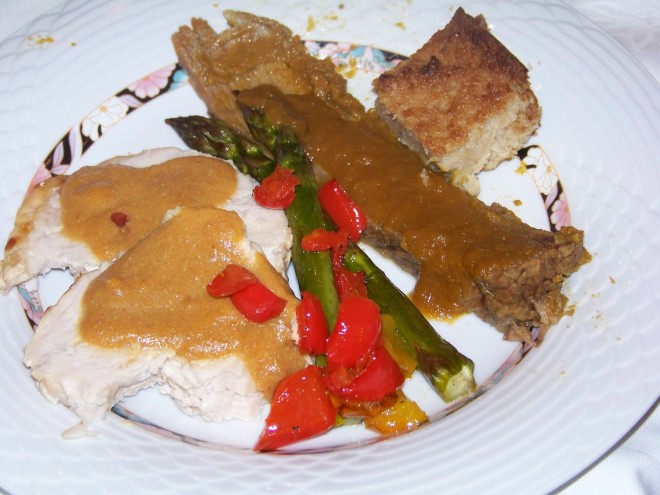 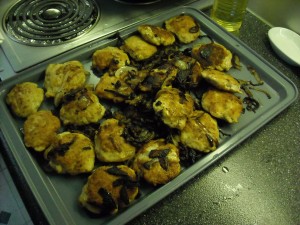 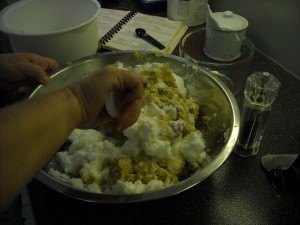 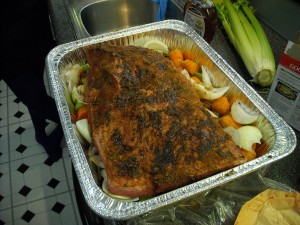 Last week I had my first Seder dinner, with my roommate Jenn Goldberg’s family. couple of days before the big meal, we helped her mom, Ferne, prepare the brisket, farfel and kugel. Take a look.

The brisket was rubbed with a mixture of maple syrup and spices then roasted over chunks of celery, carrots and onions. After the meat was cooked Ferne pureed the veggies to create a thick gravy. It was very tasty and also a clever way to thicken the gravy (flour isn’t allowed in Passover cooking).

Here are the farfel and the kugel – both side dishes. The farfel was made from a mixture of onions and mushrooms and folded into beaten egg whites. Kugel is a baked potato onion dish. They were both super yummy.

Steven, Ferne’s cousin, brought the gefilte fish. (Gefilte fish are fish patties made with egg, onions and matzo meal.) I’ve had it before but this was the tastiest by far, probably because it was fried. Everything fried tastes better, doesn’t it?

Here’s the dinner Seder dinner plate. I had heard that Passover meals can be flavourless ‘ due to the food restrictions ‘ but this one proved to be anything but. Thank you to the Goldbergs, for having me over for Seder dinner.