Make a savoury pancake for brunch, lunch or dinner

Take a culinary trip to Japan with this easy and delicious recipe. Our Okonomiyaki recipe is inspired by a traditional savoury pancake dish that originated in Japan. 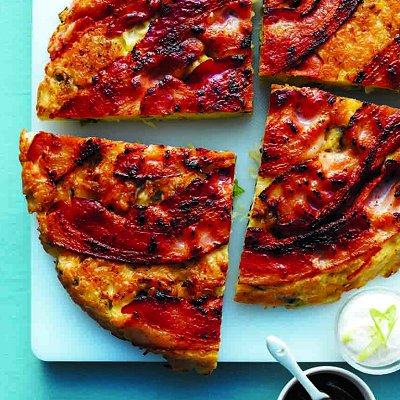 One of my favourite Fast Food recipes we have developed in The Chatelaine Kitchen is in December issue of the magazine. Our Japanese Bacon Okonomiyaki recipe is inspired by a traditional savoury pancake dish that originated in Osaka, Japan. Okonomi means “as you like” and yaki means “grilled or cooked,” which speaks to this dish as you can mix and match ingredients whichever way you like.

The first time I had okonomiyaki was in London, England. Most okonomiyaki restaurants are grill-it-yourself establishments, where a server brings bowls of raw ingredients that the customer mixes and cooks on a flat griddle. The restaurant I visited had a diner-style counter where the cook actually prepared the okonomiyaki in front of me.

Chatelaine’s version of the okonomiyaki is a little bit more user-friendly for the home cook. This recipe went through numerous tests and transformations before we hit the okono-jackpot. Initially, we were pan-frying four individual pancakes, but found they were taking much too long with one pan and a 15 minute cooking time per pancake. We tried to cut down on the prep time by substituting with ready-made pancake batter, but it ended up giving it an oddly sweet flavour. We then decided to bake it like a frittata, but our original batter didn’t work in the oven because it came out too dry and gummy.

Various tweaks (and weeks) later, we finally perfected our okonomiyaki recipe, and couldn’t wait to share it with all of you! We’ve also developed recipes for the two traditional sauces that accompany the okonomiyaki – a sweet Worcestershire-flavoured sauce and a lemony mayonnaise.  You’ll notice in the picture above that these are normally drizzled on the pancake, but you can serve it on the side as well.

We hope you enjoy this recipe as much as we enjoyed developing it!!