Kitchen Musings : Back from the road

Our food editor, Claire Tansey, has returned home from a whirlwind cookbook promotional tour across Canada! Check out what she's been up to. 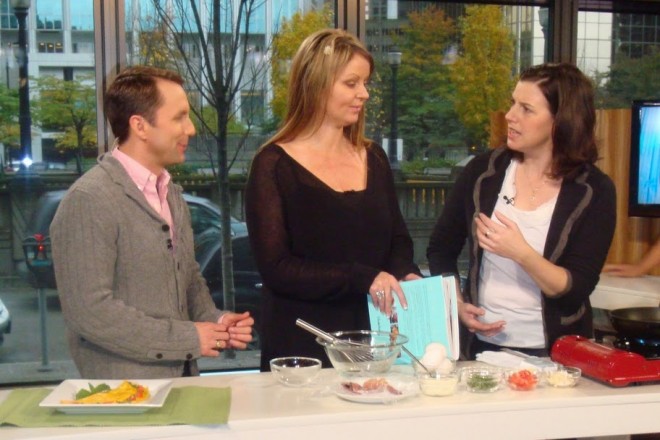 Four cities, 8 tv shows, 21 radio interviews and countless new friends made — all in one week that I spent crossing Canada showing off Chatelaine Modern Classics. It started in Vancouver at Breakfast TV, Barbara-Jo’s Books to Cooks, Urban Rush, and Caren McSherry’s Gourmet Warehouse. We hosted a cocktail party on the 56th floor of Vancouver’s gorgeous Shangri-La Hotel, followed by a riotously fun dinner at MARKET, where our recipes co-starred with chef Karen Gin’s sophisticated dishes. It was a great gathering of foodie women, so no surprise that the laughter and chatting went late into the night.

In Calgary the brave hosts of Breakfast TV tasted insects in the segment right before mine. Maybe that’s why they loved our crepes with creamy crab sauce so much! We ate like kings at Zyn the Wine Market, courtesy of Rouge Restaurant (still beaming after their recent naming to the Top 100 Restaurants in the World). Montreal was a whirlwind that ended up at the lovely Appetite for Books (complete with chocolate pudding and chipotle cheddar crisps). And in Ottawa I got to hang out with the morning crew on EZ Rock — wow, what a job at such an early hour!

It was a thrill to meet some extraordinary foodies across the country — Erin Ireland and Coleen Christie in Vancouver; Julie Van Rosendaal and Paul Rogalski in Calgary; Jonathan Cheung and Michelle York in Montreal (as well as my dad and aunt, who “mmm-ed” whenever I mentioned something delicious), Pam Collacott in Ottawa, and so many more.

Best of all, it’s been so fun to share the new cookbook and to wax poetic about our vision for Chatelaine food (really, don’t get me started, I can’t stop!). I recruited a ton of eager home cooks to join our recipe testing program, got some great ideas for new recipes, and ate some very tasty things. Glad to be home, though, and back in the Kitchen.