Grab a can of coconut milk and get ready to make the best whipped cream. Yum! 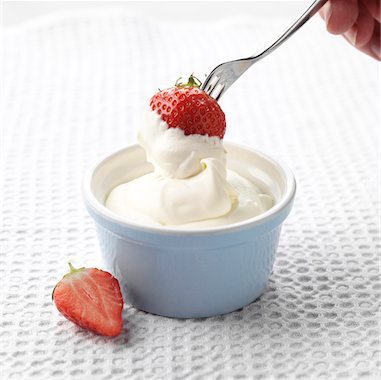 They say necessity is the mother of invention. Last fall, I enrolled my 3-year-old son at a preschool attended by a child with a severe dairy allergy. This made packing his lunch quite tricky. My usual suspects of cream cheese and cucumber sandwiches, cheese and crackers and yogurt, were now all out the window. So I started doing research to find some suitable dairy-free alternatives. One I stumbled upon was whipped coconut milk as a substitute for whipped cream. How ingenious! I gave it a try, and since then have come to love it. I use it often, and not just for dairy-free desserts.

Directions
1. Refrigerate a 400ml can of full-fat coconut milk overnight. (Reduced fat doesn’t have enough fat to solidify, I tried it – don’t bother).
2. Scoop the solidified milk into a medium bowl. You can also strain it if you find it easier – but you don’t want any liquid.
3. Discard the liquid or keep it for another use.
4. Using an electric mixer, beat the coconut milk on medium-high until smooth. Add 2 tbsp icing sugar and continue beating until the milk is fluffy, resembling the soft-peak stage of whipped cream.
5. Use it however you like!

One 400 ml can yields about 3/4 whipped coconut cream, so if you’re hoping for a big batch…make two!

Results
So, does it taste like coconut? Of course it does! In the most charming and elegant way. The texture is somewhere between creme fraiche and whipped cream, and the flavour is unexpected and wonderful. It seems almost a bonus that it’s dairy-free and vegan, because frankly it’s virtuous enough without that. Use it in any application that you would use soft-peak whipped cream. It doesn’t hold its form as well as firm whipped cream, so it isn’t suitable if you’re hoping for structure in a dessert.

Variations
My two favourite switch-ups include adding some citrus or chocolate:
Citrus: Whip the zest of one lime into the coconut cream, along with the sugar.
Chocolate: Add an additional tbsp of icing sugar, as well as 1 tbsp cocoa powder and 1/4 tsp vanilla.

Recipes
Although not vegan or dairy-free, these Chatelaine Kitchen recipes are great candidates for the coconut cream swap:
Fresh basil and strawberry meringues
Cake toast with honeyed strawberries
Strawberry-rhubarb pie (add a dollop on top)

FILED UNDER: coconut milk dessert In the Kitchen whipped cream