How to make a perfect hasselback potato

A golden, roasted potato never goes out of style — but these special spuds add a little something extra to a traditional side dish. 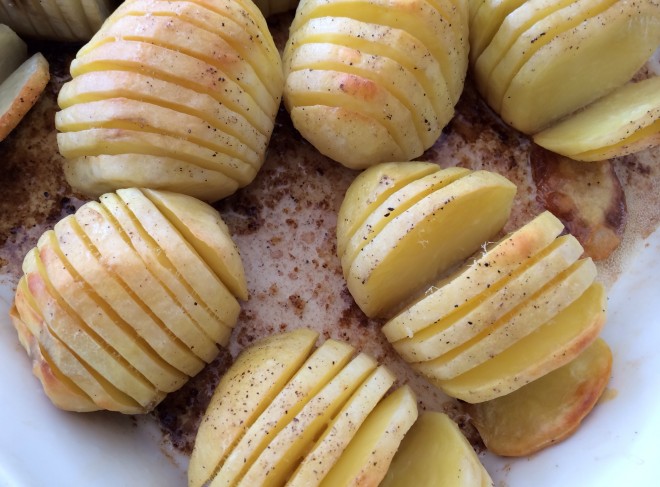 Hasselback potatoes are peeled, roasted potatoes, cut into thin slices with the base left intact. When they bake, these thin slices crisp up and begin to separate, creating an impressive-looking dish. They might look like they are difficult to make, but in fact, they’re incredibly simple.

I tested this method with russets, Yukon golds and red potatoes; by far, the golden potatoes had the best result. The numerous slices in hasselback potatoes create a lot of surface area and exposure to air.  As a result, the russets tended to oxidize and turn black quickly. The reds were fairly good, but the golden potatoes crisped up the best, maintaining the best texture when cooked. And since you want these potatoes to have a particular look, be sure to look for ones that have a smooth texture and football-like shape.

Below is a basic method for making hasselbacks, but there are many possible variations; such as placing herbs between the slices or adding crushed garlic to the butter. You can also top with parmesan (or another cheese) for the last 10 minutes of baking. Here’s how to make them:

More:
20 inventive ways to use a can of beans
14 tips for using your slowcooker this winter
11 best tips for big-batch cooking