Drinking this flavour-rich stock straight up is one of the hottest new trends of 2015. Wary of substituting it for your afternoon caffeine hit? Don't worry – it also makes really good soup. 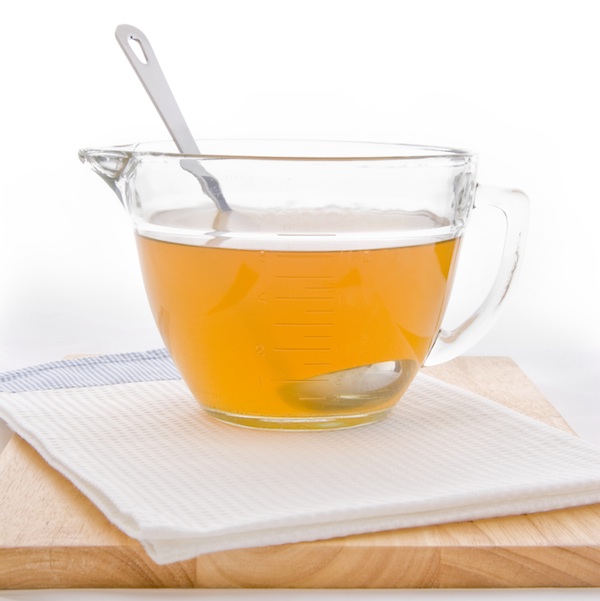 Okay everyone, it’s time to empty out the past-due vegetables in your crisper, simmer them in a pot with some bones and set up a bone broth stand at the end of your driveway. If it ever occurred to you that ‘stock’ – the concoction you’ve been making for years – could be saleable (and even pricey), then you were right! One of the hottest things going these days on the food scene is cozy cups of bone broth (a.k.a. stock). For sale.

So what is bone broth? And how does it differ from the stock you’ve been making for years?
There are a few simple but distinguishable factors. First, the ratio of bones to water is much higher, resulting in a higher concentration of collagen, amino acids and minerals in the liquid. Once bones are added to the pot, only enough water to cover the bones by 3 to 4 inches is added.

Second is the way and length of time in which the broth is cooked. A typical stock simmers anywhere from 2 to 6 hours (depending on the bone) whereas a bone broth is simmered at a very low heat for a minimum of 6 hours, all the way up to 16 hours.

Third, while stocks are made with bones and aromatics, bone broths include a percentage of bone-in meat, intensifying the flavour of the broth. The ratio of bone-in meat (inexpensive cuts such as shank or short rib) to straight up bones is 2:1. Therefore, for every 2 lbs of bone-in meat, there is 1 lb of bones. Joint bones are often sought after for bone broths for their high levels of collagen.

Finally, while some bone broths are a single flavour (ie. beef or chicken), most bone broths use a variety of bones to develop a richer flavour.

Why is bone broth suddenly so popular?
The main explanation for the sudden obsession with bone broth is the paleo diet. Put briefly, it’s a diet that consists of consuming only natural foods that would have been available to our ancestors. And by ancestors I’m referring to the hunter-gatherer era of our ancestry. They would have used every element of the animals consumed, which would have included cooking down the bones to extract every last nutrient from the animal.

I also see this trend being a natural extension of the ‘nose to tail’ phenomenon. Many chefs and socially aware consumers have become focused on the consumption of the entire animal; this has resulted in previously underutilized parts of the animal (specifically offal) appearing on so many restaurant menus. While broth itself is a rudimentary element of cooking, I see its popularity to be an extension of this.

Aside from the differences laid out above, bone broths include many of the same ingredients used in making basic stock. It should be noted that the purpose of making bone broth is to extract as much nutrition as possible from the bones. Therefore the bones that you use are very important. Ideally, high quality farm-raised bones are used to make this broth (when available). Some recipes call for the bones to be roasted before simmering to build extra flavour. If you’re in a hurry (to make your 20-hour bone broth), this step can be skipped. Recipes also call for the addition of acid – such as tomato or vinegar – to help break down the tougher meat fibres. Personally, I feel the duration of the simmering does this sufficiently, but that said, the acid can add a layer of flavour to the broth. If you’re interested in adding an acid to the recipe below, I would suggest 3 tbsp – and it should be added with the bones to the pot and simmered.

Here I have adapted the Chatelaine’s homemade chicken broth recipe and converted it to a bone broth. Pour in a cozy mug and sip away.