We took the food trend du jour and one-upped it into a bite-sized treat for the Canadian snack food hedonist. 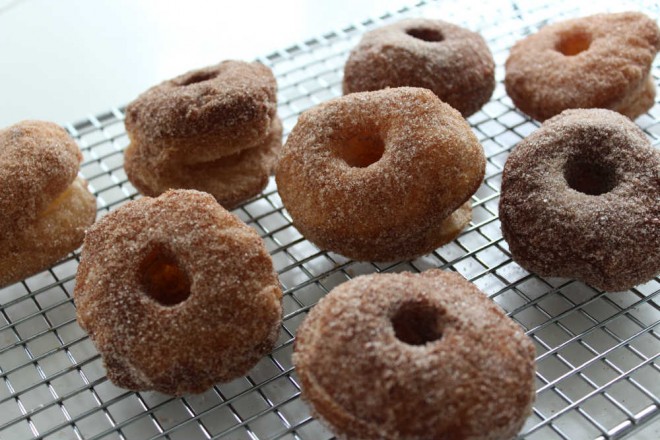 A rich, buttery round of deep-fried flakey dough topped with icing or coated with sugar? Yes, please!! I’m referring, of course,  to the now infamous cronut, hybrid pastry developed this year (and trademarked) at Dominique Ansel Bakery in New York City. Since hitting the scene, these little beauties have garnered frenzied tweeting and hours-long lineups.

So what’s all the hubbub about? A true cronut dough is a hybrid dough — crossing a croissant pastry with a donut dough. I’ve taken away the hours and stages of rolling and chilling puff pastry, as well as the proofing of the donut dough, and created a cheater (but stellar) version. Having been lucky enough to try an actual cronut, I can tell you these cronuts are slightly different, without the chewy-tender bite of a yeast dough. However, if you are looking to save your self a trip to NYC, and $40, I think you’ll find them darn delicious!

COMBINE sugar and cinnamon in a medium bowl. Spread onto a plate and set aside.

UNROLL one pastry square on a  flat surface. Brush 1/3 with melted butter. Fold that third over, leaving 1/3 exposed (like you are folding a letter). Brush the top of the double layer of pastry with butter. Fold remaining layer over. You should be left with a 3 layer rectangle. Press very gently — enough to seal, but not to flatten the layers. Chill long enough to let butter firm up, about 30 min. Repeat with second pastry roll.

POUR enough oil into a medium saucepan to reach 1 inch in depth. Heat to 350F.

REMOVE dough from fridge and using a 21/2 cutter, cut out four rounds. Cut out a hole in the centre (I used the small end of a #9 piping tip and it was the right size.) Drop thee cronuts into the oil (don’t crowd the pot) and cook until the underside appears deep golden brown, 1 to 2 min. Flip and continue cooking until the whole cronut is deep golden. As it cooks, the cronut will puff up and rise…it’s fun to watch!

REMOVE to a wire rack and cool very shortly, only until it is cool enough that it can be handled. Roll in cinnamon sugar and return to wire rack. Repeat with remaining dough. 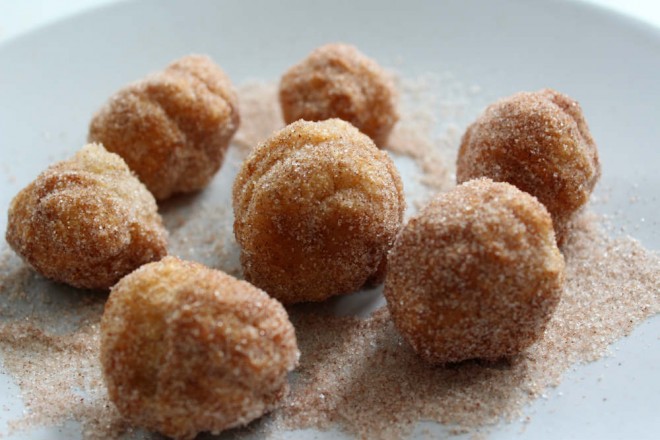 The scraps of dough left over can’t be rerolled to from more cronuts, puff pastry just doesn’t ‘roll; that way (ha ha). There’s a fair amount of scrap dough left over, so I thought what better a way to make use of the scrap dough, and give a ‘tip of the cap’ to us Canadians, then to make some crimbits?!

To make them, roll up scrap dough into small balls and follow the frying and finishing steps above.

Variations: Two of my favourite cronuts are the salted caramel and chocolate dip.

Salted caramel cronut: Complete the recipe directions above. Then, melt 250g small square caramels over a water bath with 1 tsp of water and 1/2 tsp salt. Stirr often until melted. Spread over the cronut or dip the top of the cronut into the caramel.

Chocolate dip cronut: Complete the recipe directions above. Then make one batch of the Chatelaine Kitchen’s dark chocolate ganache and spread it generously over the cronut.