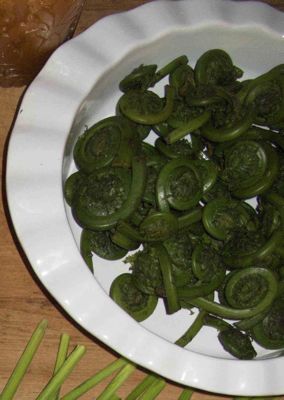 Springtime produce is here. I picked up some Ontario fiddleheads at the St. Lawrence Market on the weekend. I love fiddleheads… But I have to admit I hate cleaning them. Their delicous flavour and crunch make it worth the extra work. What’s the best way to clean fiddleheads? Trim their tough ends, then soak in a large bowl of cold water. Scoop them from the top of the water because probably most of the dirt has settled to the bottom. Give them another good rinse. They’re great sauteed in butter and garlic or added to a pasta dish. I made a tasty carbonara with fiddleheads and asparagus. I’ll include the recipe in my next post.

Interesting fact: Where do fiddleheads get their name? Fiddleheads are named after the spiral part of a violin/fiddle. Cute! These curlycues are actually called Fiddlehead ferns because they are the first shoots of a fern tree. They are curled and tender for the first two weeks before they unfurl into a tree.