Celebrate Passover with food and family

Our web editor, Grace, shares with us some of the dining traditions her family celebrates during Passover. 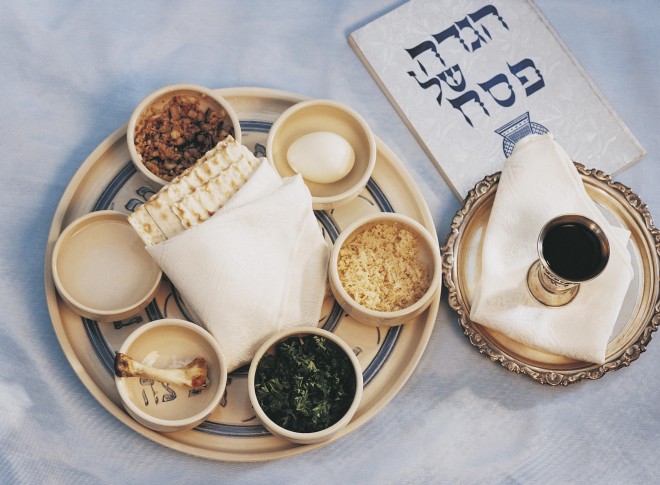 April 18 marks the first day of Passover, an 8-day festival celebrating the Israelites’ freedom from slavery in ancient Egypt. As with many holidays, Passover is defined by food – and lots of it! By following some of the dining rituals of Passover, those who are celebrating gain an understanding of the suffering and subsequent freedom that their Jewish ancestors experienced. Our web editor, Grace, shares with us some of the dining traditions her family celebrates during this time:

1. The first night of Passover is celebrated with a big family dinner. A Passover plate is served at this time, with 6 ingredients symbolizing the Israelites’ passage of freedom, including:
*Maror and chazeret – Bitter herbs symbolizing the bitterness and harshness of slavery.
*Charoset – A mixture of nuts, dates, apples, cinnamon and wine representing the mortar used by the Jewish slaves to build the storehouses of Egypt.
*Karpas – a vegetable dipped into salt water to symbolise tears shed and the pain felt by the Jewish slaves.
*Z’roa – traditionally a roasted lamb or goat shankbone representing the Paschal lamb offered as the Passover sacrifice in the Temple In Jerusalem. The z’roa only serves as a visual reminder of the sacrifice; it is not eaten or handled during the dinner.
*Beitzah – a hard boiled egg symbolizing the festival sacrifice that was offered in the Temple in Jerusalem.
2. The Passover dinner is intertwined with story-telling and songs of the Haggadah, the story of Exodus from Egypt – a great way for children to learn the story of Passover!
3. To symbolize the haste in which the Israelites fled Egypt, no leavened grains are consumed. This includes bread, cookies, cakes and other foods.
4. Matzoh, a flat unleavened bread resembling and tasting like a giant cracker, is heavily eaten during Passover in place of bread. Matzoh can be used in many recipes including Matzoh ball soup.
For those of you who are celebrating Passover this week, here are some recipe ideas:
Asparagus and smoked salmon salad with chive vinaigrette
Smoked trout-and-orange salad
Baby potato and smoked salmon bites
Lacy-edged latkes
Gefilte fish
Harvest cabbage rolls
Tender beef brisket
Chocolate crater cake
Chocolate hazelnut mousse cake
Frozen lemon meringue cake
FILED UNDER: In the Kitchen Passover