To baste or not to baste? Find out when to use what sauce, and how, here. 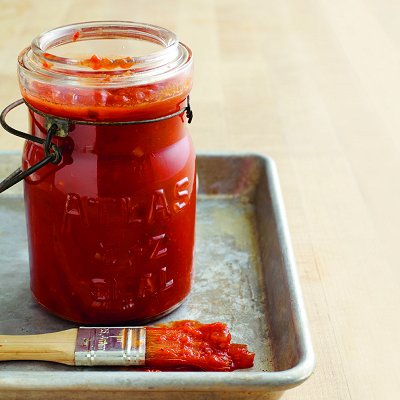 No summer cookout is complete without a flavourful barbecue sauce. But not all barbecue sauces are the sweet and sticky kind; there are hundreds of varieties that vary from region to region, but you’ll find that the most common types start with three different bases: tomato, mustard or vinegar.

A good barbecue sauce should complement (not overpower) the smoky flavours of barbecue favourites like ribs, brisket and chicken. It should also be well balanced, with a bit of sweetness and a hit of tang from the acidity, depending on the style of sauce. Here’s a quick guide to the three of the most well known varieties of barbecue sauce:

Tomato-based
Tomato-based barbecue sauce is probably the most familiar, as there are hundreds of bottled varieties available on the market. They often come in two styles, with either a tomato and vinegar base or a tomato and sugar base.

Barbecue sauce with tomato and vinegar is thinner, often used as a basting liquid during cooking. Tomato and sugar sauces are typically sweetened with brown sugar or molasses and used as a finishing sauce (the sugars can burn easily if added too early in the cooking process).

Like to make your own BBQ sauce? Try our classic sweet and spicy version.

When to use it
Tomato-vinegar based sauce: This sauce is used as a basting liquid throughout the cooking process, often on a whole hog or pork shoulder – start basting one to two hours before cooking is done. Most often, you’ll find this sauce used for pulled pork where it is mixed in at the end for a tangy sandwich.

Tomato-sugar based sauce: This sweet sauce can burn quickly and become gummy which means that it is best applied at the end of cooking (this allows it to heat up without burning). Baste with this sauce 8-10 minutes before cooking is done and remember to flip the meat frequently to prevent burning. This variety works best as a flavourful finishing sauce for ribs and chicken.

And remember, less is more. For 2 kg of pork back ribs you’ll need about 1 1/2 cups of sauce. Give it a try with our classic pork back ribs.

Mustard-based
This sauce is made up of a mixture of yellow mustard, vinegar and seasonings like Worcestershire sauce and black pepper. This is the famous barbecue sauce from South Carolina and is often served on the side of a whole spit-roasted pig. This tangy sauce compliments the smoky flavour and cuts through the fat of pulled pork.

When to use it
Mustard-based sauce is typically more of a finishing sauce that does not require cooking. It gets more flavourful with an overnight resting period, so mix up this sauce a day in advance. While frequently paired with pork dishes, this sauce also works well with chicken.

Vinegar-based
A vinegar-based sauce is a tangy, spicy and thin sauce that is used to cut through fat of traditional barbecue. Like a vinegar and tomato-based barbecue sauce, this zippy sauce is used as more of a basting liquid throughout the grilling process. It is often a simple combination of just two ingredients; cider or white vinegar and red pepper flakes for some added kick, however some recipes may call for a bit of sugar.

When to use it
As the acidity is incredibly powerful, this kind of barbecue sauce should be used throughout the cooking process or in small amounts on fatty cuts of pork like pork shoulder. This sauce can be used to baste the meat during the cooking process; it can be applied every 20 minutes for 1 to 2 hours before meat is finished. For traditional pulled pork, it is often mixed in at the end with shredded, slow-cooked pork shoulder.

Related:
How to cook ribs on the grill
5 ribs recipes for summer
Barbecue menu for eight

FILED UNDER: The Kitchen Apprentice