In our delicious soups and breads story in the February issue, we feature a smoky corn chowder with bacon soup 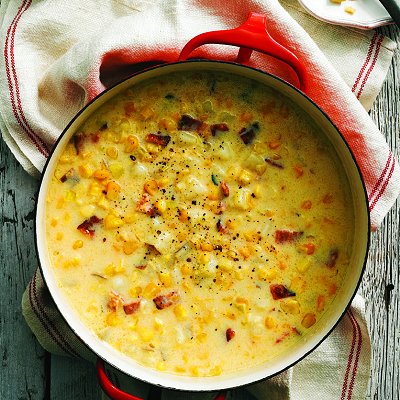 Back when I was in university and living in residence, I had a habit of eating creamed corn straight out of the can. Yes, I realize some people will find this gross, but there was something I found really comforting about the taste and texture of creamed corn even when eaten cold. I’ve asked around and creamed corn falls under the category of love it or hate it. On which side do you stand?

These days, I’m a little more refined and I prefer using creamed corn in recipes rather than on its own. For example, in our soups and breads story in the February issue of the magazine, we feature a smoky corn chowder with bacon. In an effort to cut the fat, we tried using creamed corn instead of cream, to thicken the soup – and it was a success! The soup is deliciously creamy and heartwarming. Pair it with our No-knead bread with bran, the easiest bread you’ll ever make and you’ll have the perfect remedy for a wintry day.