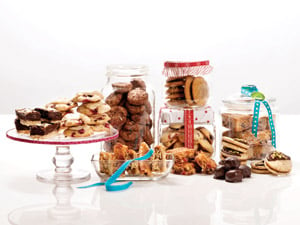 Four years ago, Sandra Armitage’s family welcomed Ev Zschaeckel, a German exchange student, into their rural Manitoba home. Ev brought along this family recipe and helped Sandra translate it into English. At first, the cookies proved problematic – some of the ingredients just couldn’t be found – but when a German acquaintance suggested using Nutella in the filling, the recipe fell into place. Ev has since returned to Germany, but her delectable sandwich cookies remain a favourite among the Armitages, who make them not only for Christmas but for all variety of special occasions.

Anita Jones discovered this recipe, written in Polish and tucked away in a drawer, at the home of her mother, Monica. Monica had recently passed away, and Anita was pleased that she could translate the recipe on her own. (“Kitchen Polish is a lot easier than, say, political Polish,” she laughs.) Today these outstanding spice cookies are her absolute favourite.

Twelve years ago, Joanne MacDonald started preparing baskets of homemade treats for everyone on her massive Christmas list. One by one, the lucky recipients returned their empty baskets in hopes of having them filled again. Joanne obliged, and a highly anticipated holiday tradition was born. This year, Joanne’s baskets will include her award-winning Chocolate Hazelnut Cheesecake Bars, whose recipe she painstakingly created and tested especially for Chatelaine’s Holiday Cookie Contest.

Liz Jones had an extremely close relationship with her grandmother, whom she nicknamed Cupid because “she was just such a sweetheart.” An avid baker, Cupid preferred this recipe for icebox cookies over all others. Whenever Liz makes it – which is often, as she fields requests for these cookies all the time – she’s reminded of the spur-of-the-moment road trips the pair used to take, driving on the highway with the radio off and Cupid chatting the entire way.

These chocolate-cherry confections are perfect for family collaboration: As boys, Michele Iwanus’s sons loved getting their hands sticky rolling out the balls, and now her young stepdaughter has mastered the art of the chocolate dip. Little wonder this no-bake recipe has been passed down through three generations: Michele’s grandmother, Marjorie McDowell, first shared it with Michele’s mother, Kathleen McDowell, in 1974, and now Michele consults a recipe card written in Kathleen’s hand. Every year, Michele makes a big batch for her cookie exchange.

The recipe for these zesty lemon squares came from Bee Vrskovy’s mother-in-law. It took Bee some time to get up the nerve to ask for it, but once she did, it quickly became the ace in her own baking repertoire. She’s written out the recipe countless times over the past 20 years and it’s no wonder. These squares are simple to make, freeze like a dream and are guaranteed to win you over from the first lemony bite.

Forty years ago, as a young newlywed living near the Alaskan border, Mimi Barbour found herself without a holiday cookie recipe. An elderly Scottish neighbour took pity and pulled out a napkin, jotting down the ingredients to her celebrated shortbread – a recipe, she assured Mimi, very rarely given out. More than 30 years later, Mimi ran into the woman’s granddaughter, who lamented that the much-loved shortbread recipe was lost. Mimi gladly handed it over and now both families are able to enjoy these delectable treats.

On the last day of Grade 8, more than 50 years ago, Mary Anna King dropped in on her home-economics teacher, Miss Durnan, for a final goodbye. Miss Durnan invited the young student to flip through her cookbook, and these bars caught Mary Anna’s eye. When the holidays came around that year, Mary Anna pulled out the recipe and perfected it on her first try. She’s baked the bars every Christmas since – finding time between bridge and square dancing – but she’s never been tempted to play around with the ingredients. No sense messing with a sure thing.

Sylvia Ralph bakes up a batch of these roly-poly, melt-in-your-mouth cookies every time her granddaughter, Amanda, comes home from Toronto. (In between vacations, Sylvia keeps Amanda in cookies via Canada Post.) She also relies on this recipe for her church’s annual Christmas bazaar, where the cookies are so popular that a congregation member coerced Sylvia – not one for calling attention to herself – to enter our contest. The rest is cookie history.

Margaret Koriak came across the inspiration for these squares on the back of a bag of raisins. At the time, she was a young girl who loved to bake but had a limited cupboard of ingredients. The first batch wasn’t particularly impressive – “rather dry and disappointing,” she recalls – but Margaret kept tinkering with the recipe. She eventually added some maraschino cherries to dress them up for a cousin’s wedding shower and was much more satisfied with the results. That version has been a family favourite ever since.